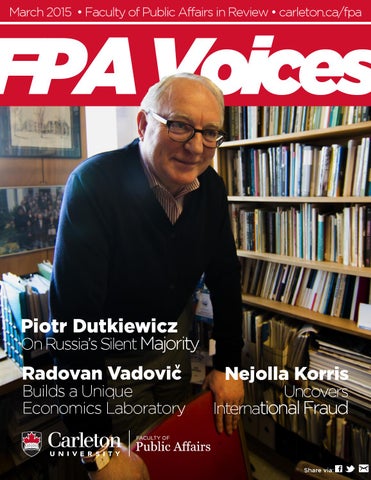 and well-attended seminars featuring researchers from across our Faculty.

In honour of FPA Research Month, we’ve chosen to profile two of our most intriguing researchers for this issue.

Message from our Dean

We’ve just concluded a very successful FPA Research Month, with exciting turnouts for many events, including our Bell and Kesterton Lectures

One of the highlights of the month was the FPA Research Excellence Award Symposium with Piotr Dutkiewicz, a professor of Political Science and European, Russian, and Eurasian Studies and the winner of our 2014 FPA Research Excellence Award. Piotr collaborated with Russian academics to study the effects of the fall of communism on the Russian population. Their research uncovered a “silent majority” of Russians who remain dissatisfied with politics and wary about the future. Learn more about his research in the FPA People section.

And in Field Notes, we profile Economics Professor Radovan Vadovič who was recently awarded a grant by the Canada Foundation for Innovation (CFI) to build a unique laboratory to pursue his research program in behavioural economics. He describes how he plans to use controlled experiments in the study of economic issues and phenomena. Lastly, we interview alumna Nejolla Korris in Career Paths who’s applying her BA in Law to investigate fraud around the world. We hope you enjoy the March issue and, as always, you can reach us at fpavoices@carleton.ca. All the best to you,

Growing up in communist Warsaw in the 1960’s, Piotr Dutkiewicz’s family was part of what he calls the “silenced majority”. Today, as a researcher who specializes in Russian society, he argues that current governments continue to ignore the voices of the majority at their peril.

infatuation of the majority of Polish people who celebrated an end to the ideology and the subordination of the Soviet Union and a closer relationship with Old Europe. But in Russia, I was surrounded by people who were traumatized. This huge country was suddenly divided, had lost its super-power status, and inflation was rising rapidly. They worried what the next day would bring. But there was hope that the people would finally gain a voice in the workings of their country.

What drew you to study the experiences of the Russian people?

More than twenty years later, is the voice of everyday Russians being heard?

I come from a country where the majority of people weren’t involved in key political and economic decisions. So the issue of being consulted, of being incorporated in the decision-making process is not only an academic question, but a very personal question for me.

The “people” are absent from the Russian narrative and discourse. The assumption is that no one is interested in what the average Russian thinks: neither the Russian elite nor the counter-elite (the opposition). They are simply interested in access to power.

You lived in Poland and then Russia during the fall of the Soviet Union. What were the expectations of the majority of people when communism fell? I was living in two worlds. As a Pole, I felt the high hopes, the joy and

So I asked well-known Russian academics, including sociologists, economists, political scientists, and experts in regional studies to contribute to a book about the evolution of Russian society since 1991, to be published later this year. It will answer a few key questions about how the unprivileged mass of the society—the so-called “silent majority”

that makes up 50% of Russians—see themselves, in response to corruption and social disparity. how they act, what they collectively think about politics and economics, and what strategies they I met a man on the train from Moscow to St. are taking to improve their living Petersburg who works in the Kirov machineconditions. building factory. He told me there are two kinds of Russians: those who fly overhead in their private planes and What did this uncover about those who walk on the ground below. That sentiment was peoples’ lives? confirmed by our studies. This is the story of the millions of Russians who, despite all odds and turbulence, maintain the dignity of the country. They are not merely the objects of high-level decisionmaking, but a dynamic, adaptive citizenry. Attitudes and values are changing quickly and adapting to the changing economic environment. In fact, they restrict what those in power can and cannot do in Russia. At the same time, we found the disappointment of the people has been a constant over the past 20 years, particularly

Your book will first be published in Russian. How do you think it will be received by the Russian elite? Our hope is that those in power will recognize that “the people” should be at the centre of their policies. The living situation has slowly improved—poverty has steadily diminished since 2001—but about 50 percent of Russian society is living on the edge of meeting basic needs. We see this as an early warning signal to those in power. The biggest danger for the current elite isn’t the opposition, but the silent majority. Historically, people who are suffering, who don’t get proper care, are inclined to protest.

This is just the tip of the iceberg...

At the Faculty of Public Affairs, educating our students is just the tip of the iceberg. We also offer a wide range of professional institutes that provide hands-on learning experiences in intensive courses such as: • • • • • •

Broaden your understanding of your career and beyond in just two or three days.

Degree and Year: BA Law (06), Carleton University Occupation: CEO and Founder of InterVeritas International, which started as a fraud investigation firm but now is an international consultancy that specializes in linguistic lie detection, social media risk, social engineering, and ethics. Countries visited in past year: I consulted with clients in Austria, Latvia, South Africa, Uganda, Mauritius, Botswana, Malaysia, Singapore, and made endless jaunts to the United States. My clients include professional associations and governments. How did you become a fraud investigator? I ran nonprofits and arts organizations and I found that when they started to have financial trouble, more often than not, there was some sort of fraud within the organization. That’s when it got really interesting. I loved analyzing the problem and identifying where the vulnerabilities were in the organization. How did your law degree help you? I had started my investigation practice in 2000, but I felt I needed a stronger legal background. It allows me to conduct my work on behalf of clients with a strong understanding of the law and its limitations. What do you love about your work? The people I meet. They invite me into their cultures and believe what I have to offer is beneficial to them. A couple of years ago I spoke to the African Chiefs of Protocol Conference, which is led by Helena Burger, formerly Nelson Mandela’s Chief of Protocol. We spent a few days together prior to the conference and I can’t tell you how amazing it was for me to spend time with a woman who was part of South Africa’s post-apartheid shift.

But it can be dangerous. I work with many internal auditors in developing countries who have very dangerous jobs. When I taught a class for the Mexican police, I was escorted by an armed guard all the time, even when I went to my room. I also had a wild ride with a taxi driver in Kenya. That prompted me to create a travel safety class that I give specifically for women. One sentence to describe your strategy to success. Success is measured by the people you meet on the journey—the journey itself is the road to riches.

Our Monthly Profile of an FPA Researcher: Radovan Vadovic

Vadovič’s lab has a few distinguishing features: • All rules of the game are presented upfront and followed throughout. • Participants will typically make decisions in complete privacy. • Participants who make “good” economic decisions will be rewarded with higher monetary payments than others. • All earnings are paid to participants upon completion of the experiment in cash.

Radovan Vadovič is an assistant professor of Economics and the winner of a Canada Foundation for Innovation grant and an Ontario Small Infrastructure grant to build the region’s first experimental economics laboratory at Carleton University. It’s expected to be completed in 2016. The Objective: To study how emotions and heuristics—rules of thumb—influence the economic decisions people make. One example is the marketing slogan that an engagement ring should equal two months’ salary. The Methodology: Participants will play computer games designed by researchers to measure the effects of emotions and heuristics on their decisions. Consider a situation in which one participant is given $10 and has to choose whether to keep it or share it with others. By measuring the amount the participant passes to others, we can determine the importance they place on their own monetary gain. This simple experiment has been used in numerous variations to help us understand why people give to charities, for example, and how to design policies to induce more giving. FPA Voices • Page 7

The Hypothesis: We know from past research that people are more likely to rely on emotions or heuristics as their decisions become more complicated. For instance, they may choose an insurance policy in the middle of the list because in most situations the option at the top has too many features and the one at the bottom lacks features they may need. It’s a simple way to reason around a complicated problem, but marketers have been known to exploit it by making the middle choice more expensive. The Outcomes: The outcomes of Vadovič’s experiments will shed light on how to structure and present information so that people can make more accurate decisions. For instance, a scheme could be designed that presents patients with accessible and balanced statistics on available treatment plans. Quote: “With laboratories like this, economics is taking a step closer to physics—to scientific experimentation. These experiments will allow us to test a collection of theories and conjectures as to how human behaviour functions and dismiss those that are falsified by the data.”

FPA People - continued from page 4: This can take different forms: even if you don’t have an active revolt, people can boycott the election, depriving those in power of legitimacy. What can we in the West learn from the Russian experience? The same economic disparity exists here and is growing, so there is the same danger here. Russia exists in a grey zone between authoritarianism and democracy, economic freedom and political control, liberal democracy and dictatorship. We in western countries are moving into that grey zone as we introduce limitations on freedoms based on a fear of the “other” and, more and more, limitations on means at the disposal of the majority. Our democracy is being eroded. What do you hope for the future of Russian society? To achieve success, leaders of the nation have to have confidence in the peoples’ judgment as to what is better for them in different situations. That’s the only possible democratic stance that can be adopted in practical political life. I hope that a new alignment of political and social forces based on that principle will eventually take place.

Piotr Dutkiewicz is the editor of The Evolution of Russian Society Since 1991: Actors, Attitudes and Practices, which will be published first in Russian by Moscow State University in December and in English by Routledge in January 2016.