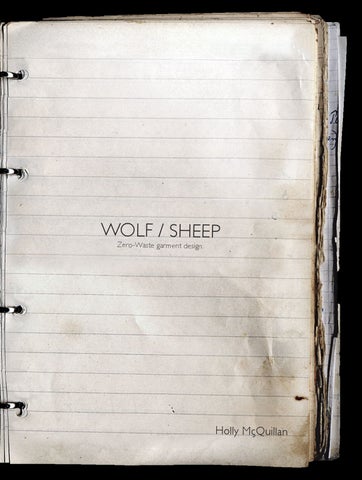 INTRODUCTION Within the fashion industry the resources and energy invested to manufacture cloth and clothing is extraordinary, from the use of non-renewable resources to produce synthetic fibres to the 8000 litres of water used to produce only 1 kilogram of cotton fibre (Fletcher, 2008). And yet today, at a time when clothing has never been so cheap, cloth has become a readily disposable commodity with little value. Indicative of this is the fact that on average 15 â&#x20AC;&#x201C; 20% of cloth needed to produce a garment is unused and the useless remnants are destined for the incinerator, landfill or occasionally as mattress filler (Abernathy et al. 1999; Cooklin, 1997; Feyerabend, 2004). China, one of the worldâ&#x20AC;&#x2122;s largest exporters of textiles and clothing produced 31.8 billion metres of fabric in January to July 2008 alone (Tingting, 2008). You could reasonably estimate that 5 billion metres of that fabric were wasted. This astonishing wastefulness is caused by the entrenched traditions of the fashion industry, which separate the stages of garment design and production into hierarchies where the designers often work isolated from production and the accountant is God. It is a system that fails to acknowledge that textiles are a finished product with energy invested into their design and manufacture, relies on the conviction that we can take from and dump on our planet infinitely, and which seems blind to the reality that the fashion world (and the human world) is part of a natural world.

Planning process of garment design Origin of idea - image of an owl was apparent.

Developed further into a print / garment

DEVELOPING THE WOLF As a child I could see a panther living in the trees lining the road we drove down every day, leaping from tree top to branch, stealthily following our car, but never making that fateful leap. I saw that wolves with yellows eyes lived in the rugged bush on our farm. There was a monster that lived in the lake, ready to pull under any child foolish enough to wander near its dark waters. This mythical natural world was all around me, menacing, and yet somehow also a warning - protective. I was not separate from nature, I was nature and on any given day I could be prey, protector or predator. In the urbanized western world we have come to view Natural as Other – it is easier for us to consume nature if we are not natural ourselves. By viewing ourselves in this way we avoid acknowledging our vulnerability as part of the fragile natural world. The environmental philosopher Val Plumwood in Being Prey (cited in Rothenberg & Ulvaeus. 1999) wrote “in the human supremacist culture of the West there is a strong effort to deny that we humans are also animals positioned in the food chain”, she argues that it is this concept of human identity which distances us from our natural world and places humans as “external manipulators and masters”. This illusion of other-ness enables us to exploit at our peril the world we rely on to survive but every facet of our existence relies at some point on the natural world because we are natural.

Wolf garment pattern - work on both pattern and print while remaining true to the wolf form, and acheiving a desirable garment shape. There is really only one thing i canâ&#x20AC;&#x2122;t change: Fabric width - determined by original manufacturer need to know this before i start. Everything else is can be manipulated depending on the design desired.

Working on the original vector drawing of wolf based on wolf photograph on opposite page.

Due to the nature of this design process it is important that the print and garment form are simultaneously resolved and worked on..

Primarily used to test that the garment hung in a desirable way and that the garment pieces will sew to each other. Front veiw. Some issues with how to use ever y piece of the original pattern

Pattern cut and ready to go.

Pockets and facings removed and sewn

Centre Back insert removed and sewn

Garment hangs well and fits well. Need to make sleeve a little wider. Add eyelets for gathering at waist and at top corners for hanging.

Morphing the sheep scull to fit the garment pattern as defined by my work on the wolf.

Black on dark grey. Image gradually appear s the longer you look at it.

Wanted a slightly more kitsch and streetwear aesthtic - this one is too dark.

Half scale prototype to test print placement and scale in relation to garment.. A few modifications made at this stage. Fabric weight compared to dress form is too stiff - at larger scale should drape more fluidly.

Wolf/Sheep is a fashion product developed through a zerowaste design process, where all parts that are removed for fit or aesthetics are reincorporated back into the garment. Surplus is resource, not to be used for another product at some time in the future but as a resource for itâ&#x20AC;&#x2122;s own creation. Designed around the form of the wolf/sheep head and constrained by the dimensions of the textile, while requiring the goal of fashionable dress; nature, industry and design each play their own part to make the whole. Thematically Wolf/Sheep seeks to explore the precariousness of our self-titled position as masters of nature. In it I explore the shallow deception and denial that revolves around the design, production and consumption of clothing. Wolf /Sheep borrows the allegory of folklore to become a watchful and predatory guardian that deceives both viewer and wearer. We seem to have a choice to make on wearing the garment to become either wolf or sheep, but the position of clothing on our bodies as a communicator and protector of the fragile self throws our understanding of the wolf / sheep dichotomy into disarray and the reality is we become both. Workbook of developement of Zero-waste garment creation encorporating engineered digital textile printing. This work is licensed under the C...

Workbook of developement of Zero-waste garment creation encorporating engineered digital textile printing. This work is licensed under the C...