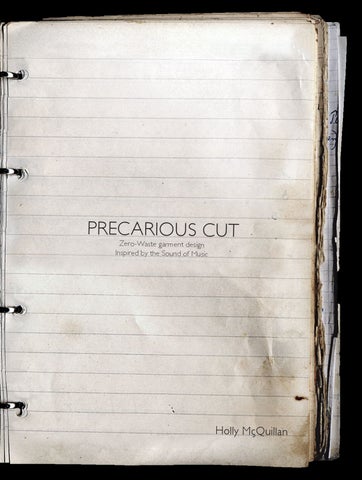 INTRODUCTION Within the fashion industry the resources and energy invested to manufacture cloth and clothing is extraordinary, from the use of non-renewable resources to produce synthetic fibres to the 8000 litres of water used to produce only 1 kilogram of cotton fibre (Fletcher, 2008). And yet today, at a time when clothing has never been so cheap, cloth has become a readily disposable commodity with little value. Indicative of this is the fact that on average 15 â&#x20AC;&#x201C; 20% of cloth needed to produce a garment is unused and the useless remnants are destined for the incinerator, landfill or occasionally as mattress filler (Abernathy et al. 1999; Cooklin, 1997; Feyerabend, 2004). China, one of the worldâ&#x20AC;&#x2122;s largest exporters of textiles and clothing produced 31.8 billion metres of fabric in January to July 2008 alone (Tingting, 2008). You could reasonably estimate that 5 billion metres of that fabric were wasted. This astonishing wastefulness is caused by the entrenched traditions of the fashion industry, which separate the stages of garment design and production into hierarchies where the designers often work isolated from production and the accountant is God. It is a system that fails to acknowledge that textiles are a finished product with energy invested into their design and manufacture, relies on the conviction that we can take from and dump on our planet infinitely, and which seems blind to the reality that the fashion world (and the human world) is part of a natural world.

THE SOUND OF MUSIC

In the film the Sound of Music, Maria makes play clothes for her young charges by cutting up the old curtains in her bedroom. The childrenâ&#x20AC;&#x2122;s father - Colonel Von Trapp - regards it as degrading and shameful for his children to be seen in public in such attire. My intention was to reposition the garish and moderately faded vintage fabric within the realm of high fashion. The combination of Zero-waste production and the use of recycled upholstery fabric for materials also make Precarious Cut a highly sustainable garment. Precarious Cut pushes the limits of my processes while drawing attention to what is possible using this design model. Ultimately I was trying to have as much fun as possible â&#x20AC;&#x201C; it was for play, just as the clothes Maria made the Von Trapp children were.

INITIAL PATTERN DEV. Initial attempt at resolving the problem of how to Zero-waste pattern cut with sizes embedded in pattern - this lead to the overall design for the Coat.

Small scale paper model showing half the coat made as i thought I might put it together at the time. The design of the garment continues throughout construction, so making small models such as this can assist in decision making.

MAKING THE HALF SC ALE

Testing the design at half scale for the first time. This is a time consuming process which would be made much easier with the use of a laser cutter.

The use of black permanent marker to transfer the pattern onto the cloth for this half scale toile lead to the decision to bind the edges of the final garment to draw attention to ithe form. From this test i realised i needed to develop facings for the collar area.

FROM COUCH TO COAT Fabric was soursed from the remnants of a second hand fabric sale held by the fashion department. It was not wanted by itâ&#x20AC;&#x2122;s original owner any longer, and remained unsold after the fabric sale. Probably due to it being a heavy upholstery fabric with a rather large and garish check. There is also fading evident in parts of the cloth. It was a pair of curtains, one half of the pair is now a couch cover in my house, and the other is the coat.

Using Gerber (Patternmaking CAD software) i was able to translate the Illustrator file I work it into a full scale pattern piece and plot it at full scale. This step could be eliminated completely with the use of a lasercutter.

SUMMARY Precarious Cut is a fashion product developed through a zero-waste design process, where all parts that are removed for fit or aesthetics are reincorporated back into the garment so as to eliminate as much of the waste as possible generated during manufacture. Through this pattern cutting process surplus is resource, not to be used for another product at some time in the future but as a resource for it’s own creation. The use of the large check pattern draws attention to complexity of the design and it’s resulting form is exaggerated by the heavy sculptural weight of the cloth, while the use of black bias binding tape on the edges highlights the curvilinear nature of the garment. The resulting garment takes from the domestic environment a sense of comfort and homeliness while evoking uptight Edwardian riding coats, the check is reminiscent of the hunting Swandri, yet it’s structure and form screams high fashion. While designing the garment both edges of the cut fabric need to be considered – success balances on the precarious edge of the scissor. The need to take risks and let go a little while considering all aspects of the design of the garment at once leads to design outcomes that would be difficult to achieve using more traditional methods. Working process of Zero waste garment design practice. Precarious Cut is made from one half of a pair of old curtains - how very "Sound of M...

Working process of Zero waste garment design practice. Precarious Cut is made from one half of a pair of old curtains - how very "Sound of M...