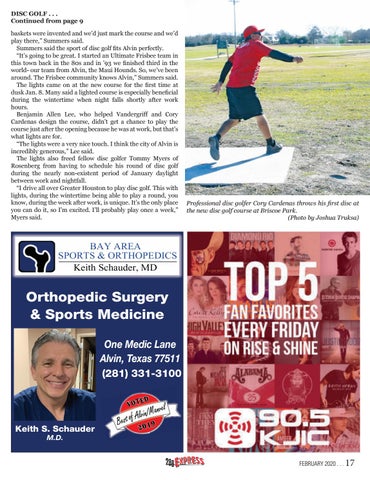 DISC GOLF . . . Continued from page 9 baskets were invented and we’d just mark the course and we’d play there,” Summers said. Summers said the sport of disc golf fits Alvin perfectly. “It’s going to be great. I started an Ultimate Frisbee team in this town back in the 80s and in ’93 we finished third in the world- our team from Alvin, the Maui Hounds. So, we’ve been around. The Frisbee community knows Alvin,” Summers said. The lights came on at the new course for the first time at dusk Jan. 8. Many said a lighted course is especially beneficial during the wintertime when night falls shortly after work hours. Benjamin Allen Lee, who helped Vandergriff and Cory Cardenas design the course, didn’t get a chance to play the course just after the opening because he was at work, but that’s what lights are for. “The lights were a very nice touch. I think the city of Alvin is incredibly generous,” Lee said. The lights also freed fellow disc golfer Tommy Myers of Rosenberg from having to schedule his round of disc golf during the nearly non-existent period of January daylight between work and nightfall. “I drive all over Greater Houston to play disc golf. This with lights, during the wintertime being able to play a round, you know, during the week after work, is unique. It’s the only place you can do it, so I’m excited. I’ll probably play once a week,” Myers said.