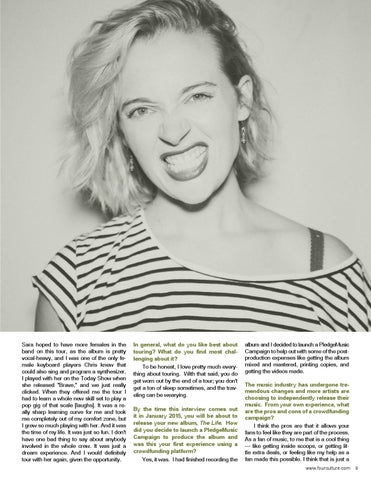 Sara hoped to have more females in the band on this tour, as the album is pretty vocal-heavy, and I was one of the only female keyboard players Chris knew that could also sing and program a synthesizer. I played with her on the Today Show when she released "Brave," and we just really clicked. When they offered me the tour I had to learn a whole new skill set to play a pop gig of that scale [laughs]. It was a really sharp learning curve for me and took me completely out of my comfort zone, but I grew so much playing with her. And it was the time of my life. It was just so fun. I don't have one bad thing to say about anybody involved in the whole crew. It was just a dream experience. And I would definitely tour with her again, given the opportunity.

In general, what do you like best about touring? What do you find most challenging about it? To be honest, I love pretty much everything about touring. With that said, you do get worn out by the end of a tour; you don't get a ton of sleep sometimes, and the traveling can be wearying. By the time this interview comes out it in January 2015, you will be about to release your new album, The Life. How did you decide to launch a PledgeMusic Campaign to produce the album and was this your first experience using a crowdfunding platform? Yes, it was. I had finished recording the

album and I decided to launch a PledgeMusic Campaign to help out with some of the postproduction expenses like getting the album mixed and mastered, printing copies, and getting the videos made. The music industry has undergone tremendous changes and more artists are choosing to independently release their music. From your own experience, what are the pros and cons of a crowdfunding campaign? I think the pros are that it allows your fans to feel like they are part of the process. As a fan of music, to me that is a cool thing â&#x20AC;&#x201D; like getting inside scoops, or getting little extra deals, or feeling like my help as a fan made this possible. I think that is just a www.fourculture.com 9