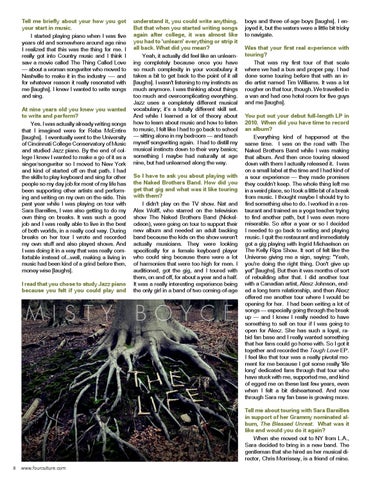 Tell me briefly about your how you got your start in music. I started playing piano when I was five years old and somewhere around age nine I realized that this was the thing for me. I really got into Country music and I think I saw a movie called The Thing Called Love — about a woman songwriter who moved to Nashville to make it in the industry -— and for whatever reason it really resonated with me [laughs]. I knew I wanted to write songs and sing. At nine years old you knew you wanted to write and perform? Yes. I was actually already writing songs that I imagined were for Reba McEntire [laughs]. I eventually went to the University of Cincinnati College Conservatory of Music and studied Jazz piano. By the end of college I knew I wanted to make a go of it as a singer/songwriter so I moved to New York and kind of started off on that path. I had the skills to play keyboard and sing for other people so my day job for most of my life has been supporting other artists and performing and writing on my own on the side. This past year while I was playing on tour with Sara Bareilles, I was also getting to do my own thing on breaks. It was such a good job and I was really able to live in the best of both worlds, in a really cool way. During breaks on her tour I wrote and recorded my own stuff and also played shows. And I was doing it in a way that was really comfortable instead of...well, making a living in music had been kind of a grind before then, money wise [laughs].

understand it, you could write anything. But that when you started writing songs again after college, it was almost like you had to 'unlearn' everything or strip it all back. What did you mean? Yeah, it actually did feel like an unlearning completely because once you have so much complexity in your vocabulary it takes a bit to get back to the point of it all [laughs]. I wasn't listening to my instincts as much anymore. I was thinking about things too much and overcomplicating everything. Jazz uses a completely different musical vocabulary; it’s a totally different skill set. And while I learned a lot of theory about how to learn about music and how to listen to music, I felt like I had to go back to school — sitting alone in my bedroom — and teach myself songwriting again. I had to distill my musical instincts down to their very basics; something I maybe had naturally at age nine, but had unlearned along the way.

So I have to ask you about playing with the Naked Brothers Band. How did you get that gig and what was it like touring with them? I didn't play on the TV show. Nat and Alex Wolff, who starred on the television show The Naked Brothers Band (Nickelodeon), were going on tour to support their new album and needed an adult backing band because the kids on the show weren't actually musicians. They were looking specifically for a female keyboard player who could sing because there were a lot of harmonies that were too high for men. I auditioned, got the gig, and I toured with them, on and off, for about a year and a half. I read that you chose to study Jazz piano It was a really interesting experience being because you felt if you could play and the only girl in a band of two coming-of-age

boys and three of-age boys [laughs]. I enjoyed it, but the waters were a little bit tricky to navigate. Was that your first real experience with touring? That was my first tour of that scale where we had a bus and proper pay. I had done some touring before that with an indie artist named Tim Williams. It was a lot rougher on that tour, though. We travelled in a van and had one hotel room for five guys and me [laughs]. You put out your debut full-length LP in 2010. When did you have time to record an album? Everything kind of happened at the same time. I was on the road with The Naked Brothers Band while I was making that album. And then once touring slowed down with them I actually released it. I was on a small label at the time and I had kind of a sour experience — they made promises they couldn’t keep. The whole thing left me in a weird place, so I took a little bit of a break from music. I thought maybe I should try to find something else to do. I worked in a restaurant and trained as a yoga teacher trying to find another path, but I was even more miserable. So after a year or so I decided I needed to go back to writing and playing music. I quit the restaurant and immediately got a gig playing with Ingrid Michaelson on The Kelly Ripa Show. It sort of felt like the Universe giving me a sign, saying: "Yeah, you're doing the right thing. Don't give up yet" [laughs]. But then it was months of sort of rebuilding after that. I did another tour with a Canadian artist, Alexz Johnson, ended a long term relationship, and then Alexz offered me another tour where I would be opening for her. I had been writing a lot of songs — especially going through the break up — and I knew I really needed to have something to sell on tour if I was going to open for Alexz. She has such a loyal, rabid fan base and I really wanted something that her fans could go home with. So I got it together and recorded the Tough Love EP. I feel like that tour was a really pivotal moment for me because I got some really 'life long' dedicated fans through that tour who have stuck with me, supported me, and kind of egged me on these last few years, even when I felt a bit disheartened. And now through Sara my fan base is growing more. Tell me about touring with Sara Bareilles in support of her Grammy nominated album, The Blessed Unrest. What was it like and would you do it again? When she moved out to NY from L.A., Sara decided to bring in a new band. The gentleman that she hired as her musical director, Chris Morrissey, is a friend of mine.