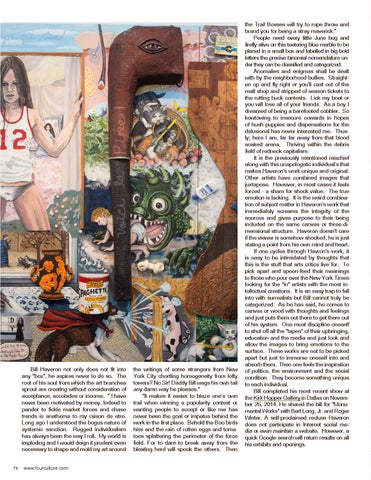 Bill Haveron not only does not fit into any "box", he aspires never to do so. The root of his soul from which the art branches sprout are creating without consideration of acceptance, accolades or income. " I have never been motivated by money. Indeed to pander to fickle market forces and chase trends is anathema to my raison de etre. Long ago I understood the bogus nature of systemic sanction. Rugged individualism has always been the way I roll. My world is imploding and I would deign it prudent even necessary to shape and mold my art around 74 www.fourculture.com

the writings of some strangers from New York City chortling homogeneity from lofty towers? No Sir! Daddy Bill wags his own tail any damn way he pleases." "It makes it easier to blaze oneâ&#x20AC;&#x2122;s own trail when winning a popularity contest or wanting people to accept or like me has never been the goal or impetus behind the work in the first place. Behold the Boo birds hiss and the rain of rotten eggs and tomatoes splattering the perimeter of the force field. For to dare to break away from the bleating herd will spook the others. Then

the Trail Bosses will try to rope throw and brand you for being a stray maverick." People need every little June bug and firefly alive on this teetering blue marble to be placed in a small box and labelled in big bold letters the precise binomial nomenclature under they can be classified and categorized. Anomalies and enigmas shall be dealt with by the neighborhood bullies. Straighten up and fly right or youâ&#x20AC;&#x2122;ll cast out of the malt shop and stripped of season tickets to the rutting buck contests. Lick my boot or you will lose all of your friends. As a boy I dreamed of being a barefooted cobbler. So kowtowing to insecure cowards in hopes of hush puppies and dispensations for the delusional has never interested me. Thusly; here I am, far far away from that blood soaked arena. Thriving within the debris field of redneck capitalism. It is the previously mentioned mischief along with this unapologetic individualâ&#x20AC;&#x2122;s that makes Haveron's work unique and original. Other artists have combined images that juxtapose. However, in most cases it feels forced - a sham for shock value. The true emotion is lacking. It is the weird combination of subject matter in Haveron's work that immediately screams the integrity of the sources and gives purpose to their being included on the same canvas or three-dimensional structure. Haveron doesn't care if the viewer is somehow shocked, he is just stating a point from his own mind and heart. If one cycles through Havron's work, it is easy to be intimidated by thoughts that this is the stuff that arts critics live for. To pick apart and spoon-feed their meanings to those who pour over the New York Times looking for the "in" artists with the most intellectual creations. It is an easy trap to fall into with surrealists but Bill cannot truly be categorized. As he has said, he comes to canvas or wood with thoughts and feelings and just puts them out there to get them out of his system. One must discipline oneself to shut off all the "tapes" of their upbringing, education and the media and just look and allow the images to bring emotions to the surface. These works are not to be picked apart but just to immerse oneself into and absorb them. Then one feels the inspiration of politics, the environment and the social condition. They become something unique to each individual. Bill completed his most recent show at the Kirk Hopper Gallery in Dallas on November 26, 2014. He shared the bill for "Monumental Works" with Bert Long, Jr. and Roger Winter. A self-proclaimed recluse Haveron does not participate in Internet social media or even maintain a website. However, a quick Google search will return results on all his exhibits and openings.