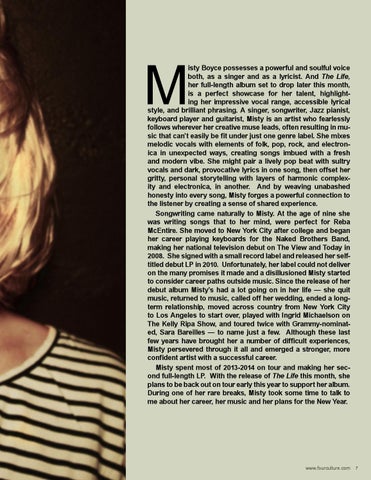 isty Boyce possesses a powerful and soulful voice both, as a singer and as a lyricist. And The Life, her full-length album set to drop later this month, is a perfect showcase for her talent, highlighting her impressive vocal range, accessible lyrical style, and brilliant phrasing. A singer, songwriter, Jazz pianist, keyboard player and guitarist, Misty is an artist who fearlessly follows wherever her creative muse leads, often resulting in music that can’t easily be fit under just one genre label. She mixes melodic vocals with elements of folk, pop, rock, and electronica in unexpected ways, creating songs imbued with a fresh and modern vibe. She might pair a lively pop beat with sultry vocals and dark, provocative lyrics in one song, then offset her gritty, personal storytelling with layers of harmonic complexity and electronica, in another. And by weaving unabashed honesty into every song, Misty forges a powerful connection to the listener by creating a sense of shared experience. Songwriting came naturally to Misty. At the age of nine she was writing songs that to her mind, were perfect for Reba McEntire. She moved to New York City after college and began her career playing keyboards for the Naked Brothers Band, making her national television debut on The View and Today in 2008. She signed with a small record label and released her selftitled debut LP in 2010. Unfortunately, her label could not deliver on the many promises it made and a disillusioned Misty started to consider career paths outside music. Since the release of her debut album Misty’s had a lot going on in her life — she quit music, returned to music, called off her wedding, ended a longterm relationship, moved across country from New York City to Los Angeles to start over, played with Ingrid Michaelson on The Kelly Ripa Show, and toured twice with Grammy-nominated, Sara Bareilles — to name just a few. Although these last few years have brought her a number of difficult experiences, Misty persevered through it all and emerged a stronger, more confident artist with a successful career. Misty spent most of 2013-2014 on tour and making her second full-length LP. With the release of The Life this month, she plans to be back out on tour early this year to support her album. During one of her rare breaks, Misty took some time to talk to me about her career, her music and her plans for the New Year.