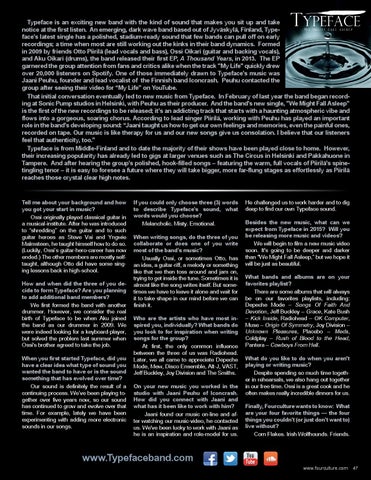 Typeface is an exciting new band with the kind of sound that makes you sit up and take notice at the first listen. An emerging, dark wave band based out of Jyväskylä, Finland, Typeface’s latest single has a polished, stadium-ready sound that few bands can pull off on early recordings; a time when most are still working out the kinks in their band dynamics. Formed in 2009 by friends Otto Piirilä (lead vocals and bass), Ossi Oikari (guitar and backing vocals), and Aku Oikari (drums), the band released their first EP, A Thousand Years, in 2013. The EP garnered the group attention from fans and critics alike when the track "My Life" quickly drew over 20,000 listeners on Spotify. One of those immediately drawn to Typeface’s music was Jaani Peuhu, founder and lead vocalist of the Finnish band Iconcrash. Peuhu contacted the group after seeing their video for “My Life” on YouTube. That initial conversation eventually led to new music from Typeface. In February of last year the band began recording at Sonic Pump studios in Helsinki, with Peuhu as their producer. And the band’s new single, "We Might Fall Asleep” is the first of the new recordings to be released; it’s an addicting track that starts with a haunting atmospheric vibe and flows into a gorgeous, soaring chorus. According to lead singer Piirilä, working with Peuhu has played an important role in the band’s developing sound: “Jaani taught us how to get our own feelings and memories, even the painful ones, recorded on tape. Our music is like therapy for us and our new songs give us consolation. I believe that our listeners feel that authenticity, too.” Typeface is from Middle-Finland and to date the majority of their shows have been played close to home. However, their increasing popularity has already led to gigs at larger venues such as The Circus in Helsinki and Pakkahuone in Tampere. And after hearing the group’s polished, hook-filled songs – featuring the warm, full vocals of Piirilä’s spinetingling tenor – it is easy to foresee a future where they will take bigger, more far-flung stages as effortlessly as Piirilä reaches those crystal clear high notes. Tell me about your background and how you got your start in music? Ossi originally played classical guitar in a musical-institute. After he was introduced to “shredding” on the guitar and to such guitar heroes as Steve Vai and Yngwie Malmsteen, he taught himself how to do so. (Luckily, Ossi’s guitar-hero-career has now ended.) The other members are mostly selftaught, although Otto did have some singing lessons back in high-school. How and when did the three of you decide to form Typeface? Are you planning to add additional band members? We first formed the band with another drummer. However, we consider the real birth of Typeface to be when Aku joined the band as our drummer in 2009. We were indeed looking for a keyboard-player, but solved the problem last summer when Ossi's brother agreed to take the job. When you first started Typeface, did you have a clear idea what type of sound you wanted the band to have or is the sound something that has evolved over time? Our sound is definitely the result of a continuing process. We’ve been playing together over five years now, so our sound has continued to grow and evolve over that time. For example, lately we have been experimenting with adding more electronic sounds in our songs.

If you could only choose three (3) words He challenged us to work harder and to dig to describe Typeface’s sound, what deep to find our own Typeface sound. words would you choose? Besides the new music, what can we Melancholic. Misty. Emotional. expect from Typeface in 2015? Will you When writing songs, do the three of you be releasing more music and videos? We will begin to film a new music video collaborate or does one of you write soon. It's going to be deeper and darker most of the band’s music? Usually Ossi, or sometimes Otto, has than "We Might Fall Asleep,” but we hope it an idea, a guitar-riff, a melody or something will be just as beautiful. like that we then toss around and jam on, trying to get inside the tune. Sometimes it is What bands and albums are on your almost like the song writes itself. But some- favorites playlist? There are some albums that will always times we have to leave it alone and wait for it to take shape in our mind before we can be on our favorites playlists, including: Depeche Mode – Songs Of Faith And finish it. Devotion, Jeff Buckley – Grace, Kate Bush Who are the artists who have most in- – Kick Inside, Radiohead – OK Computer, spired you, individually? What bands do Muse – Origin Of Symmetry, Joy Division – you look to for inspiration when writing Unknown Pleasures, Placebo – Meds, Coldplay – Rush of Blood to the Head, songs for the group? At first, the only common influence Pantera – Cowboys From Hell. between the three of us was Radiohead. Later, we all came to appreciate Depeche What do you like to do when you aren't Mode, Mew, Disco Ensemble, Alt-J, VAST, playing or writing music? Despite spending so much time togethJeff Buckley, Joy Division and The Smiths. er in rehearsals, we also hang out together On your new music you worked in the in our free time. Ossi is a great cook and he studio with Jaani Peuhu of Iconcrash. often makes really incredible dinners for us. How did you connect with Jaani and what has it been like to work with him? Finally, Fourculture wants to know: What Jaani found our music on-line and af- are your four favorite things — the four ter watching our music-video, he contacted things you couldn’t (or just don’t want to) us. We've been lucky to work with Jaani as live without? Corn Flakes. Irish Wolfhounds. Friends. he is an inspiration and role-model for us.