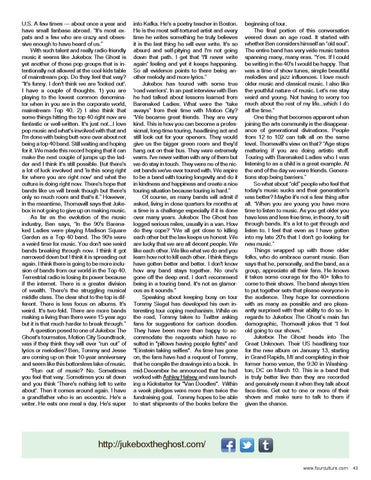 U.S. A few times — about once a year and have small fanbase abroad. “It's most expats and a few who are crazy and obsessive enough to have heard of us.” With such talent and really radio-friendly music it seems like Jukebox The Ghost is yet another of those pop groups that is intentionally not allowed at the cool-kids table of mainstream pop. Do they feel that way? “It's funny. I don't think we are 'locked out'. I have a couple of thoughts. 1) you are playing to the lowest common denominator when in you are in the corporate world, mainstream Top 40. 2) I also think that some things hitting the top 40 right now are fantastic or well-written. It's just not...I love pop music and what's involved with that and I'm done with being butt-sore over about not being a top 40 band. Still waiting and hoping for it. We made this record hoping that it can make the next couple of jumps up the ladder and I think it's still possible. But there's a lot of luck involved and 'is this song right for where you are right now' and what the culture is doing right now. There's hope that bands like us will break though but there's only so much room and that's it.” However, in the meantime, Thornewill says that Jukebox is not going to give up on making music. As far as the evolution of the music industry, Ben says, “In the 90's Barenaked Ladies were playing Madison Square Garden as a Top 40 band. The 90's were a weird time for music. You don't see weird bands breaking through now. I think it got narrowed down but I think it is spreading out again. I think there is going to be more inclusion of bands from our world in the Top 40. Terrestrial radio is losing its power because if the internet. There is a greater division of wealth. There's the struggling musical middle class. The clear shot to the top is different. There is less focus on albums. It's weird. It's two-fold. There are more bands making a living than there were 15 year ago but it is that much harder to break through.” A question posed to one of Jukebox The Ghost's tourmates, Motion City Soundtrack, was if they think they will ever “run out” of lyrics or melodies? Ben, Tommy and Jesse are coming up on their 10-year anniversary and seem like this bottomless lake of music. “Run out of music? No. Sometimes you feel that way. Sometimes you sit down and you think 'There's nothing left to write about'. Then it comes around again. I have a grandfather who is an eccentric. He's a writer. He eats one meal a day. He's super

into Kafka. He's a poetry teacher in Boston. He is the most self-tortured artist and every time he writes something he truly believes it is the last thing he will ever write. It's so absurd and self-pitying and I'm not going down that path. I get that 'I'll never write again' feeling and yet it keeps happening. So all evidence points to there being another melody and more lyrics.” Jukebox has toured with some true 'road warriors'. In an past interview with Ben he had talked about lessons learned from Barenaked Ladies. What were the “take aways” from their time with Motion City? “We became great friends. They are very kind. This is how you can become a professional, long-time touring, headlining act and still look out for your openers. They would give us the bigger green room and they'd hang out on their bus. They were extremely warm. I've never written with any of them but we do stay in touch. They were ne of the nicest bands we've ever toured with. We aspire to be a band with touring longevity and do it in kindness and happiness and create a nice touring situation because touring is hard.” Of course, as many bands will admit if asked, living in close quarters for months at a time is a challenge especially if it is done over many years. Jukebox The Ghost has logged serious miles, usually in a van. How do they cope? “We all get close to killing each other but the law keeps us honest. We are lucky that we are all decent people. We like each other. We like what we do and you learn how not to kill each other. I think things have gotten better and better. I don't know how any band stays together. No one's gone off the deep end. I don't recommend being in a touring band. It's not as glamorous as it sounds.” Speaking about keeping busy on tour Tommy Siegel has developed his own interesting tour coping mechanism. While on the road, Tommy takes to Twitter asking fans for suggestions for cartoon doodles. They have been more than happy to accommodate the requests which have resulted in "pillows having people fights" and "Einstein taking selfies". As time has gone on, the fans have had a request of Tommy, that he compile the drawings into a book. In mid-December he announced that he had worked with Ashley Halsey and was launching a Kickstarter for "Van Doodles". Within a week pledges were more than twice the fundraising goal. Tommy hopes to be able to start shipments of the books before the

beginning of tour. The final portion of this conversation veered down an age road. It started with whether Ben considers himself an “old soul”. The entire band has very wide music tastes spanning many, many eras. “Yes. If I could be writing in the 40's I would be happy. That was a time of show tunes, simple beautiful melodies and jazz influences. I love much older music and classical music. I also like the youthful nature of music. Let's me stay weird and young. Not having to worry too much about the rest of my life...which I do all the time.” One thing that becomes apparent when joining the arts community is the disappearance of generational divinations. People from 12 to 102 can talk all on the same level. Thornewill's view on that? “Age stops mattering if you are doing artistic stuff. Touring with Barenaked Ladies who I was listening to as a child is a great example. At the end of the day we were friends. Generations stop being barriers.” So what about “old” people who feel that today's music sucks and their generation's was better? Maybe it's not a fear thing after all. “When you are young you have more time to listen to music. As you get older you have less and less free time, in theory, to sift through bands. It's a lot to get through and listen to. I feel that even as I have gotten into my late 20's that I don't go looking for new music.” Things wrapped up with those older folks, who do embrace current music. Ben says that he, personally, and the band, as a group, appreciate all their fans. He knows it takes some courage for the 40+ folks to come to their shows. The band always tries to put together sets that please everyone in the audience. They hope for connections with as many as possible and are pleasantly surprised with their ability to do so. In regards to Jukebox The Ghost’s main fan demographic, Thornewill jokes that “I feel old going to our shows.” Jukebox The Ghost heads into The Great Unknown. Their US headlining tour for the new album on January 13, starting in Grand Rapids, MI and completing in their former home venue, the 9:30 in Washington, DC on March 10. This is a band that is truly better live than they are recorded and genuinely mean it when they talk about face-time. Get out to one or more of their shows and make sure to talk to them if given the chance.