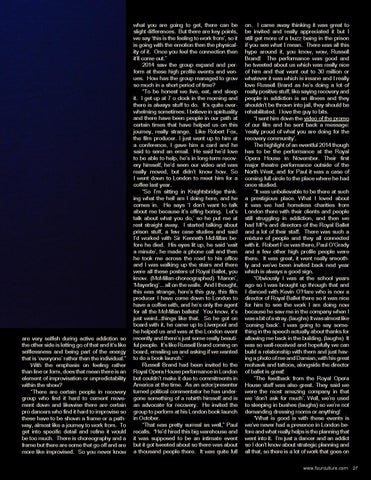 are very selfish during active addiction so the other side is letting go of that and it’s like selflessness and being part of the energy that is ‘everyone’ rather than the individual.” With the emphasis on feeling rather than line or form, does that mean there is an element of improvisation or unpredictability within the show? “There are certain people in recovery group who find it hard to cement movement down and likewise there are certain pro dancers who find it hard to improvise so these have to be shown a frame or a pathway, almost like a journey to work from. To get into specific detail and refine it would be too much. There is choreography and a frame but there are some that go off and are more like improvised. So you never know

what you are going to get, there can be slight differences. But there are key points, we say ‘this is the feeling to work from’, so it is going with the emotion then the physicality of it. Once you feel the connection then it’ll come out.” 2014 saw the group expand and perform at these high profile events and venues. How has the group managed to grow so much in a short period of time? “To be honest we live, eat, and sleep it. I get up at 7 o clock in the morning and there is always stuff to do. It’s quite overwhelming sometimes. I believe in spirituality and there have been people in our path at certain times that have helped us on this journey, really strange. Like Robert Fox, the film producer. I just went up to him at a conference, I gave him a card and he said to send an email. He said he’d love to be able to help, he’s in long-term recovery himself, he’d seen our video and was really moved, but didn’t know how. So I went down to London to meet him for a coffee last year. “So I’m sitting in Knightsbridge thinking what the hell am I doing here, and he comes in. He says ‘I don’t want to talk about me because it’s effing boring. Let’s talk about what you do,’ so he put me at rest straight away. I started talking about prison stuff, a few case studies and said I’d worked with Sir Kenneth McMillan before he died. His eyes lit up, he said ‘wait a minute’, he made a phone call and then he took me across the road to his office and I was walking up the stairs and there were all these posters of Royal Ballet, you know. (McMillan-choreographed) ‘Manon’, ‘Mayerling’... all on the walls. And I thought, this was strange, here’s this guy, this film producer I have come down to London to have a coffee with, and he’s only the agent for all the McMillan ballets! You know, it’s just weird...things like that. So he got on board with it, he came up to Liverpool and he helped us and was at the London event recently and there’s just some really beautiful people. It’s like Russell Brand coming on board, emailing us and asking if we wanted to do a book launch.’ Russell Brand had been invited to the Royal Opera House performance in London but couldn’t make it due to commitments in America at the time. As an actor/presenter turned political commentator he has undergone something of a rebirth himself and is an advocate for recovery. He invited the group to perform at his London book launch in October. “That was pretty surreal as well,” Paul recalls. “He’d hired this big warehouse and it was supposed to be an intimate event but it got tweeted about so there was about a thousand people there. It was quite full

on. I came away thinking it was great to be invited and really appreciated it but I still get more of a buzz being in the prison if you see what I mean. There was all this hype around it, you know, wow, Russell Brand! The performance was good and he tweeted about us which was really nice of him and that went out to 30 million or whatever it was which is insane and I really love Russell Brand as he’s doing a lot of really positive stuff, like saying recovery and people in addiction is an illness and they shouldn’t be thrown into jail, they should be rehabilitated. I love the guy to bits. “I sent him down the video of the promo of our film and he sent back a message: ‘really proud of what you are doing for the recovery community’. The highlight of an eventful 2014 though has to be the performance at the Royal Opera House in November. Their first major theatre performance outside of the North West, and for Paul it was a case of coming full circle to the place where he had once studied. “It was unbelievable to be there at such a prestigious place. What I loved about it was we had homeless charities from London there with their clients and people still struggling in addiction, and then we had MPs and directors of the Royal Ballet and a lot of their staff. There was such a mixture of people and they all connected with it. Robert Fox was there, Paul O’Grady and a few other high profile people were there. It was great, it went really smoothly and we’ve been invited back next year which is always a good sign. “Obviously I was at the school years ago so I was brought up through that and I danced with Kevin O’Hare who is now a director of Royal Ballet there so it was nice for him to see the work I am doing now because he saw me in the company when I was a bit of a stray. (laughs) It was almost like ‘coming back’. I was going to say something in the speech actually about thanks for allowing me back in the building. (laughs) It was so well-received and hopefully we can build a relationship with them and just having a photo of me and Damian, with his great mohawk and tattoos, alongside the director of ballet is great! “The feedback from the Royal Opera House staff was also great. They said we were the most amazing company in that we ‘don’t ask for much’. Well, we’re used to sleeping in bushes (laughs) so we’re not demanding dressing rooms or anything! “What is good is with these events is we’ve never had a presence in London before and what really helps is the planning that went into it. I’m just a dancer and an addict so I don’t know about strategic planning and all that, so there is a lot of work that goes on www.fourculture.com 27