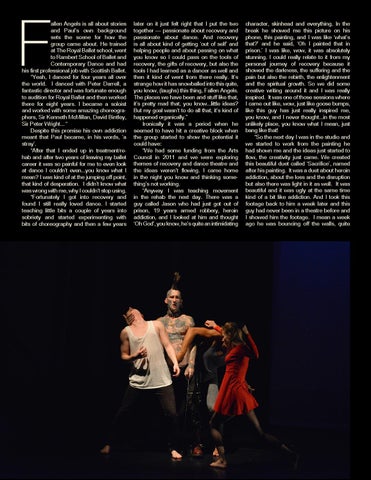 allen Angels is all about stories and Paul’s own background sets the scene for how the group came about. He trained at The Royal Ballet school, went to Rambert School of Ballet and Contemporary Dance and had his first professional job with Scottish Ballet. “Yeah, I danced for four years all over the world. I danced with Peter Darrell, a fantastic director and was fortunate enough to audition for Royal Ballet and then worked there for eight years. I became a soloist and worked with some amazing choreographers, Sir Kenneth McMillan, David Bintley, Sir Peter Wright... “ Despite this promise his own addiction meant that Paul became, in his words, ‘a stray’. “After that I ended up in treatment/rehab and after two years of leaving my ballet career it was so painful for me to even look at dance I couldn’t even...you know what I mean? I was kind of at the jumping off point, that kind of desperation. I didn’t know what was wrong with me, why I couldn’t stop using. “Fortunately I got into recovery and found I still really loved dance. I started teaching little bits a couple of years into sobriety and started experimenting with bits of choreography and then a few years

later on it just felt right that I put the two together — passionate about recovery and passionate about dance. And recovery is all about kind of getting ‘out of self’ and helping people and about passing on what you know so I could pass on the tools of recovery, the gifts of recovery, but also the tools I had learned as a dancer as well and then it kind of went from there really. It’s strange how it has snowballed into this quite, you know, (laughs) this thing, Fallen Angels. The places we have been and stuff like that, it’s pretty mad that, you know...little ideas? But my goal wasn’t to do all that, it’s kind of happened organically.” Ironically it was a period when he seemed to have hit a creative block when the group started to show the potential it could have: “We had some funding from the Arts Council in 2011 and we were exploring themes of recovery and dance theatre and the ideas weren’t flowing. I came home in the night you know and thinking something’s not working. “Anyway I was teaching movement in the rehab the next day. There was a guy called Jason who had just got out of prison, 19 years armed robbery, heroin addiction, and I looked at him and thought ‘Oh God’, you know, he’s quite an intimidating

character, skinhead and everything. In the break he showed me this picture on his phone, this painting, and I was like ‘what’s that?’ and he said, ‘Oh I painted that in prison.’ I was like, wow, it was absolutely stunning. I could really relate to it from my personal journey of recovery because it showed the darkness, the suffering and the pain but also the rebirth, the enlightenment and the spiritual growth. So we did some creative writing around it and I was really inspired. It was one of those sessions where I came out like, wow, just like goose bumps, like this guy has just really inspired me, you know, and I never thought...in the most unlikely place, you know what I mean, just bang like that! “So the next day I was in the studio and we started to work from the painting he had shown me and the ideas just started to flow, the creativity just came. We created this beautiful duet called ‘Sacrifice’, named after his painting. It was a duet about heroin addiction, about the loss and the disruption but also there was light in it as well. It was beautiful and it was ugly at the same time kind of a bit like addiction. And I took this footage back to him a week later and this guy had never been in a theatre before and I showed him the footage. I mean a week ago he was bouncing off the walls, quite