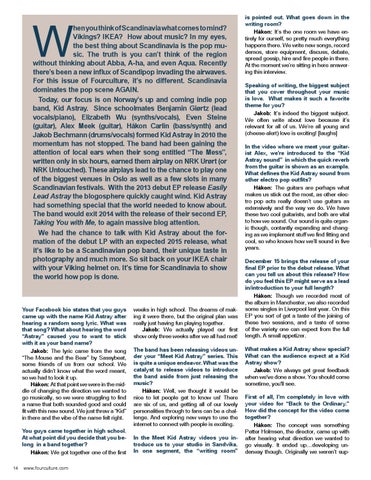 hen you think of Scandinavia what comes to mind? Vikings? IKEA? How about music? In my eyes, the best thing about Scandinavia is the pop music. The truth is you can’t think of the region without thinking about Abba, A-ha, and even Aqua. Recently there’s been a new influx of Scandipop invading the airwaves. For this issue of Fourculture, it’s no different. Scandinavia dominates the pop scene AGAIN. Today, our focus is on Norway’s up and coming indie pop band, Kid Astray. Since schoolmates Benjamin Giørtz (lead vocals/piano), Elizabeth Wu (synths/vocals), Even Steine (guitar), Alex Meek (guitar), Håkon Carlin (bass/synth) and Jakob Bechmann (drums/vocals) formed Kid Astray in 2010 the momentum has not stopped. The band had been gaining the attention of local ears when their song entitled “The Mess”, written only in six hours, earned them airplay on NRK Urørt (or NRK Untouched). These airplays lead to the chance to play one of the biggest venues in Oslo as well as a few slots in many Scandinavian festivals. With the 2013 debut EP release Easily Lead Astray the blogosphere quickly caught wind. Kid Astray had something special that the world needed to know about. The band would exit 2014 with the release of their second EP, Taking You with Me, to again massive blog attention. We had the chance to talk with Kid Astray about the formation of the debut LP with an expected 2015 release, what it’s like to be a Scandinavian pop band, their unique taste in photography and much more. So sit back on your IKEA chair with your Viking helmet on. It’s time for Scandinavia to show the world how pop is done.

Your Facebook bio states that you guys came up with the name Kid Astray after hearing a random song lyric. What was that song? What about hearing the word “Astray” caused you to want to stick with it as your band name? Jakob: The lyric came from the song “The Mouse and the Bear” by Sassybeat, some friends of us from our school. We actually didn’t know what the word meant, so we had to look it up. Håkon: At that point we were in the middle of changing the direction we wanted to go musically, so we were struggling to find a name that both sounded good and could fit with this new sound. We just threw a “Kid” in there and the vibe of the name felt right.

weeks in high school. The dreams of making it were there, but the original plan was really just having fun playing together. Jakob: We actually played our first show only three weeks after we all had met! The band has been releasing videos under your “Meet Kid Astray” series. This is quite a unique endeavor. What was the catalyst to release videos to introduce the band aside from just releasing the music? Håkon: Well, we thought it would be nice to let people get to know us! There are six of us, and getting all of our lovely personalities through to fans can be a challenge. And exploring new ways to use the internet to connect with people is exciting.

is pointed out. What goes down in the writing room? Håkon: It’s the one room we have entirely for ourself, so pretty much everything happens there. We write new songs, record demos, store equipment, discuss, debate, spread gossip, hire and fire people in there. At the moment we’re sitting in here answering this interview. Speaking of writing, the biggest subject that you cover throughout your music is love. What makes it such a favorite theme for you? Jakob: It’s indeed the biggest subject. We often write about love because it’s relevant for all of us. We’re all young and (cheese-alert) love is exciting! [laughs] In the video where we meet your guitarist Alex, we’re introduced to the “Kid Astray sound” in which the quick reverb from the guitar is shown as an example. What defines the Kid Astray sound from other electro pop outfits? Håkon: The guitars are perhaps what makes us stick out the most, as other electro pop acts really doesn’t use guitars as extensively and the way we do. We have these two cool guitarists, and both are vital to how we sound. Our sound is quite organic though, contantly expanding and changing as we implement stuff we find fitting and cool, so who knows how we’ll sound in five years. December 15 brings the release of your final EP prior to the debut release. What can you tell us about this release? How do you feel this EP might serve as a lead in/introduction to your full length? Håkon: Though we recorded most of the album in Manchester, we also recorded some singles in Liverpool last year. On this EP you sort of get a taste of the joining of these two sessions, and a taste of some of the variety one can expect from the full length. A small appetizer. What makes a Kid Astray show special? What can the audience expect at a Kid Astray show? Jakob: We always get great feedback when we've done a show. You should come sometime, you'll see.

First of all, I’m completely in love with your video for “Back to the Ordinary.” How did the concept for the video come together? Håkon: The concept was something You guys came together in high school. Petter Holmsen, the director, came up with At what point did you decide that you be- In the Meet Kid Astray videos you in- after hearing what direction we wanted to troduce us to your studio in Sandvika. go visually. It ended up…developing unlong in a band together? Håkon: We got together one of the first In one segment, the “writing room” derway though. Originally we weren’t sup-