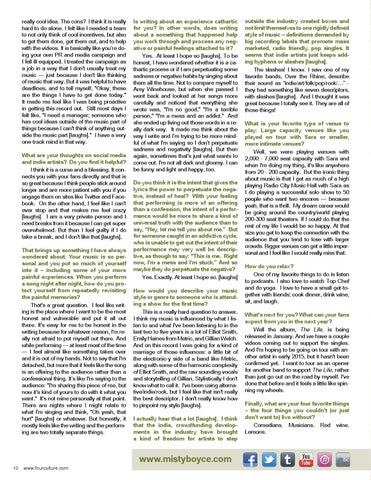 Is writing about an experience cathartic for you? In other words, does writing about a something that happened help you work through and process any negative or painful feelings attached to it? Yes. At least I hope so [laughs]. To be honest, I have wondered whether it is a cathartic process or if I am perpetuating some sadness or negative habits by singing about them all the time. Not to compare myself to Amy Winehouse, but when she passed I went back and looked at her songs more carefully and noticed that everything she wrote was, &quot;I&#39;m no good,&quot; &quot;I&#39;m a terrible person,&quot; &quot;I&#39;m a mess and an addict.&quot; And she ended up living out those words in a really dark way. It made me think about the way I write and I’m trying to be more mindful of what I&#39;m saying so I don’t perpetuate sadness and negativity [laughs]. But then What are your thoughts on social media again, sometimes that&#39;s just what wants to and indie artists? Do you find it helpful? come out. I&#39;m not all dark and gloomy. I can I think it is a curse and a blessing. It con- be funny and light and happy, too. nects you with your fans directly and that is so great because I think people stick around Do you think it is the intent that gives the longer and are more patient with you if you lyrics the power to perpetuate the negaengage them on sites like Twitter and Face- tive, instead of heal? With your feeling book. On the other hand, I feel like I can&#39;t that performing is more of an offering ever stop and that makes me feel crazy than a confession, the intent of a perfor[laughs]. I am a very private person and I mance would be more to share a kind of need breaks from it because I can get super universal truth with the audience than to overwhelmed. But then I feel guilty if I do say, “Hey, let me tell you about me.” But take a break, and I don&#39;t like that [laughs]. for someone caught in an addictive cycle, who is unable to get out the intent of their That brings up something I have always performance may very well be descripwondered about: Your music is so per- tive, as though to say: &quot;This is me. Right sonal and you put so much of yourself now, I’m a mess and I’m stuck.” And so into it – including some of your more maybe they do perpetuate the negative? painful experiences. When you perform Yes. Exactly. At least I hope so. [laughs] a song night after night, how do you protect yourself from repeatedly revisiting How would you describe your music the painful memories? style or genre to someone who is attendThat&#39;s a great question. I feel like writ- ing a show for the first time? ing is the place where I want to be the most This is a really hard question to answer. honest and vulnerable and put it all out I think my music is influenced by what I listhere. It&#39;s easy for me to be honest in the ten to and what I&#39;ve been listening to in the writing because for whatever reason, I&#39;m re- last two to five years is a lot of Elliot Smith, ally not afraid to put myself out there. And Emily Haines from Metric, and Gillian Welch. while performing — at least most of the time And on this record I was going for a kind of — I feel almost like something takes over marriage of those influences: a little bit of and it is out of my hands. Not to say that I&#39;m the electronic-y side of a band like Metric, detached, but more that it feels like the song along with some of the harmonic complexity is an offering to the audience rather than a of Elliot Smith, and the raw sounding vocals confessional thing. It’s like I&#39;m saying to the and storytelling of Gillian. Stylistically I don&#39;t audience: &quot;I&#39;m sharing this piece of me, but know what to call it. I&#39;ve been using alternanow it&#39;s kind of yours to do with it what you tive/indie/rock, but I feel like that isn&#39;t really want.&quot; It&#39;s not mine personally at that point. the best descriptor. I don&#39;t really know how There are nights where I might relate to to pinpoint my style [laughs]. what I&#39;m singing and think, &quot;Oh yeah, that hurt&quot; [laughs] or whatever. But honestly, it I actually hear that a lot [laughs]. I think mostly feels like the writing and the perform- that the indie, crowdfunding developments in the industry have brought ing are two totally separate things. a kind of freedom for artists to step really cool idea. The cons? I think it is really hard to do alone. I felt like I needed a team to not only think of cool incentives, but also to get them done, get them out, and to help with the videos. It is basically like you’re doing your own PR and media campaign and I fell ill equipped. I treated the campaign as a job in a way that I don&#39;t usually treat my music — just because I don&#39;t like thinking of music that way. But it was helpful to have deadlines, and to tell myself, &quot;Okay, these are the things I have to get done today.&quot; It made me feel like I was being proactive in getting this record out. Still most days I felt like, &quot;I need a manager; someone who has cool ideas outside of the music part of things because I can&#39;t think of anything outside the music part [laughs].&quot; I have a very one-track mind in that way.

outside the industry created boxes and not limit themselves to one rigidly defined style of music – definitions demanded by big recording labels that promote mass marketed, radio friendly, pop singles. It seems that indie artists just keeps adding hyphens or slashes [laughs]. The slashes! I know. I saw one of my favorite bands, Over the Rhine, describe their sound as “indie/art/folk/pop/rock/…” they had something like seven descriptors, with slashes [laughs]. And I thought it was great because I totally see it. They are all of those things! What is your favorite type of venue to play: Large capacity venues like you played on tour with Sara or smaller, more intimate venues? Well, we were playing venues with 2,000 - 7,000 seat capacity with Sara and when I&#39;m doing my thing, it&#39;s like anywhere from 20 - 200 capacity. But the ironic thing about music is that I get as much of a high playing Radio City Music Hall with Sara as I do playing a successful solo show to 50 people who want two encores — because yeah, that is a thrill. My dream career would be going around the country/world playing 200-300 seat theaters. If I could do that the rest of my life I would be so happy. At that size you get to keep the connection with the audience that you tend to lose with larger crowds. Bigger venues can get a little impersonal and I feel like I would really miss that. How do you relax? One of my favorite things to do is listen to podcasts. I also love to watch Top Chef and do yoga. I love to have a small get-together with friends; cook dinner, drink wine, sit, and laugh. What&#39;s next for you? What can your fans expect from you in the next year? Well the album, The Life, is being released in January. And we have a couple videos coming out to support the singles. And I&#39;m hoping to be going on tour with another artist in early 2015, but it hasn&#39;t been confirmed yet. I want to tour as an opener for another band to support The Life, rather than just go out on the road by myself. I&#39;ve done that before and it feels a little like spinning my wheels. Finally, what are your four favorite things – the four things you couldn’t (or just don’t want to) live without? Comedians. Musicians. Red wine. Lemons. 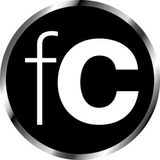