The journey of Hemant's Carnatic music ﬆudy with Nrityalaya Aeﬆhetics Society under the tutelage of Guru Arasakumari ﬆarted in 2006. He has accomplished a great deal in this span of time. This Arangetram will be the proof of his passion for music, his hard work and patience to underﬆand the complexity of the art, and present the art in front of the audience in a Carnatic concert ﬆyle. The Guru Shishya Bandham (bond) between Guru Arasakumari and Hemant is to be admired. Thanking Guru Arasakumari for motivating and inspiring Hemant and bringing out the beﬆ from Hemant. Congratulations to Hemant and I wish him the very beﬆ, and praying that all Gurus will shower him with their blessings. My heartfelt gratitude to his parents who have placed their truﬆ in Nrityalaya to take Hemant on this journey. This is a very special day to celebrate Hemant's achievement and I believe that he will continue learning music and performing. Humble Pranams to all the Gurus and you the audience. Aunty Santha Bhaskar Artiﬆic Director Bhaskars Arts Academy

Guru Arasakumari Nagaradjane, a compassionate and seasoned music educator has been a faculty member of Nrityalaya Aeﬆhetics Society since 2005. She pursued her training under Dr VS Balamurali and was awarded Maﬆers of Philosophy in Indian Music by the University of Madras, India. Guru Arasakumari is equipped with a broad range of skills and theoretical experience in the teaching and composing of Indian carnatic music. Being an energetic and eloquent singer herself, she has performed at All India Radio, won music competitions and performed at other music events since the age of 17. Blessed with a beautiful voice, her passion and intereﬆ in wanting to impart her knowledge of this divine art to others brought her to Nrityalaya Aeﬆhetics Society. Through Nrityalaya and its performing arm Bhaskar's Arts Academy, Guru Arasakumari had various opportunities to perform locally, conduct workshops, teach in numerous schools and perform overseas as well. Guru Arasakumari’s positivity and determination to bring out the beﬆ in her ﬆudents has been her key ﬆrengths. She teaches creatively, diﬀerentiating and adapting lessons according to her ﬆudents’ needs. To date, she has seen four of her ﬆudents through to their Arangetram in carnatic vocal. Apart from her growing liﬆ of ﬆaged performances, her skills in grooming talents have brought about a ﬆudent who was the ﬁrﬆ to be awarded the Nrityalaya's Diploma in Carnatic Vocal, a ﬆudent who won 1ﬆ prize in the national music singing competition and a ﬆudent who gained entry into the School of the Arts Singapore (SOTA) through carnatic vocal. She is also the conductor of Swathi Orcheﬆra which has performed both carnatic compositions and fusion at various venues including the Esplanade.

Guru’s Note Hemant Ramesh Nair’s journey in carnatic vocal began 13 years ago when he ﬁrﬆ arrived at Nrityalaya Aeﬆhetics Society. He is a jovial and unassuming ﬆudent who over the years has developed a deep bond and friendship with me while his learning and dedication took form under my tutelage. Hemant’s grasping power is remarkable. He has a diﬆinctive ﬆyle of learning and has often expressed his passion and underﬆanding of music concepts by creatively modifying parts of certain compositions. Needless to say, Hemant skillfully demonﬆrates an accurate underﬆanding of taalam and shruti of any compositions taught to him. He has no reservations when it comes to carnatic music. He sings boldly in his rich voice and practices diligently. Such gifts and talents can never be ignored and as such, I challenged Hemant over the years with longer compositions and solo performances during Sangita Ankuram, Navarathri performances and Thyagaraja Aradhana. Moﬆ of the compositions performed in this carnatic vocal arangetram has Hemant’s touch of individuality and creativity. I sincerely hope the audience will be enthralled by his performance today. Being Hemant’s ﬁrﬆ and only carnatic music teacher so far, I have had the opportunity to witness his sincerity and love. It is a blessing to be Hemant's guru for so many years. I have had the conﬆant support from his family members throughout these years and I cannot thank Hemant’s parents and grandparents enough. I am eternally grateful for the opportunity to be a part of Hemant’s journey in his pursuit of carnatic music. All the music compositions he is performing today are demanding compositions. My own Guru has praised Hemant’s ability to maﬆer such beautiful and challenging music pieces. May Hemant always have the blessings of God, his teachers, parents and loved ones. I wish him all the very beﬆ and hope he will continue to ignite the love of music amongﬆ his family, friends and the community.

Hemant Ramesh Nair Hemant has been learning Carnatic Music with his Guru Arasakumari Nagaradjane for the laﬆ 13 years. His intereﬆ for music was noticed from the age of two and he appreciating many genres of music has been part of his life since then. As Carnatic music links him to his roots, he ﬆarted learning it formally in Nrityalya Aeﬆhetic Society, a premier Indian Art Teaching Inﬆitution which eﬆablished more than 60 years ago in Singapore. Guru ArasaKumari Nagardjane has been inﬆrumental in increasing Hemant’s intereﬆ and enthusiasm in music. He has also been learning Mridangam for the laﬆ 6 years , initially from Kalamandalam Harikrishnan and currently with Guru Nelluvai Ragesh. Carnatic Sangeetham has become so much a part of Hemant’s life that he looks forward to learning more in his musical journey after his Arangetram.

TV Sajith Sajith, an expert violiniﬆ and vocaliﬆ, hails from an artiﬆic family in Kerala and has exhibited a passion for music from a young age. His music education began at the age of eight under the tutelage of N.K Gangadharan, Malabar Sukumaran Bhagavathar, R. Thyagarajan and B. Sasikumar. Sajith completed his M.A. in music at R.L.V College, Thirupunithura and has taught music in several inﬆitutions, including the

Kerala Sangeetha Nataka Academy. He has won several prizes in various youth feﬆivals in India and went on to be conferred the titles of “Ganabhushan” by the Palakkad Chembai Memorial Government Music College and “Ganapraveena” (Firﬆ Rank) by Swathi Thirunal Music College, Thiruvananthapuram. His music has been recognised abroad as well, having performed in countries such as the U.S, Thailand and China. He has also performed alongside notable musicians and personalities such as Padmasree Dr. K.J Yesudas, Sri Kaithapram Damodaran Namboothiri, Sri Neyyattinkara Vasudevan, Sri Kavalam Narayana Panicker, and Mohanlal. He was also accorded the “Sangitha Kala Nipuna” Award by Bhaskar’s Arts academy. Sajith joined the team at Nrityalaya in 2007 and has been teaching Violin and Carnatic vocal ever since.

Ragesh Nelluvai Ragesh is the lateﬆ addition to the musical ensemble of Nrityalaya. Ragesh ﬆarted his artiﬆic journey under the tutelage of his father, Raju Nelluvai. After which he continued his training under Sri Sanoj Poongad, a renowned Mridangam artiﬆ. Ragesh graduated from Kerala Kalamandalam, deemed to be University of Art and Culture by the Government of India, with an M.A. Mridangam. Prior to his M.A., Ragesh furthered his musical knowledge under Thrissur K. Jayakrishnan and Cherthala S. Dinesh. Ragesh has wowed audiences in multiple notable performances such as performing in Chembai Music Feﬆival in Guruvayur. Recognised as an “All India Radio” Graded Artiﬆ, Ragesh has provided Mridangam accompaniment for several Carnatic music concerts, dance programmes and Sampradaya Bhajans all across India. Ragesh also has a knack for composing melodious devotional songs, Varnams and Thillanas.

Gratitude Blessings from Almighty, my anceﬆors and all my Gurus for a smooth journey till this day and helping and guiding me. Guru Arasakumari for teaching me how to approach music, how to underﬆand it, how to internalize it and how to enjoy it. You have been more than a Guru to me. To Amma, Acha, Chetta, Ammoomma and Appoppas, for making me what I am today. This day would not have been possible without all of you. To Aunty Bhaskar, for creating a beautiful place to learn arts and get inspired by knowledgeable gurus who nurture the passion for ﬁne arts. Ragesh Sir and Sajith Sir, thank you for the wonderful and melodious accompaniment. Thank you Harikrishnan Sir, my ﬁrﬆ Mridangam Guru on teaching me the importance of Rhythm. Shobhana, for being today’s wonderful emcee. To Valsala Chechi, thank you for providing guidance throughout the whole process. Lijesh Photography for the amazing photos and videography that you will be doing tonight. Sequential AV Pte Ltd for creating a perfect audio experience today. Akhil, my buddy for your wonderful tips to perfect my songs. To all the music teachers of Nrityalaya Aeﬆhetics Society for your tips, love and support. To everyone who have helped to make the ﬆage and arrangements juﬆ perfect today! To my friends and family for being here today to support me. To you, the audience, for your presence and blessings. 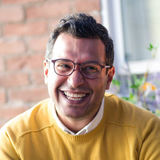