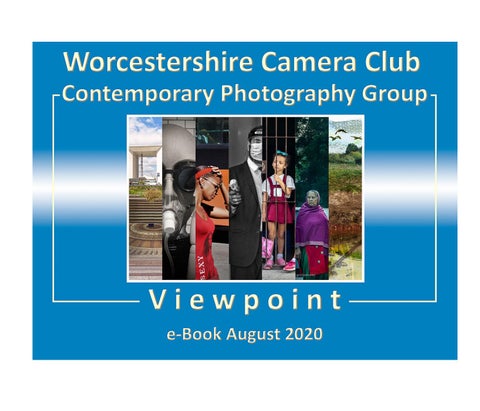 Candid street photography is a genre with which I am a little uncomfortable, but inspired by the work of club members such as Nigel Reader and Alex Isaacs, I decided to create a series of images of Cuban females to illustrate ageing in what is basically a third world country. Iâ&#x20AC;&#x2122;m showing these images in a sequence of ascending age of subject to illustrate how these women move from one phase of life to another in a country that has been governed by idealism into near poverty over the past 50 years.

Eric Williams 01 Let Me Out

From an Indian Train

'As dawn breaks, I’m looking out of a train window. We sweep across the Indian countryside and I glimpse people’s lives. We stop at stations where I catch moments frozen in time; but without context to help me interpret them, I am left with questions. Who is that woman? Where is she going? What are those people waiting for?’

Jenny Mann 01 From a window

JennyMann 06 Two ladies on a platform

JennyMann 07 Boy on a platform

Sense of the Organic (Ongoing Series)

A few more from this series including an awareness of the changing landscape as Winter changes to Spring and the renewal of life is becoming apparent.

This is an exploratory series of my emotional response to training as a nurse at this historical teaching hospital serving the East London community. There is a feeling of great pride but also my memories are also tinged with a sense of foreboding and anxiety as learnt my craft in this establishment. I have become part of the history of this hospital and it has made me the person I am. Two of my images (9 & 10) are work in progress as I blended my paintings with the decaying hospital giving a sense of the past, like a ghost inhabiting the wards that are crumbling before my eyes.

6_Maddy Pennock_Colour Returning to the Land

Have you ever thought how strange scale is? An object can look quite small when viewed from a distance, yet in reality it might be very large. We usually take it for granted as our brains have adjusted to it. A good example is the Grande Arche in Paris. Viewed from a distance it appears to be just an open box but as you approach it the box becomes enormous, all 30k tonnes of it. Built in 1985 -1989 to a design by Danish architect Johan Otto Speckelson & engineer Erik Reitzel, it is an office block. Despite its height the building forms an intimate enclosed square within the box with spectacular views down the Champs Elise to which it forms end block visually. It is not so friendly on a windy day!

The acquisition of a Photoshop Camera app for the phone gave me an opportunity to have a quick play with the theme of a changed world. We find ourselves currently in a very different reality, some of which feels as if we have slipped into a science fiction or dystopian universe. These were all deliberately taken from inside the house and this was an attempt to take images of very familiar, mundane and usually comforting surroundings, and convey the feeling of having twisted somehow through 90 degrees to confront something strangely different and often threatening. Things get out of proportion in lockdown; even shopping looms out of proportion as a task. It was also a bit of fun, which we very much need right now! Iâ&#x20AC;&#x2122;ve deliberately left them as from the app so maybe not technically perfect, but the app is worth a look!

Ruth Bourne 07 Where next

I use a converted second hand Fuji XT-10 & shoot in Black & White mode with minimal post processing. I'm fortunate to live a stone's throw from the wonderful Wyre Forest. If you keep away from the main paths (which can be fairly crowded) and follow the narrow side routes you can easily spend a couple of hours deep in the forest & not encounter a single other person. I particularly like the thick deciduous wooded area that surrounds the Rocket Testing Research Station which the Government has until very recently stopped all maps from showing its location. This is somewhat surprising as all locals know where it is, due to the very large bangs and whooshing sounds that occasionally emanate from deep within the forest. Summer is a great time for using an IR camera - the dappled light produced by bright sunlight penetrating into thick, leafy, woodland is truly magical. I hope you can appreciate my love of the local woodlands from my images.

The comfort of a known effect, or a previously explored topic or an easily seen image. My walk along the canal was exactly this, I was seeking comfort and predictability. Like Vivian Maier, I was not searching for an image to please others, or to exhibit. It was to be quietly of the moment, for its own sake. Now on review I can recall the peaceful feelings of a lack of challenge, with no decisions to make. Simple pleasures . All very necessary for me at the moment. As they say ''Dance like no-one is watching''. I suggest ''Take pictures like no-body will see them''.

These few images are really just an expression of frustration, anger and disappointment.

Stewart Bourne 02 Sitting in my study

Stewart Bourne 07 Sitting in my study

Worcester and Tibberton in Monochrome

During the lockdown, my favourite places for my daily walks are along the Diglis Waterside in Worcester and along the canal in Tibberton. The Cathedral in Worcester, the Waterside combines modern living with some of the timeless original buildings in the heart of Royal Worcester, the Diglis Basin Marina, the River Severn, the Diglis locks, the Boathouses, the nature, the panoramic views of the marina are blended together beautifully and in harmony. It is my intention to capture this as much as possible. The following images were taken on a bright sunny day and are presented in Monochrome.

Humans are naturally curious. This innate sense is not only how we advance but also how we get into trouble! As photographers we reveal our fascination with ‘the curious’ through pictures and as ‘social animals’ we share this intrigue with others. Here’s a set of largely non-related images which aroused my curiosity. In a church porch I found a small poster deftly changed by one word to reflect the time we live in. Scratched upon the sea wall at Sea Palling were numerous ‘lines’ as if written as punishment for misbehaviour. A set of small monkeys and a window crammed full with teddy bears causes us to wonder about the people and children who once owned them. Similarly, a once treasured doll is for sale whilst an old framed picture with a label attached asks, somewhat tongue in cheek, ‘can you identify this delectable Gt. Witchinghay resident?’ Amidst a library of gilded tomes, a stuffed bird remains forever perched within a glass dome. A double-exposure creates surreal perspectives for the ‘mirror room’. The set concludes with the enigma of words hastily scribed upon whitewashed windows, a mysterious street sign and the ‘eviction’ of a large furry toy. We wonder why?

Impressions of Light and Shade

Once our garden was all shiny and new, but time has not been kind and decay has set in - the deck is crumbling, weeds have taken over, the lawn is no longer lush. So I avoid the overall picture and focus on the details; the flowers that come back year after year, thriving from neglect and a few favourites that receive unfair attention. Although splashes of colour are welcome, it’s the light that catches my eye. The morning sun beams through the leaves of the Crocosmia, glinting off dew drops clinging to its flowers. Shadows at midday form silhouettes of ‘Katrina Thompsen’ while the variegated Athyrium lurks in the shadows. Finding these little impressions of light and shade brings delight to a less than perfect garden.

Another day – Another Churchyard

Not quite so wild as the last one but I did have my infrared camera with me! I hadn’t realised until I read it in a newspaper that churches have been encouraged to let some areas go ‘natural’ - I think this one could be described as a ‘tamed wild’! I did take some shots in colour but they seemed too sharp and lacked atmosphere. The IR processing gave the place an ‘other worldly’ feeling which was much more interesting. The church was built in Victorian times so the area surounding it contains the oldest memorials, but over the railings you can look into the vast area of the later and much tidier cemetry – even cutting the grass with a ride-on mower!

Blue and Yellow The Blue of the Sky and the Yellow of the Sun. A popular combination of primary colours. A decisive moment, Followed by several juxtapositions.

On the 4th of July 2020 the Pubs and restaurants were brought back to life as a milestone in reopening. I put on my mask and headed to London. I saw the adaptations to try to make the environment Covid safe in the streets and the Underground and although compliance was generally good it was not universal.

Many miles of railway track were abandoned in the years following the Beeching Report. In most cases the track was taken up and there is now no sign that a railway was ever there. In a few cases like this line in Staffordshire the track remains for at least for part of the way. The track rusts, weeds proliferate, bushes and trees grow amongst what is left of the line and the wooden sleepers rot. Silently they sleep, ever hopeful that one day the line may be re-opened.

This is a set of images that sum up Cuba for me. They were taken four years ago but only chosen from my files a few days ago. They havenâ&#x20AC;&#x2122;t been seen before and arenâ&#x20AC;&#x2122;t necessarily the ones I would have chosen at the time of taking for a set about Cuba. However, I feel that these are more representative of how I feel now. A monthly publication by members of the Contemporary Photography Group of the Worcestershire Camera Club, UK.

A monthly publication by members of the Contemporary Photography Group of the Worcestershire Camera Club, UK.