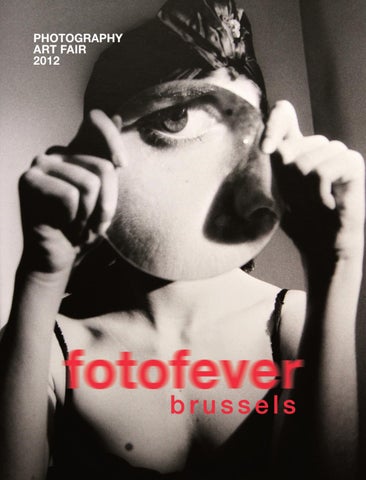 www.fotofeverartfair.com www.christophruys.be Publisher - Christoph Ruys 360° Agency Design - Arne Wittevrongel / Eastvillage.be Printing - Deckers Snoeck Antwerp Copyright © 2012 © photos / the artists © texts / the authors Brussels, 2012 All rights reserved. No part of this publication may be reproduced or transmitted, in any form or by any means, electronic or mechanical, including photocopy, recording, or any other information storage and retrieval system, without prior permission in writing from the publisher.

For the second edition of fotofever, 261 artists from 38 countries are exhibited, great masters from the 20th century such as William Klein, Irving Penn, Alex Webb and Saul Leiter, with up-and-coming talented artists. Among them, some of our favorites that we wish to share with you, such as the Russian artists Vadim Gushchin, Oleg Dou and Natia Kartvelishvili, Belgian photographers Justine Collomb, Katrien Vermeire, French Aurore Valade, Cécile Decorniquet, Virginie Maillard, Oliver Valsecchi, Dutch Mischa Keijser, Marie-Cecile Thijs, Ellen Kooi, Polish Anna Orlowska and Łukasz Trzciñski…

For fotofever, all categories are represented : portrait, nude, landscape – country and city –, installation, construction, colored photography, black & white photography, surprising and mesmerizing videos… So, let your heart guide you in our fair and treat yourself by buying a work of art that moves you!

Each gallery exhibiting is delighted to meet with you and share their passion for photography.

This catalogue proves how all these artists have explored the medium photography itself, accepted and explored new technologies in photography, broken almost all formal taboos and explored almost all varieties of content. These photographers are all capable of making a thrilling, creative, masterful employment of the elements of the language of photography we have developed the last fifty years. In some ways, we’re in the strongest position we’ve ever been. We have all techniques at our disposal and our visuel language is at its most highly developed. We are liberated from boundaries and limiting notions of form, we have gone through questioning the medium itself. We are free of the pressure of living with an avantgarde – we no longer have to stick to a style of working to be considered 'current'. We can move beyond the search for new ground via technology. Everything – from 35mm photographs of our cats to large-format industrial landscapes to square medium-format deadpan portraits – is equally full of potential for being combined eloquently into a fresh vision that we can term progress, depending on the hands its in. We are at the moment for photography to be able to speak as eloquently and as richly as at any point in its history. Finally, the only limits are ourselves and our imagination. What a great time for photography. www.christophruys.be/Thanks to Tom Griggs @ Fototazo

Welcome to the passionate world of fotofever!

Stemming from meeting at fotofever Paris one year ago, Belgian collector known as Galila has accepted Cécile Schall’s invitation to showcase a part of her immense collection on the theme of the eye for fotofever brussels edition. The exhibition "for Galila's eyes only" unveils 30 photographic works from Galila's private collection, carefully curated by Eyemazing Susan, the founder of Eyemazing Editions.

established artists like Irving Penn and Douglas Gordon as well as young artists uncovered by Galila, such as Sawada Tomoko from Japan and Anne Nordquist Andersson from Sweden, the exhibition reflects the richness and coherence of an intriguing and enigmatic collection and the focus of a passionate collector.

Each year, fotofever welcomes a private collection and undertakes the challenge of developing new vocations for collectors!

“FOR GALILA’S EYES ONLY”, THE EXHIBITION OF GALILA’S PRIVATE COLLECTION CURATED BY EYEMAZING SUSAN, FOUNDER OF EYEMAZING EDITIONS.

In this black and white forest of glances, the expression "the eyes are the windows to the soul" is visible in all of its senses: the visitor, both observing and the observed, is undressed by the penetrating, inquisitive or dreamy looks.

Active since 2005, Galila has amassed a tremendous number of artworks by largely emerging artists, whose temperaments have a distinctly surreal edge. The exhibition not only illustrates the human soul and psyche through images which incorporate eyes into their compositions, but also reveals the talents of several highly original, contemporary artists whose works are rich with fantasy elements and mind travelling. Through an eclectic selection of Marc Le Mené, Portrait de femme avec loupe, 1987, COLLECTION GALILA

The fotoprize is an annual prize organized by fotofever. The fotoprize’s aim is to help a very young talented artist make his first steps in the photography market by presenting his work in the context of an international photography art fair and an international photography festival. The winner of the fotoprize receives a soloshow during fotofever, a special off-site exhibition, a portfolio in a photography magazine and his works produced by a fotofever partner. For its first edition, the jury of the fotoprize is composed of Basia Embiricos (gallery owner, founder of the Photo District Marais I Paris), Sophie Gamand (chief editor Azart photographie), Nathalie Herschdorfer (curator of "regeneration, tomorrow's photographers today" organized by the Musée de l'Elysée I Switzerland), Michal Janica (production partner I Lablab) and Elviera Velghe (director of FoMu I FotoMuseum I Antwerp). Selected among the 57 applications coming from 30 European art schools, young Polish Anna Orlowska has been awarded the fotoprize. Born in 1986, Anna studied in Poland and Czech republic. She graduated in 2011 from the Polish national

film school - department of photography. The photographer is distinguishable by her somber and oppressive scenes that ask the viewer to be vigilant and keep an open spirit as shown throughout her series The Day Before, Private Maps, and the most recent Leakage. The jury highlights the impressive maturity of her work and the perspective it offers for her future career. Her exhibitions are produced by Lablab.

You can find Anna's works in November during the Month of Photography in Paris, at the parcoursexhibition, which will be devoted to her work in four galleries in the Photo District Marais as well as starting now in AZART and Artribune magazines.

ANNA ORLOWSKA, WINNER OF THE FOTOPRIZE

In addition to our exhibitors and their talented artists included in this catalog, we would like to thank