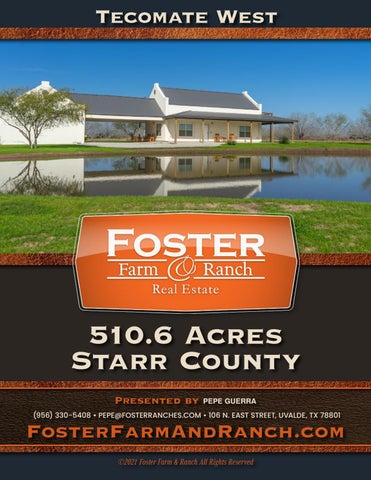 Foster Farm &amp; Ranch 510.6 ACRES • STARR COUNTY • $2,029,635 DESCRIPTION The Tecomate West Ranch lies within the “South Texas Brush Country”. This specific area is characterized by ranchland consisting mostly of native vegetation. Native vegetation consists of a moderate to the dense growth of small trees, shrubs, weeds, short grasses, and coarse bunch grasses common to sub-humid and semi-arid regions of the Southwestern United States and Northern Mexico. The predominant woody plant is mesquite, which occurs over most of the region in widely scattered to very thick growth. Various thorny shrubs of many species and prickly pear are present throughout the region. Creek beds and tributaries are typically characterized by a heavy growth of mesquite, hackberry, elm, live oak, pecan, or other trees. Weeds and forbs are present in great variety and grow profusely where soil moisture is adequate. ln addition to cattle ranching the “brush country” is sought after for recreational hunting. This area is known to produce the largest whitetail deer in the state as well as excellent hunting of blue and bob-white quail, javelinas, turkey, and wild hogs with some hunting of mountain lions and bobcats. Leases on quality hunting properties are generally in steady demand and often generate more income for landowners than does a typical cattle grazing lease.

implemented and followed over the last 14 years. The subject is fenced along the entire perimeter with King Ranch Deer net wire. In addition, there is a 30+ acre fenced food plot. The Tecomate West Ranch has electricity provided by Medina Electric Cooperative. City water is provided by El Sauz Water District via a 2-inch water meter located along highway 649.

WATER Water for livestock and wildlife is provided by 4 earthen water ponds varying in size from .25 to .5 acres as well as city water provided by a two-inch water meter from El Sauz Water Supply. A freshwater well is located near the house site and is used to fill the various wildlife waterers and ponds on the ranch.

The Tecomate West Ranch is becoming one of the top hunting ranches of its size in Texas. Over the past 11 years, the ranch has been developed as a prime upland bird and whitetail deer hunting property. The Tecomate West Ranch shares the famous Tecomate genetics and employs many advances in raising trophy deer such as Lab-Lab food plots, the reversible game fencing of the summer food plots. The ranch is under one of the best game management programs in America. Dressed weights of Tecomate Bucks often exceed 200 lbs which are far in excess

Over the past 11 years, various improvements have been

of typical Trophy Deer. The Tecomate West Ranch has a reported

buck to doe ratio of 1.3 to 1 and a population of approximately 1

In addition to deer, the Tecomate West Ranch provides

at the house site, a firepit with social areas and landscaping that

includes the establishment of prickly pear. A very selective deer breeding program and forage research program have been

Chad Foster is a native of Eagle Pass. For the past decade, Foster has managed family-owned businesses with a focus on real estate and real estate development as well as investments in agriculture and oil &amp; gas. Foster became a licensed real estate agent in 2004 after graduating Texas A&amp;M University in 2003 with a degree in Buisness. He became a licensed real estate broker in 2004. He and his wife Jill currently reside in Jill’s hometown of Uvalde with their son Tres. Foster’s life-long dedication to his community corresponds to the support of many civic and social organizations with ties to Southwest Texas.

A true Texas Native, Pepe graduated from Texas A&amp;M University in 1983 and immediately pursued a career as a South Texas rancher. In 1988, he began a successful career in ranch and commercial real estate. Pepe accredits his expertise as a ranch realtor to his extensive network of longtime associates, knowledge of the land, and first-hand experience in cattle ranching at all levels from Laredo to Corpus Christi and everything South.

“We Build Relationships on Solid Ground”

Chad Foster, owner of Foster Farm & Ranch, along with his team, presents to you another outstanding ranch, investment, or recreational property now for sale in Texas. Sold • 510.6 Acres • Starr County • $2,029,635 Chad Foster, Owner of Foster Farm & Ranch, leads a team of agents with over 90 years of experience buying and selling ranch, investment, and recreational properties in Texas. Foster Farm & Ranch’s process of cultivating legacies by bringing time-honored values to the table in every real estate transaction has earned a statewide reputation personifying trust, dedication, and success. From land sales and acquisitions, water and mineral rights, title transfer, and more, you can rely on Foster Farm & Ranch to facilitate every step towards your goal of buying or selling your piece of Texas. •NOW LICENSED IN NEW MEXICO• 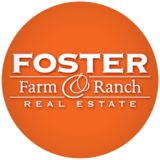