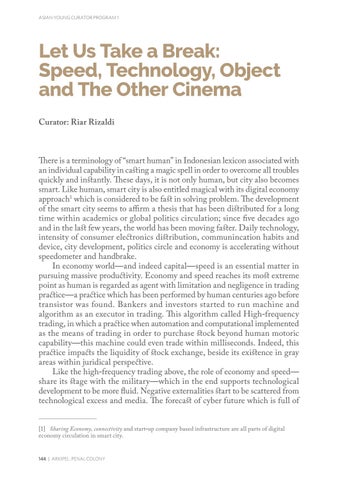 Let Us Take a Break: Speed, Technology, Object and The Other Cinema Curator: Riar Rizaldi

There is a terminology of “smart human” in Indonesian lexicon associated with an individual capability in casting a magic spell in order to overcome all troubles quickly and instantly. These days, it is not only human, but city also becomes smart. Like human, smart city is also entitled magical with its digital economy approach1 which is considered to be fast in solving problem. The development of the smart city seems to affirm a thesis that has been distributed for a long time within academics or global politics circulation; since five decades ago and in the last few years, the world has been moving faster. Daily technology, intensity of consumer electronics distribution, communincation habits and device, city development, politics circle and economy is accelerating without speedometer and handbrake. In economy world—and indeed capital—speed is an essential matter in pursuing massive productivity. Economy and speed reaches its most extreme point as human is regarded as agent with limitation and negligence in trading practice—a practice which has been performed by human centuries ago before transistor was found. Bankers and investors started to run machine and algorithm as an executor in trading. This algorithm called High-frequency trading, in which a practice when automation and computational implemented as the means of trading in order to purchase stock beyond human motoric capability—this machine could even trade within milliseconds. Indeed, this practice impacts the liquidity of stock exchange, beside its existence in gray areas within juridical perspective. Like the high-frequency trading above, the role of economy and speed— share its stage with the military—which in the end supports technological development to be more fluid. Negative externalities start to be scattered from technological excess and media. The forecast of cyber future which is full of [1]  Sharing Economy, connectivity and start-up company based infrastructure are all parts of digital economy circulation in smart city. 144  |  ARKIPEL: PENAL COLONY 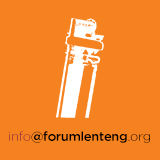