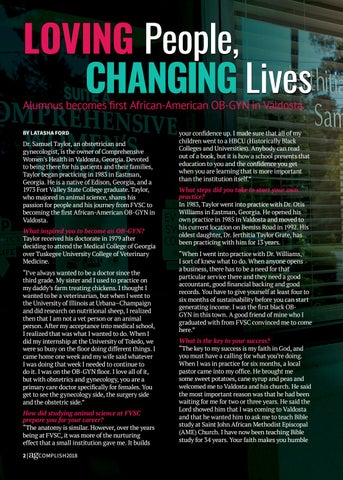 Dr. Samuel Taylor, an obstetrician and gynecologist, is the owner of Comprehensive Women’s Health in Valdosta, Georgia. Devoted to being there for his patients and their families, Taylor began practicing in 1983 in Eastman, Georgia. He is a native of Edison, Georgia, and a 1973 Fort Valley State College graduate. Taylor, who majored in animal science, shares his passion for people and his journey from FVSC to becoming the first African-American OB-GYN in Valdosta. What inspired you to become an OB-GYN? Taylor received his doctorate in 1979 after deciding to attend the Medical College of Georgia over Tuskegee University College of Veterinary Medicine. “I’ve always wanted to be a doctor since the third grade. My sister and I used to practice on my daddy’s farm treating chickens. I thought I wanted to be a veterinarian, but when I went to the University of Illinois at Urbana–Champaign and did research on nutritional sheep, I realized then that I am not a vet person or an animal person. After my acceptance into medical school, I realized that was what I wanted to do. When I did my internship at the University of Toledo, we were so busy on the floor doing different things. I came home one week and my wife said whatever I was doing that week I needed to continue to do it. I was on the OB-GYN floor. I love all of it, but with obstetrics and gynecology, you are a primary care doctor specifically for females. You get to see the gynecology side, the surgery side and the obstetric side.” How did studying animal science at FVSC prepare you for your career? “The anatomy is similar. However, over the years being at FVSC, it was more of the nurturing effect that a small institution gave me. It builds 2|

your confidence up. I made sure that all of my children went to a HBCU (Historically Black Colleges and Universities). Anybody can read out of a book, but it is how a school presents that education to you and the confidence you get when you are learning that is more important than the institution itself.” What steps did you take to start your own practice? In 1983, Taylor went into practice with Dr. Otis Williams in Eastman, Georgia. He opened his own practice in 1985 in Valdosta and moved to his current location on Bemiss Road in 1992. His oldest daughter, Dr. Jerthitia Taylor Grate, has been practicing with him for 13 years. “When I went into practice with Dr. Williams, I sort of knew what to do. When anyone opens a business, there has to be a need for that particular service there and they need a good accountant, good financial backing and good records. You have to give yourself at least four to six months of sustainability before you can start generating income. I was the first black OBGYN in this town. A good friend of mine who I graduated with from FVSC convinced me to come here.” What is the key to your success? “The key to my success is my faith in God, and you must have a calling for what you’re doing. When I was in practice for six months, a local pastor came into my office. He brought me some sweet potatoes, cane syrup and peas and welcomed me to Valdosta and his church. He said the most important reason was that he had been waiting for me for two or three years. He said the Lord showed him that I was coming to Valdosta and that he wanted him to ask me to teach Bible study at Saint John African Methodist Episcopal (AME) Church. I have now been teaching Bible study for 34 years. Your faith makes you humble

The AGcomplish magazine is published by the Fort Valley State University College of Agriculture, Family Sciences and Technology. Information published herein is for educational purposes in the furtherance of the University’s Land-Grant mission in cooperation with the U.S. Department of Agriculture. Materials contained in this publication may be reprinted for further educational use provided the meaning is not altered and proper credit is given to the College of Agriculture, Family Sciences and Technology at Fort Valley State University.