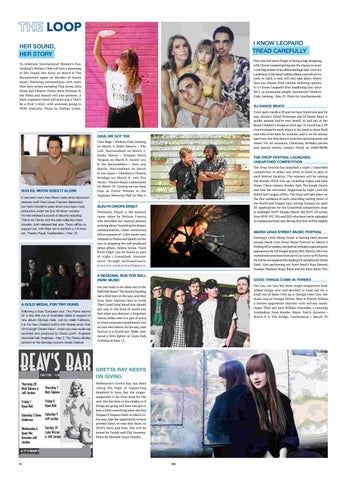 HER SOUND, HER STORY

Now you will never forget to bring a bag shopping, with I Know Leopard giving you the chance to score a tote bag as part of an album package deal. Love is a Landmine is the band’s debut album and will arrive early in April. A tour will also take place, where fans can choose from various ticketing options. It is I Know Leopard’s first headlining tour since 2015, so accessorise people. Accessorise! Workers Club, Geelong - May 23. Photo by Lisa Businovski.

To celebrate International Women’s Day, Geelong’s Workers Club will host a screening of Her Sound, Her Story on March 8. The documentary spans six decades of Aussie music, featuring conversations with more than forty artists including Tina Arena, Julia Stone and Eleanor Dixon. Rach Brennan & the Pines and Hassall will also perform. A more expensive ticket will score you a ‘Don’t Be a Dick’ t-shirt, with proceeds going to NOW Australia. Photo by Nathan Green.

DJ DANCE BEATS Every party needs a DJ and we have found one just for you. Altona’s David Stoneman aka DJ Dance Beats is unlike anyone you’ve ever heard! In and out of the Royal Children’s Hospital until age 18, David has a VP (ventriculoperitoneal) shunt in his head to drain fluid and rods in his back for scoliosis, and is on the autism spectrum, but that doesn’t stop him spinning some rad tunes! For all occasions, Christmas, birthday parties and special events, contact David on 0400190096

SUN KIL MOON GOES IT ALONE It has been more than fifteen years since slowcore/ sadcore outfit Red House Painters disbanded, but Mark Kozelek’s years since have been most productive under the Sun Kil Moon moniker. He has released a bunch of albums including This is My Dinner and the solo collection Mark Kozelek, both released last year. There will be no support act, with Mark set to perform a 2.5-hour set. Theatre Royal, Castlemaine – May 18.

THE DROP FESTIVAL LAUNCHES UNEARTHED COMPETITION The Drop Festival has launched a triple j Unearthed competition to select any artist or band to play at each festival location. The winners will be joining the already HUGE line up, including Angus and Julia Stone, Client Liaison, Hockey Dad, The Jungle Giants and Alex the Astronaut. Supported by triple j and the World Surf League (WSL), The Drop will take place on the first weekend of each coinciding surfing event of the World Surf League tour, hitting Torquay on April 20. Applications for the Unearthed competition close at midnight AEDT Sunday March 3rd 2019. All artists from NSW, VIC, WA and QLD who have tracks uploaded to triplejunearthed.com during this time will be eligible.

SLEUTH DROPS DEBUT Portland’s Sleuth is the musical name taken by Melissa Francis, who describes her musical journey as being about “searching for deeper communication, closer connection, better expression”. A few tracks were released to iTunes and Spotify on the way to dropping her self-produced debut album, Umbra Anima. Track ‘Knife Edge’ can be heard as part of triple j Unearthed. Discover more through melissajfrancis. wixsite.com/sleuthmusic.

A GOLD MEDAL FOR TINY RUINS Following a busy European tour, Tiny Ruins returns for a nice little run of Australian dates in support of new album Olympic Girls. Led by Hollie Fullbrook, it is the New Zealand outfit’s first release since their 2016 single ‘Dream Wave’, which you may recall was recorded and produced by David Lynch. Anglesea Memorial Hall, Anglesea – May 3. Tiny Ruins will also perform at the Bendigo Autumn Music Festival.

GOOD THINGS COME IN THREES Not one, not two, but three singer-songwriters have talked things over and decided to head out for a small run of dates. First up is Georgia State Line, the music soul of Georgia Delves. Next is Patrick Wilson, a former apprentice butcher with serious music chops. Then you have William Alexander, a crooning troubadour from Bourke. Major Tom’s, Kyneton – March 8 & The Bridge, Castlemaine – March 10.

Are you ready to be taken out to the Ball Park Music? The band is heading out a little later in the year, and they have their regional fans in mind. Their Good Good Mood tour should put you in the kind of mood you feel when you discover a forgotten twenty dollar note in a pair of jeans, or when someone compliments you on your new haircut. By the way, your haircut is a knock-out. Make your mood a little lighter at Costa Hall, Geelong on June 15.

Melbourne’s Gretta Ray has been riding the high of supporting Mumford & Sons, but the singersongwriter is far from done for the year. She has been in the studio, so if things are going well fans may get to hear a little something when she hits Torquay’s Torquay Hotel on March 22. For now, take the opportunity to have another listen, or your first listen, to 2018’s Here and Now. She will be joined by Feelds and Ella Sweeney. Photo by Michelle Grace Hunder. 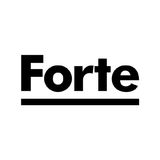