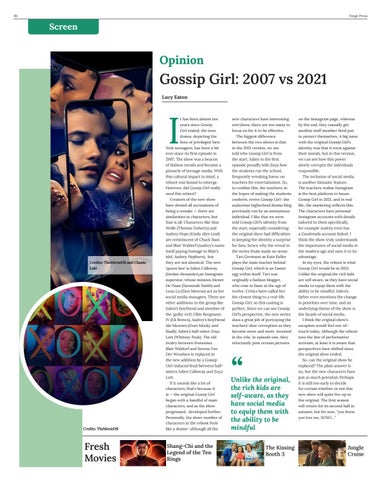 t has been almost ten years since Gossip Girl ended; the teen drama, depicting the lives of privileged New York teenagers, has been a hit ever since its first episode in 2007. The show was a beacon of fashion trends and became a pinnacle of teenage media. With this cultural impact in mind, a reboot was bound to emerge. However, did Gossip Girl really need this reboot? Creators of the new show have denied all accusations of being a remake — there are similarities in characters, but that is all. Characters like Max Wolfe (Thomas Doherty) and Audrey Hope (Emily Alyn Lind) are reminiscent of Chuck Bass and Blair Waldorf (Audrey’s name itself paying homage to Blair’s idol, Audrey Hepburn), but they are not identical. The new ‘queen bee’ is Julien Calloway (Jordan Alexander),an Instagram superstar, whose minions Monet De Haan (Savannah Smith) and Luna La (Zion Moreno) act as her social media managers. There are other additions to the group like Julien’s boyfriend and member of the ‘guilty rich’, Obie Bergmann IV (Eli Brown), Audrey’s boyfriend Aki Menzies (Evan Mock), and finally, Julien’s half-sister Zoya Lott (Whitney Peak). The old rivalry between frenemies Blair Waldorf and Serena Van Der Woodsen is replaced in the new addition by a Gossip Girl-induced feud between halfsisters Julien Calloway and Zoya Lott. If it sounds like a lot of characters, that’s because it is — the original Gossip Girl began with a handful of main characters, and as the show progressed, developed further. Personally, the sheer number of characters in the reboot feels like a shame- although all the

Shang-Chi and the Legend of the Ten Rings

new characters have interesting storylines, there are too many to focus on for it to be effective. The biggest difference between the two shows is that in the 2021 version, we are told who Gossip Girl is from the start. Julien in the first episode proudly tells Zoya how the students run the school, frequently wreaking havoc on teachers for entertainment. So, to combat this, the teachers, in the hopes of making the students conform, revive Gossip Girl- the audacious highschool drama blog previously run by an anonymous individual. I like that we were told Gossip Girl’s identity from the start, especially considering the original show had difficulties in keeping the identity a surprise for fans, hence why the reveal in the series finale made no sense. Tavi Gevinson as Kate Keller plays the main teacher behind Gossip Girl, which is an Easter egg within itself. Tavi was originally a fashion blogger, who rose to fame at the age of twelve. Critics have called her the closest thing to a real-life Gossip Girl, so this casting is perfect. Since we can see Gossip Girl’s perspective, the new series does a great job of portraying the teachers’ slow corruption as they become more and more invested in the role. In episode one, they reluctantly post certain pictures

Unlike the original, the rich kids are self-aware, as they have social media to equip them with the ability to be mindful The Kissing Booth 3

on the Instagram page, whereas by the end, they casually get another staff member fired just to protect themselves. A big issue with the original Gossip Girl’s identity was that it went against their morals, but in this version, we can see how this power slowly corrupts the individuals responsible. The inclusion of social media is another fantastic feature. The teachers realise Instagram is the best platform to house Gossip Girl in 2021, and in real life, the marketing reflects this. The characters have personal Instagram accounts with details tailored to them specifically, for example Audrey even has a Goodreads account linked. I think the show truly understands the importance of social media in the modern age and uses it to its advantage. In my eyes, the reboot is what Gossip Girl would be in 2021. Unlike the original,the rich kids are self aware, as they have social media to equip them with the ability to be mindful. Julien’s father even mentions the change in priorities over time, and an underlying theme of the show is the facade of social media. I think the original show’s escapism would feel out-oftouch today. Although the reboot toes the line of performative activism, at least it is aware that perspectives have shifted since the original show ended. So, can the original show be replaced? The plain answer is no, but the new characters have just as much potential. Perhaps it is still too early to decide for certain whether or not this new show will quite live up to the original. The first season will return for its second half in autumn, but for now, “you know you love me, XOXO…”

The first issue produced by the 2021/22 Editorial Committee at Forge Press. A first attempt by many members of the new committee at creating a paper. Enjoy articles in our Features, Lifestyle and Music sections and keep up to date with the news and sport at the front and back respectively. Also, keep an eye out for our Freshers Issue in a weeks time, available on Issuu and in physical print around the University of Sheffield, for the first time since the 2019/20 academic year! 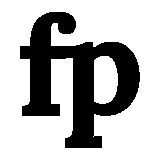