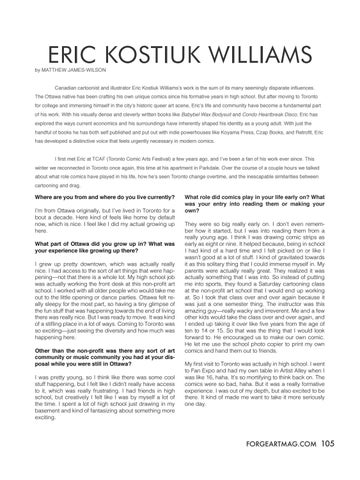 Canadian cartoonist and illustrator Eric Kostiuk Williams’s work is the sum of its many seemingly disparate influences.

The Ottawa native has been crafting his own unique comics since his formative years in high school. But after moving to Toronto for college and immersing himself in the city’s historic queer art scene, Eric’s life and community have become a fundamental part of his work. With his visually dense and cleverly written books like Babybel Wax Bodysuit and Condo Heartbreak Disco, Eric has explored the ways current economics and his surroundings have inherently shaped his identity as a young adult. With just the handful of books he has both self published and put out with indie powerhouses like Koyama Press, Czap Books, and Retrofit, Eric has developed a distinctive voice that feels urgently necessary in modern comics.

I first met Eric at TCAF (Toronto Comic Arts Festival) a few years ago, and I’ve been a fan of his work ever since. This

winter we reconnected in Toronto once again, this time at his apartment in Parkdale. Over the course of a couple hours we talked about what role comics have played in his life, how he’s seen Toronto change overtime, and the inescapable similarities between cartooning and drag.

Where are you from and where do you live currently? I’m from Ottawa originally, but I’ve lived in Toronto for a bout a decade. Here kind of feels like home by default now, which is nice. I feel like I did my actual growing up here. What part of Ottawa did you grow up in? What was your experience like growing up there? I grew up pretty downtown, which was actually really nice. I had access to the sort of art things that were happening—not that there is a whole lot. My high school job was actually working the front desk at this non-profit art school. I worked with all older people who would take me out to the little opening or dance parties. Ottawa felt really sleepy for the most part, so having a tiny glimpse of the fun stuff that was happening towards the end of living there was really nice. But I was ready to move. It was kind of a stifling place in a lot of ways. Coming to Toronto was so exciting—just seeing the diversity and how much was happening here. Other than the non-profit was there any sort of art community or music community you had at your disposal while you were still in Ottawa? I was pretty young, so I think like there was some cool stuff happening, but I felt like I didn’t really have access to it, which was really frustrating. I had friends in high school, but creatively I felt like I was by myself a lot of the time. I spent a lot of high school just drawing in my basement and kind of fantasizing about something more exciting.

What role did comics play in your life early on? What was your entry into reading them or making your own? They were so big really early on. I don’t even remember how it started, but I was into reading them from a really young age. I think I was drawing comic strips as early as eight or nine. It helped because, being in school I had kind of a hard time and I felt picked on or like I wasn’t good at a lot of stuff. I kind of gravitated towards it as this solitary thing that I could immerse myself in. My parents were actually really great. They realized it was actually something that I was into. So instead of putting me into sports, they found a Saturday cartooning class at the non-profit art school that I would end up working at. So I took that class over and over again because it was just a one semester thing. The instructor was this amazing guy—really wacky and irreverent. Me and a few other kids would take the class over and over again, and I ended up taking it over like five years from the age of ten to 14 or 15. So that was the thing that I would look forward to. He encouraged us to make our own comic. He let me use the school photo copier to print my own comics and hand them out to friends. My first visit to Toronto was actually in high school. I went to Fan Expo and had my own table in Artist Alley when I was like 16, haha. It’s so mortifying to think back on. The comics were so bad, haha. But it was a really formative experience. I was out of my depth, but also excited to be there. It kind of made me want to take it more seriously one day. 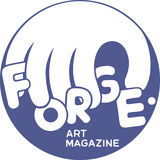