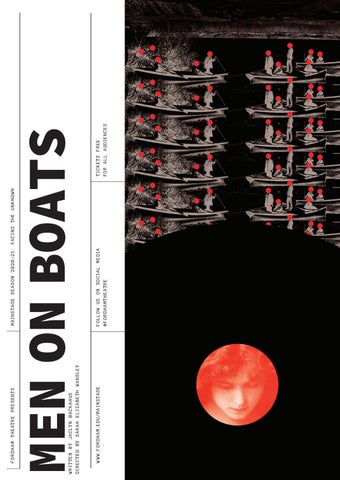 TICKETS FREE FOR ALL AUDIENCES

ABOUT THE FORDHAM THEATRE PROGRAM

The Fordham University Theatre Program is highly regarded as one of the most outstanding BA theatre training programs in the country. The program combines the intimacy of a small conservatory with an exceptional liberal arts education, and the rich resources and opportunities available in the world capital of the performing arts.

The 2020-21 Mainstage Season was born out of a year-long collaborative process with our students during monthly meetings filled with lively discussions and thoughtful commentary on who we are as a Program and a people. We look forward to â&amp;#x20AC;&amp;#x153;Facing the Unknownâ&amp;#x20AC;? together in our continued fight for racial justice and equality, all while being good stewards of the work, our city, and our world. As we continue to engage our ever-changing world and field, we could not be more excited to share these stories of reckoning and transformation with our audiences.

Fordham Theatre produces four mainstage productions each season, and sixteen to eighteen studio theatre productions. The mainstage productions are directed and designed by full-time faculty and guests from the professional New York theatre community. The studio productions are comprised of playwriting and directing projects that are completely student-driven, with the support of outside professional directors (playwriting) and mentors (directing). Additionally, each spring, we feature our senior designers and stage managers in a Design Show, and our senior actors in a Performance Showcase.

M AINSTAGE I: MEN ON BOATS

“A TRIBUTE TO BEING FEARLESS PIONEERS, MEN ON BOATS IS A TESTAMENT TO OUR NEW NORMAL WITH A RESILIENT DIRECTOR, CAST, AND CREW AT THE HELM OF A JOURNEY NOTHING SHORT OF MIRACULOUS.”

Last March, the 2020-21 Mainstage Season was finalized. Then, the COVID-19 pandemic hit, causing uncertainty for an entire medium of storytelling. Despite social distancing practices preventing a season of traditional mainstage productions, Managing Director Stefanie Bubnis noted the resilience of Fordham Theatre artists as a call to face the challenge head-on. “Our mainstage season is one of our anchors that we build our year upon and keeping it intact as everything around us was changing so rapidly was important to us,” she said. “That meant pushing through and finding solutions. Going off the grid is not what the spirit of the theatre is about. The show must always go on.”

While Director Sarah Elizabeth Wansley admitted Men on Boats is not the first play one would think of when choosing to explore a digital theatrical medium, she was excited by the opportunity to incorporate new creative approaches, including stop motion animation and playing with scale. “From the beginning, our approach was never to put the play we would have done in Pope Auditorium onto Zoom,” she said.

THE UNTOLD STORIES OF MEN ON BOATS

When speaking to the cast and creative team, Playwright Jaclyn Bethany said that she hoped Men on Boats would serve as a “gateway drug” to the stories left out of the play. “It’s important to investigate how our own identities intersect with those of American explorers,” agreed Director Sarah Elizabeth Wansley.

Our Virtual Dramaturgy Experience gives voice to just a few of these untold stories, including Calamity Jane, a woman who defied gender roles on the frontier; Harry Allen, a trans man on the frontier; Anne Bailey, a female soldier and frontier scout; and Rabbit and Hail-Storm, two Sioux men who formed a romantic relationship.

Assistant Director Emily Hoffert heeded the call, expanding her dramaturgical research to explore the narratives of those often sidelined by history.

To hear these stories, and learn more about the Ute Tribe, visit fordham.edu/mainstage and follow the links to our Virtual Dramaturgy Experience.

Mainstage: To the Bone (Lupe), Mr. Burns (Itchy), Antigonick (Chorus). Studio: Intelligence (Quinn). Off-Off Bway: Hayfever (Sophie) and L&amp;A (Lena) at the Tank. Regional: Luna (Mamรก) at LunaStage. Thank you to Sarah and the entire cast, crew, and creative team for an unforgettable start to senior year. Lots of love to my incredibly supportive family.

Olivia is a senior performance major. Select Fordham credits include: Mainstage: The Wolves (#13), Satellites (Kit), Antigonick (Messenger). Studio: Cock (W), Intelligence (Quinn). Endless thanks to the Sarah, Max, Janae and entire the cast and crew for their patience, love and support.

Studio: Intelligence (Valmira). Mainstage: Antigonick (Theban Citizen). Myca Hinton is a junior Theater Performance major, with a minor in Communications and Media Studies. She is excited to be making her Mainstage debut, for real this time! Special thanks to the cast and crew for an amazing experience. And a special

Mainstage: To the Bone (Juana). Studio: El desvarío (Soledad). I would like to thank the cast for all the laughs, the design and production teams for their jaw-dropping work, stage management for their amazing leadership and Sarah for creating a space where we no longer felt disconnected to the theatrical magic. I am eternally grateful to my wonderful family and friends!

Victoria is so excited to be back on the Fordham Mainstage, in this new virtual medium! She is currently a Junior Performance major. Mainstage: Airline Highway (Miss Ruby), The Wolves(#46) Studios: The Wallpaper Project (Actor), Louisiana Garbage Kings (Sarge), March On! (Josie), Where Does The Light Go? (ASM/Assistant Producer); Other: Sekhmet Sisterhood Cabaret (The Green Room 42). Huge thanks to this beautiful and brave team and my wonderful friends and family!

Mainstage: Twelfth Night (Malvolio). Studio: March On (Ella), The Tower (Storyteller). Off-Broadway: Comfort Women: A New Musical (Jansen) at the Peter Jay Sharp Theatre. Other: 12 Angry Jurors (Juror #2) with the Alpha NYC Theatre Company, Houston, We Have a Problem (Theodore, Co-creator) at The Tank, Seven Days to the End of the World (Quinn, Co-creator) at Dixon Place. Many thanks and so much love to the cast and crew.

Mainstage: Airline Highway (ASD). Studio: Cloud Tectonics (SD), The Most Massive Woman Wins (Carly), God of Carnage (ASD), Up, Up, &amp; Away! (Friend), Where Does the Light Go? (Chorus). New York: Ashley Everhart: Only Time (SD) at the Tank. Other: Legally Blonde (Serena). Many thanks and lots of love to this wonderful team, the family, and Kayla. PARTY BOAT!

shout out to family and Friends for their support!

Sarah Elizabeth Wansley is a New York-based director, producer and educator. Sarah is the Artistic Producer at Chautauqua Theater Company and was the inaugural recipient of the Cleveland Play House Artistic Directing Fellowship for Women. Recent directing projects include The Amish Project by Jessica Dickey at PlayMakers Repertory Company, Egress by Melissa Crespo and Sarah Saltwick at Cleveland Play House, Revolt. She Said. Revolt Again. by Alice Birch at Dobama Theatre, The Wolves by Sarah DeLappe at SUNY Purchase, The Seagull by Anton Chekhov with the

CPH/Case Western MFA program and A Midsummer Night’s Dream and The Amish Project at Chautauqua Theater Company. She is a New Georges Affiliated Artist, a 2018 Drama League Resident Artist, a 2015 Drama League Directing Fellow and a member of the 2011 Lincoln Center Director’s Lab. She is an Adjunct Faculty member at Fordham University. Upcoming: adapting Twelfth Night for Chautauqua Theater Company and directing a workshop of Miss Mitchell by Kristin Slaney with music by Tommy Crawford and Alex Grubbs with New York Stage and Film.

Other: The Scratch (stage manager) at 2nd Ave Arts Seattle, Madagascar The Musical (associate choreographer) at Aleooop summer theatre. Thank you to Sarah and Sasha, to Max and Janae, and to the cast and crew!

Shaun is a native of Cleveland, Ohio and holds an MFA in lighting design. He has designed for theatre, dance, and museums both locally and internationally. He started as the lighting and sound supervisor in the theatre program nine years ago. Despite the current challenges we all face Shaun is grateful for the opportunity to have such wonderful and talented colleagues and students to work with. Many thanks to everyone who has worked so hard to make this production happen.

Tim has worked as master carpenter for Pace University on the Modular Globe Theatre Project; as scene shop foreman for Brooklyn Scenic on their many projects, including Disneyâ&amp;#x20AC;&amp;#x2122;s The Lion King; and productions for The Roundabout and American Place Theatres. He has worked extensively in the New York Off-Broadway circuit as well as in film and television.

Costume Design: New York (Broadway): The Performers; Off Broadway: Lewiston-Clarkston , A Kid Like Jake, All American, Suicide, Inc. , The Dream of the Burning Boy, OohRah!, Outside People, Next Fall, Armed &amp; Naked in America, The Mistakes Madeline Made. OffOff Broadway: 7 Seasons Vampire Cowboys and lots more.

Mainstage: The Wolves (SM). Studio: Anne of the Thousand Days (PSM); Savonarola: A Pseudohistory in Puppets (PSM); Where Does The Light Go? (SM); DIMES (SM). Off-Broadway: Signature Theatre General Management Intern. Regional: The 25th Annual Putnam County Spelling Bee (PSM). Many thanks to Janae for being the most incredible SM and housemate ever. Also, Jayla and Claire, thanks for the snacks. Love to the fam.

Studio: My Papier Mache Monster (ALD); Up, Up, &amp; Away (ASM); Anne of the Thousand Days (ALD); Cloud Tectonics (APD); Savonarola: A Pseudohistory in Puppets (SM). Regional: Stage Management Intern with the Boston Lyric Opera and the Rebel Shakespeare Company. All the love to Max for living and working with me at the same time; also to Claire and Jayla for taking care of us.

Head of Design and Production

EXPLOR E OUR VIRTUA L DR A M ATURGY EXPERIENCE Go deeper into the world of John Wesley Powell, the explorer whose journal inspired Men on Boats. Discover more about the daily life of the expedition, listen to the untold stories of the Ute Tribe, and refresh your history knowledge with a crash course in Westward expansion. Then, go behind the scenes with interviews with the cast and creative team.

UP NEXT: UNCLE VA NYA - NOV EMBER 12, 13, &amp; 14 What in our natures prevents us from confronting a massive crisis for the planet and ourselves? Is despair the cause of our surrender to the earthâ&amp;#x20AC;&amp;#x2122;s destruction? Chekhov deliberately offers no answers, but the lives of those who inhabit this rural Russian estate embody the questions with exquisitely concrete detail. Directed by Matthew Maguire.

A PPLY TODAY Join our community of artists! Applications are due November 1, 2020. Visit fordham.edu/ theatre for more information. 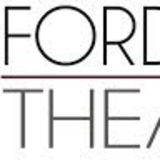