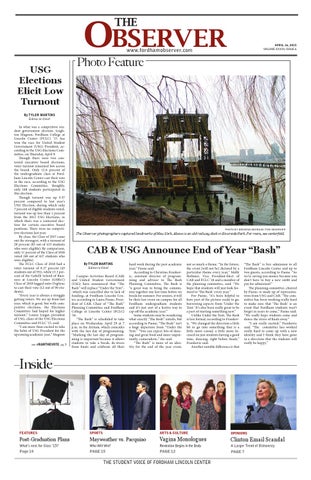 In what was a competitive student government election, Leighton Magoon, Fordham College at Lincoln Center (FCLC) ’17, has won the race for United Student Government (USG) President, according to the USG Elections Committee, on Thursday, April 9. Though there were two contested executive board elections, voter turnout remained low across the board. Only 12.6 percent of the undergraduate class at Fordham Lincoln Center cast their vote in the race, according to the USG Elections Committee. Roughly, only 188 students participated in this election. Though turnout was up 5.57 percent compared to last year’s USG Election, during which only 7 percent of eligible students voted, turnout was up less than 1 percent from the 2013 USG Elections, in which there was a contested election for certain executive board positions. There were no competitive elections last year. By class, the Class of 2017 came out the strongest, with a turnout of 20 percent (83 out of 415 students who were eligible). By comparison, only 11 percent of the Class of 2016 voted (48 out of 437 students who were eligible). The FCLC Class of 2018 had a voter turnout of 8.17 percent (45 students out of 551), while 13.3 percent of the Gabelli School of Business at Lincoln Center (GSBLC) Class of 2018 logged onto OrgSync to cast their vote (12 out of 90 students). “Every year is always a struggle getting voters. We are up from last year, which is good, but with competitive elections, the Elections Committee had hoped for higher turnout,” Louise Lingat, president of USG, chair of the USG Elections Committee and FCLC ’15, said. “I am more than excited to take the helm of USG President for the upcoming academic year,” Magoon see #RAMTHEVOTE pg. 5

PHOTO BY BRIKEND BEHRAMI /THE OBSERVER

The Observer photographers captured landmarks of New York. Above is an old railway dock in Riverside Park. For more, see centerfold.

Campus Activities Board (CAB) and United Student Government (USG) have announced that “The Bash” will replace “Under the Tent”-which was cancelled due to lack of funding--at Fordham Lincoln Center, according to Laura Paone, President of CAB, Chair of “The Bash” Planning Committee and Fordham College at Lincoln Center (FCLC) ’16. “The Bash” is scheduled to take place on Wednesday, April 29 at 7 p.m. in the Atrium, which coincides with the last day of programming. “Marking the last day of programming is important because it allows students to take a break, de-stress from finals and celebrate all their

hard work during the past academic year,” Paone said. According to Christina Frankovic, assistant director of programming and advisor to The Bash Planning Committee, The Bash is “a great way to bring the community together one last time before we break for summer. For seniors, it will be their last event on campus for all Fordham undergraduate students and it’s just sort of a festive way to cap off the academic year.” Some students may be wondering what exactly “The Bash” entails, but according to Paone, “The Bash” isn’t a huge departure from “Under the Tent.” “You can expect lots of dancing and great food and more importantly, camaraderie,” she said. “The Bash” is more of an identity for the end of the year event,

not so much a theme. “In the future, the event [will not be] dictated by a particular theme every year,” Molly Hellauer, Vice President-Elect of CAB and FCLC ’16 and a member of the planning committee, said. “We hope that students will just look forward to ‘The Bash’ every year.” For Paone, “it’s been helpful to have part of the picture ready to go, borrowing aspects from ‘Under the Tent.’ It’s also been really great to be a part of starting something new.” Unlike Under the Tent, The Bash is less formal, according to Frankovic. “We changed the direction a little bit to go into something that is a little more casual, a little more focused on just students having a good time, dancing, right before finals,” Frankovic said. Another notable difference is that

“The Bash” is free admission to all Fordham Lincoln Center and up to two guests, according to Paone. “So we’re saving you money because you don’t have to buy a new outfit and pay for admission!” The planning committee, chaired by Paone, is made up of representatives from USG and CAB. “The committee has been working really hard to make sure that ‘The Bash’ is an event that Fordham students won’t forget in years to come,” Paone said. “We really hope students come and dance the stress of finals away.” “I am really excited,” Frankovic said. “The committee has worked really hard to come up with a new identity and I think they have gone in a direction that the students will really be happy.”

Revolution Begins in the Body

A Larger Trend of Dishonesty 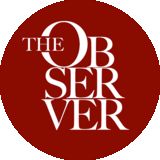