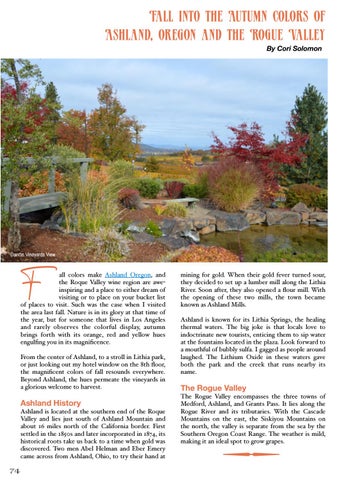 Fall into the Autumn Colors of Ashland, Oregon and the Rogue Valley By Cori Solomon

all colors make Ashland Oregon, and the Roque Valley wine region are aweinspiring and a place to either dream of visiting or to place on your bucket list of places to visit. Such was the case when I visited the area last fall. Nature is in its glory at that time of the year, but for someone that lives in Los Angeles and rarely observes the colorful display, autumn brings forth with its orange, red and yellow hues engulfing you in its magnificence. From the center of Ashland, to a stroll in Lithia park, or just looking out my hotel window on the 8th floor, the magnificent colors of fall resounds everywhere. Beyond Ashland, the hues permeate the vineyards in a glorious welcome to harvest.

Ashland History Ashland is located at the southern end of the Roque Valley and lies just south of Ashland Mountain and about 16 miles north of the California border. First settled in the 1850s and later incorporated in 1874, its historical roots take us back to a time when gold was discovered. Two men Abel Helman and Eber Emery came across from Ashland, Ohio, to try their hand at 74

mining for gold. When their gold fever turned sour, they decided to set up a lumber mill along the Lithia River. Soon after, they also opened a flour mill. With the opening of these two mills, the town became known as Ashland Mills. â&#x20AC;¨

Ashland is known for its Lithia Springs, the healing thermal waters. The big joke is that locals love to indoctrinate new tourists, enticing them to sip water at the fountains located in the plaza. Look forward to a mouthful of bubbly sulfa. I gagged as people around laughed. The Lithium Oxide in these waters gave both the park and the creek that runs nearby its name.

The Rogue Valley The Rogue Valley encompasses the three towns of Medford, Ashland, and Grants Pass. It lies along the Rogue River and its tributaries. With the Cascade Mountains on the east, the Siskiyou Mountains on the north, the valley is separate from the sea by the Southern Oregon Coast Range. The weather is mild, making it an ideal spot to grow grapes. "Our Beautiful World" issue takes a look at everywhere from Budapest to San Moritz, the Ozarks to the Caribbean, Hawaii to Nova Scotia, Ital...

"Our Beautiful World" issue takes a look at everywhere from Budapest to San Moritz, the Ozarks to the Caribbean, Hawaii to Nova Scotia, Ital...