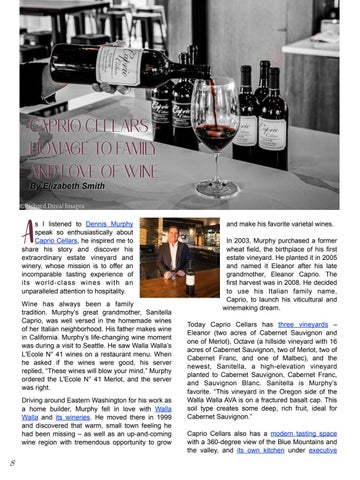 Homage to Family and Love of Wine By Elizabeth Smith

s I listened to Dennis Murphy speak so enthusiastically about Caprio Cellars, he inspired me to share his story and discover his extraordinary estate vineyard and winery, whose mission is to offer an incomparable tasting experience of its world-class wines with an unparalleled attention to hospitality. Wine has always been a family tradition. Murphy’s great grandmother, Sanitella Caprio, was well versed in the homemade wines of her Italian neighborhood. His father makes wine in California. Murphy’s life-changing wine moment was during a visit to Seattle. He saw Walla Walla’s L&#39;Ecole N° 41 wines on a restaurant menu. When he asked if the wines were good, his server replied, “These wines will blow your mind.” Murphy ordered the L&#39;Ecole N° 41 Merlot, and the server was right. Driving around Eastern Washington for his work as a home builder, Murphy fell in love with Walla Walla and its wineries. He moved there in 1999 and discovered that warm, small town feeling he had been missing – as well as an up-and-coming wine region with tremendous opportunity to grow

and make his favorite varietal wines. In 2003, Murphy purchased a former wheat field, the birthplace of his first estate vineyard. He planted it in 2005 and named it Eleanor after his late grandmother, Eleanor Caprio. The first harvest was in 2008. He decided to use his Italian family name, Caprio, to launch his viticultural and winemaking dream. Today Caprio Cellars has three vineyards – Eleanor (two acres of Cabernet Sauvignon and one of Merlot), Octave (a hillside vineyard with 16 acres of Cabernet Sauvignon, two of Merlot, two of Cabernet Franc, and one of Malbec), and the newest, Sanitella, a high-elevation vineyard planted to Cabernet Sauvignon, Cabernet Franc, and Sauvignon Blanc. Sanitella is Murphy’s favorite. “This vineyard in the Oregon side of the Walla Walla AVA is on a fractured basalt cap. This soil type creates some deep, rich fruit, ideal for Cabernet Sauvignon.” Caprio Cellars also has a modern tasting space with a 360-degree view of the Blue Mountains and the valley, and its own kitchen under executive

Our writers take you to lesser-known places around the world.