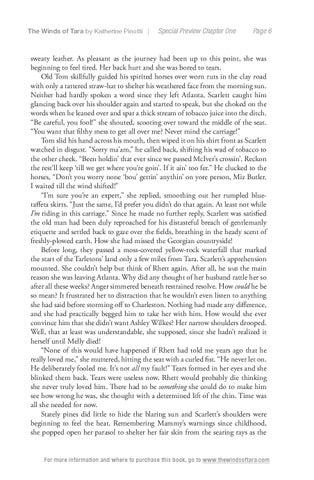 The Winds of Tara by Katherine Pinotti |

sweaty leather. As pleasant as the journey had been up to this point, she was beginning to feel tired. Her back hurt and she was bored to tears. Old Tom skillfully guided his spirited horses over worn ruts in the clay road with only a tattered straw-hat to shelter his weathered face from the morning sun. Neither had hardly spoken a word since they left Atlanta. Scarlett caught him glancing back over his shoulder again and started to speak, but she choked on the words when he leaned over and spat a thick stream of tobacco juice into the ditch. “Be careful, you fool!” she shouted, scooting over toward the middle of the seat. “You want that filthy mess to get all over me? Never mind the carriage!” Tom slid his hand across his mouth, then wiped it on his shirt front as Scarlett watched in disgust. ”Sorry ma’am,” he called back, shifting his wad of tobacco to the other cheek. “Been holdin’ that ever since we passed McIver’s crossin’. Reckon the rest’ll keep ‘till we get where you’re goin’. If it ain’ too fer.” He clucked to the horses, “Don’t you worry none ‘bou’ gettin’ anythin’ on yore person, Miz Butler. I waited till the wind shifted!” “I’m sure you’re an expert,” she replied, smoothing out her rumpled bluetaffeta skirts. “Just the same, I’d prefer you didn’t do that again. At least not while I’m riding in this carriage.” Since he made no further reply, Scarlett was satisfied the old man had been duly reproached for his distasteful breach of gentlemanly etiquette and settled back to gaze over the fields, breathing in the heady scent of freshly-plowed earth. How she had missed the Georgian countryside! Before long, they passed a moss-covered yellow-rock waterfall that marked the start of the Tarletons’ land only a few miles from Tara. Scarlett’s apprehension mounted. She couldn’t help but think of Rhett again. After all, he was the main reason she was leaving Atlanta. Why did any thought of her husband rattle her so after all these weeks? Anger simmered beneath restrained resolve. How could he be so mean? It frustrated her to distraction that he wouldn’t even listen to anything she had said before storming off to Charleston. Nothing had made any difference, and she had practically begged him to take her with him. How would she ever convince him that she didn’t want Ashley Wilkes? Her narrow shoulders drooped. Well, that at least was understandable, she supposed, since she hadn’t realized it herself until Melly died! “None of this would have happened if Rhett had told me years ago that he really loved me,” she muttered, hitting the seat with a curled fist. “He never let on. He deliberately fooled me. It’s not all my fault!” Tears formed in her eyes and she blinked them back. Tears were useless now. Rhett would probably die thinking she never truly loved him. There had to be something she could do to make him see how wrong he was, she thought with a determined lift of the chin. Time was all she needed for now. Stately pines did little to hide the blaring sun and Scarlett’s shoulders were beginning to feel the heat. Remembering Mammy’s warnings since childhood, she popped open her parasol to shelter her fair skin from the searing rays as the For more information and where to purchase this book, go to www.thewindsoftara.com 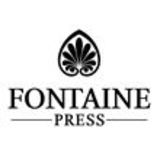 The Winds of Tara | Published by Fontaine Press

The Winds of Tara | Published by Fontaine Press