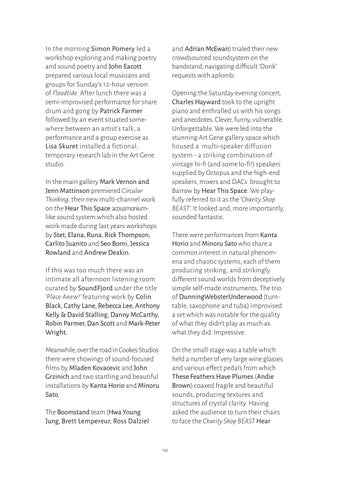 In the morning Simon Pomery led a workshop exploring and making poetry and sound poetry and John Eacott prepared various local musicians and groups for Sunday’s 12-hour version of Floodtide. After lunch there was a semi-improvised performance for snare drum and gong by Patrick Farmer followed by an event situated somewhere between an artist’s talk, a performance and a group exercise as Lisa Skuret installed a fictional, temporary research lab in the Art Gene studio.

and Adrian McEwan) trialed their new crowdsourced soundsystem on the bandstand, navigating difficult ‘Donk‘ requests with aplomb. Opening the Saturday evening concert, Charles Hayward took to the upright piano and enthralled us with his songs and anecdotes. Clever, funny, vulnerable. Unforgettable. We were led into the stunning Art Gene gallery space which housed a multi-speaker diffusion system - a striking combination of vintage hi-fi (and some lo-fi!) speakers supplied by Octopus and the high-end speakers, mixers and DACs brought to Barrow by Hear This Space. We playfully referred to it as the ‘Charity Shop BEAST’. It looked and, more importantly, sounded fantastic.

There were performances from Kanta Horio and Minoru Sato who share a common interest in natural phenomena and chaotic systems, each of them producing striking, and strikingly different sound worlds from deceptively simple self-made instruments. The trio of DunningWebsterUnderwood (turntable, saxophone and tuba) improvised a set which was notable for the quality of what they didn’t play as much as what they did. Impressive.

If this was too much there was an intimate all afternoon listening room curated by SoundFjord under the title ‘Place Anew!’ featuring work by Colin Black, Cathy Lane, Rebecca Lee, Anthony Kelly & David Stalling, Danny McCarthy, Robin Parmer, Dan Scott and Mark-Peter Wright. Meanwhile, over the road in Cookes Studios there were showings of sound-focused films by Mladen Kovacevic and John Grzinich and two startling and beautiful installations by Kanta Horio and Minoru Sato.

On the small stage was a table which held a number of very large wine glasses and various effect pedals from which These Feathers Have Plumes (Andie Brown) coaxed fragile and beautiful sounds, producing textures and structures of crystal clarity. Having asked the audience to turn their chairs to face the Charity Shop BEAST Hear Retrospective of the first four Full of Noises Festivals with contributions from curators and artists including Mobile Radio, Lauren Redhead...

Retrospective of the first four Full of Noises Festivals with contributions from curators and artists including Mobile Radio, Lauren Redhead...