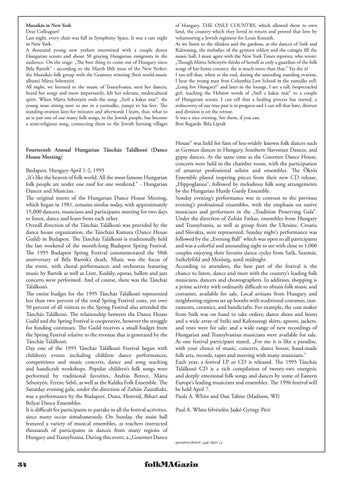 Muzsikás in New York Dear Colleagues! Last night, every chair was full in Symphony Space. It was a rare night in New York. A thousand young new yorkers intermixed with a couple dozen Hungarian scouts and about 50 graying Hungarian emigrants in the audience. On the stage: „e best thing to come out of Hungary since Béla Bartók” - according to the March l8th issue of the New Yorker; the Muzsikás folk group with the Grammy winning (best world-music album) Márta Sebestyén. All night, we listened to the music of Transylvania, seen her dances, heard her songs and more importantly, felt her tolerant, multicultural spirit. When Márta Sebestyén ends the song: „Szól a kakas már”, the young man sitting next to me in a yarmulke, jumps to his feet. e standing ovation lasts for minutes and afterwards I learn, that, what to us is just one of our many folk songs, to the Jewish people, has become a semi-religious song, connecting them to the Jewish farming villages

Fourteenth Annual Hungarian Táncház Találkozó (Dance House Meeting) Budapest, Hungary April 1-2, 1995 „It’s like the heaven of folk world. All the most famous Hungarian folk people are under one roof for one weekend.” - Hungarian Dancer and Musician. e original intent of the Hungarian Dance House Meeting, which began in 1981, remains similar today, with approximately 15,000 dancers, musicians and participants meeting for two days to listen, dance and learn from each other. Overall direction of the Táncház Találkozó was provided by the dance house organization, the Táncházi Kamara (Dance House Guild) in Budapest. e Táncház Találkozó is traditionally held the last weekend of the month-long Budapest Spring Festival. e 1995 Budapest Spring Festival commemorated the 50th anniversary of Béla Bartók’s death. Music was the focus of the event, with choral performances and orchestras featuring music by Bartók as well as Liszt, Kodály, operas, ballets and jazz concerts were performed. And of course, there was the Táncház Találkozó. e entire budget for the 1995 Táncház Találkozó represented less than two percent of the total Spring Festival costs, yet over 50 percent of all visitors to the Spring Festival also attended the Táncház Találkozó. e relationship between the Dance House Guild and the Spring Festival is cooperative, however the struggle for funding continues. e Guild receives a small budget from the Spring Festival relative to the revenue that is generated by the Táncház Találkozó. Day one of the 1995 Táncház Találkozó Festival began with children’s events including children dance performances, competitions and music concerts, dance and song teaching and handicraft workshops. Popular children’s folk songs were performed by traditional favorites, András Berecz, Márta Sebestyén, Ferenc Sebő, as well as the Kaláka Folk Ensemble. e Saturday evening gala, under the direction of Zoltán Zsuráfszki, was a performance by the Budapest, Duna, Honvéd, Bihari and Bólyai Dance Ensembles. It is difficult for participants to partake in all the festival activities, since many occur simultaneously. On Sunday, the main hall featured a variety of musical ensembles, as teachers instructed thousands of participants in dances from many regions of Hungary and Transylvania. During this event, a „Gourmet Dance

of Hungary, THE ONLY COUNTRY, which allowed them to own land, the country which they loved in return and proved that love by volunteering a Jewish regiment for Louis Kossuth. As we listen to the tilinkos and the gardons, as the dances of Szék and Kalotaszeg, the melodies of the gyimesi seklers and the csángós fill the music hall, I must agree with the New York Times reporter, who wrote: „ough Márta Sebestyén thinks of herself as only a guardian of the folk songs of her home country, she is much more than that.” Yes she is! I tan tell that, when at the end, during the unending standing ovation, I hear the young man fron Columbia Law School in the yamulke yell: „Long live Hungary!” and later in the lounge, I see a tall, bespectacled girl, teaching the Hebrew words of „Szól a kakas már” to a couple of Hungarian scouts. I can tell that a healing process has started, a rediscovery of our true past is in progress and I can tell that hate, distrust and division is on the retreat. It was a nice evening. See them, if you can. Best Regards: Béla Lipták

House” was held for fans of less-widely known folk dances such as German dances in Hungary, Southern Slavonian Dances, and gypsy dances. At the same time as the Gourmet Dance House, concerts were held in the chamber room, with the participation of amateur professional soloist and ensembles. e Ökrös Ensemble played inspiring pieces from their new CD release, „Hippoglassus”, followed by melodious folk song arrangements by the Hungarian Hurdy Gurdy Ensemble. Sunday evening’s performance was in contrast to the previous evening’s professional ensembles, with the emphasis on native musicians and performers in the „Tradition Preserving Gala”. Under the direction of Zoltán Farkas, ensembles from Hungary and Transylvania, as well as group from the Ukraine, Croatia and Slovakia, were represented. Sunday night’s performance was followed by the „Evening Ball” which was open to all participants and was a colorful and astounding sight to see with close to 1,000 couples enjoying their favorite dance cycles from Szék, Szatmár, Székelyföld and Mezőség, until midnight. According to attendees, the best part of the festival is the chance to listen, dance and meet with the country’s leading folk musicians, dancers and choreographers. In addition, shopping is a prime activity with ordinarily difficult to obtain folk music and costumes, available for sale. Local artisans from Hungary and neighboring regions set up booths with traditional costumes, instruments, ceramics, and handicrafts. For example, the coat maker from Szék was on hand to take orders; dance shoes and boots and a wide array of Széki and Kalotaszegi skirts, aprons, jackets, and vests were for sale; and a wide range of new recordings of Hungarian and Transylvanian musicians were available for sale. As one festival participant stated, „For me it is like a paradise, with your choice of music, concerts, dance house, hand-made folk arts, records, tapes and meeting with many musicians.” Each year, a festival LP or CD is released. e 1995 Táncház Találkozó CD is a rich compilation of twenty-two energetic and deeply emotional folk songs and dances by some of Eastern Europe’s leading musicians and ensembles. e 1996 festival will be held April 7. Paula A. White and Dan Talmo (Madison, WI) Paul A. White felvételén Jaskó György Pitti