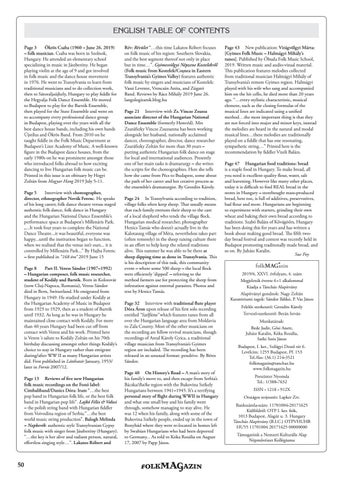 ENGLISH TABLE OF CONTENTS Page 3 Ökrös Csaba (1960 – June 26, 2019) – folk musician. Csaba was born in Szolnok, Hungary. He attended an elementary school specializing in music in Jászberény. He began playing violin at the age of 9 and got involved in folk music and the dance house movement in 1976. He went to Transylvania to learn from traditional musicians and to do collection work, then to Sátoraljaújhely, Hungary to play fiddle for the Hegyalja Folk Dance Ensemble. He moved to Budapest to play for the Bartók Ensemble, then played for the State Ensemble and went on to accompany every professional dance group in Budapest, playing over the years with all the best dance house bands, including his own bands Újstílus and Ökrös Band. From 2010 on he taught fiddle in the Folk Music Department at Budapest’s Liszt Academy of Music. A well-known figure in the Budapest dance houses, from the early 1980s on he was prominent amongst those who introduced folks abroad to how exciting dancing to live Hungarian folk music can be. Printed in this issue is an obituary by Hegyi Zoltán from Magyar Hang 2019 July 5-11. Page 5 Interview with choreographer, director, ethnographer Novák Ferenc. He speaks of his long career, folk dance theatre versus staged authentic folk dance, folk dance in Hungary and the Hungarian National Dance Ensemble’s performance space at Budapest’s Millenáris Park. „...It took four years to complete the National Dance Theatre...it was beautiful, everyone was happy...until the institution began to function, when we realized that the venue isn’t ours... it is controlled by Millenáris Park...” By Hajba Ferenc – first published in “168 óra” 2019 June 15 Page 8 Part II. Veress Sándor (1907–1992) – Hungarian composer, folk music researcher, student of Kodály and Bartók. Born in Kolozsvár (now Cluj-Napoca, Romania), Veress Sándor died in Bern, Switzerland. He emigrated from Hungary in 1949. He studied under Kodály at the Hungarian Academy of Music in Budapest from 1925 to 1929, then as a student of Bartók until 1932. As long as he was in Hungary he maintained close contact with Kodály. For more than 40 years Hungary had been cut off from contact with Veress and his work. Printed here is Veress ’s salute to Kodály Zoltán on his 70th birthday discussing amongst other things Kodály’s choice to stay in Hungary rather than emigrate during/after WW II as many Hungarian artists did. First published in Látóhatár January, 1953/ later in Forrás 2007/12. Page 13 Reviews of five new Hungarian folk music recordings on the Fonó label: Cimbaliband/Danics Dóra: Iram “…the best pop band in Hungarian folk life, or the best folk band in Hungarian pop life”. Lajkó Félix & Vołosi – the polish string band with Hungarian fiddler from Voivodina region of Serbia.”…the best world music string production”. Balogh Melinda – Napkerék: authentic style Transylvanian Gypsy folk music with singer from Jászberény (Hungary). ”…the key is her alive and radiant person, natural, effortless singing style…”. Lakatos Róbert and

Rév: Révület “…this time Lakatos Róbert focuses on folk music of his region: Southern Slovakia, and the best segment thereof not only in place but in time…”. Gyimesvölgyi Népzene Kostelekről (Folk music from Kostelek/Coșnea in Eastern Transylvania’s Gyimes Valley) features authentic folk music by singers and musicians of Kostelek: Vaszi Levente, Vrencsán Anita, and Zúgató Band. Reviews by Rácz Mihály 2019 June 26. langologitarok.blog.hu Page 21 Interview with Zs. Vincze Zsuzsa associate director of the Hungarian National Dance Ensemble (formerly Honvéd). Mrs Zsuráfszky Vincze Zsuzsanna has been working alongside her husband, nationally acclaimed dancer, choreographer, director, dance researcher Zsuráfszky Zoltán for more than 30 years – putting authentic Hungarian folk dance on stage for local and international audiences. Presently one of her main tasks is dramaturgy – she writes the scripts for the choreographies. Here she tells how she came from Pécs to Budapest, some about the path of her career and her creative process as the ensemble’s dramaturgist. By Grozdits Károly. Page 24 In Transylvania according to tradition, village folks often keep sheep. That usually means that each family entrusts their sheep to the care of a local shepherd who tends the village flock. Hungarian medical researcher, photographer Henics Tamás who doesn’t actually live in the Kalotaszeg village of Méra, nevertheless takes part (often remotely) in the sheep raising culture there in an effort to help keep the related traditions alive. This summer he was able to be there at sheep dipping time as done in Transylvania. This is his description of this task, this community event – where some 500 sheep – the local flock were efficiently ‘dipped’ – referring to the method farmers use for protecting the sheep from infestation against external parasites. Photos and text by Henics Tamás. Page 32 Interview with traditional flute player Dóra Áron upon release of his first solo recording entitled “Szélfútta” which features tunes from all over the Hungarian language area from Moldavia to Zala County. Most of the other musicians on the recording are fellow revival musicians, though recordings of Antal Károly Gyica, a traditional village musician from Transylvania’s Gyimes region are included. The recording has been released in an unusual format: pendrive. By Béres Sándor. Page 40 On History’s Road – A man’s story of his family’s move to, and then escape from Serbia’s Bácska/Bačka region with the Bukovina Székely Hungarians between 1941–1945. It’s a terrifying personal story of flight during WWII in Hungary and what one small boy and his family went through, somehow managing to stay alive. He was 12 when his family, along with some of the Bukovina Székely people, ended up in the town of Bonyhád where they were re-located in homes left by Swabian Hungarians who had been deported to Germany... As told to Kóka Rozália on August 17, 2007 by Papp János.

Page 43 New publication: Virágvölgyi Márta: [Gyimes Folk Music – Halmágyi Mihály’s tunes]. Published by Óbuda Folk Music School, 2019. Written music and audio-visual material. This publication features melodies collected from traditional musician Halmágyi Mihály of Transylvania’s remote Gyimes region. Halmágyi played with his wife who sang and accompanied him on the hit cello, he died more than 20 years ago. “…every stylistic characteristic, musical element, such as the closing formulas of the musical lines are indicated using a unified method…the most important thing is that they are not forced into major and minor keys, instead the melodies are heard in the natural and modal musical lines…these melodies are traditionally played on a fiddle that has one resonating, sympathetic string…” Printed here is the recommendation by fiddler Vizeli Balázs. Page 47 Hungarian food traditions: bread is a staple food in Hungary. To make bread, all you need is excellent quality flour, water, salt and leavening. However like many other places, today it is difficult to find REAL bread in the stores in Hungary – storebought mass-produced bread, here too, is full of additives, preservatives, bad flour and more. Hungarians are beginning to experiment with starters, grinding their own wheat and baking their own bread according to traditions. Szabó Balázs of Kővágóőrs, Hungary has been doing this for years and has written a book about making good bread. The fifth twoday bread festival and contest was recently held in Budapest promoting traditonally made bread, and so on. By Juhász Katalin. Sue Foy