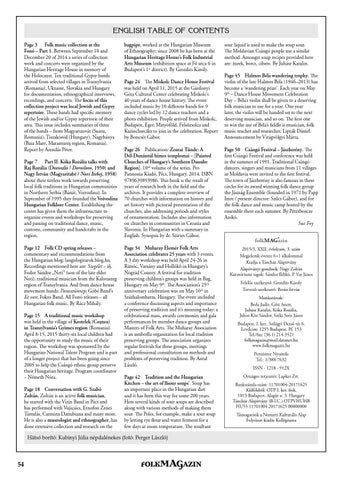 ENGLISH TABLE OF CONTENTS Page 3 Folk music collection at the Fonó – Part 1. Between September 10 and December 20 of 2014 a series of collection work and concerts were organized by the Hungarian Heritage House in memory of the Holocaust. Ten traditional Gypsy bands arrived from selected villages in Transylvania (Romania), Ukraine, Slovakia and Hungary for documentation, ethnographical interviews, recordings, and concerts. The focus of this collection project was local Jewish and Gypsy repertoire. These bands had specific memory of the Jewish and/or Gypsy repertorie of their area. This issue includes summaries of three of the bands – from Magyarszovát (Suatu, Romania), Tiszakóród (Hungary), Nagybánya (Baia Mare, Maramureş region, Romania). Report by Árendás Péter. Page 7 Part II. Kóka Rozália talks with Raj Rozália (Doroszló / Doroslovo, 1950) and Nagy István (Magyaritabé / Novi Itebej, 1958) about their tireless work towards preserving local folk traditions in Hungarian communities in Northern Serbia (Bánát, Voivodina). In September of 1995 they founded the Voivodina Hungarian Folklore Center. Establishing the center has given them the infrastructure to organize events and workshops for preserving and passing on traditional dance, music, customs, community and handcrafts in the region. Page 12 Folk CD spring releases – commentary and recommendations from the Hungarian blog: langologitarok.blog.hu. Recordings mentioned here are: Szegelet – ifj. Fodor Sándor „Neti” (son of the late elder Neti), traditional musician from the Kalotaszeg region of Transylvania. And from dance house movement bands: Parasztünnep; Góbé Band’s Ez van; Fokos Band. All Fonó releases – all Hungarian folk music. By Rácz Mihály. Page 15 A traditional music workshop was held in the village of Kostelek (Coşnea) in Transylvania’s Gyimes region (Romania). April 8-15, 2015 thirty-six local children had the opportunity to study the music of their region. The workshop was sponsored by the Hungarian National Talent Program and is part of a longer project that has been going since 2005 to help the Csángó ethnic group perserve their Hungarian heritage. Program coordinator – Németh Nóra. Page 18 Conversation with G. Szabó Zoltán. Zoltán is an active folk musician, he started with the Vizin Band in Pécs and has performed with Vujicsics, Etnofon Zenei Társulás, Carmina Danubiana and many more. He is also a museologist and ethnographer, has done extensive collection and research on the

bagpipe, worked at the Hungarian Museum of Ethnography; since 2008 he has been at the Hungarian Heritage House’s Folk Industrial Arts Museum (exhibition space at Fő utca 6 in Budapest’s 1st district). By Grozdits Károly. Page 24 The Miskolc Dance House Festival was held on April 11, 2015 at the Gárdonyi Géza Cultural Center celebrating Miskolc’s 40 years of dance house history. The event included music by 10 different bands for 9 dance cycles led by 12 dance teachers and a photo exhibition. People arrived from Miskolc, Budapest, Eger, Matyóföld, Felsőzsolca and Kazincbarcika to join in the celebration. Report by Boncsér Gábor. Page 26 Publication: Zentai Tünde: A Dél-Dunántúl hímes templomai – [Painted Churches of Hungary’s Southern Danube Region]. 10th volume of the series. Pro Pannonia Kiadó, Pécs, Hungary. 2014. ISBN 9789639893986. This book is the result of years of research both in the field and the archives. It provides a complete overview of 70 churches with information on history and art history with pictorial presentation of the churches, also addressing periods and styles of ornamentation. Includes also information on churches in communities in Croatia and Slavonia. In Hungarian with a summary in English. Synopsis by dr. Szirtes Gábor.

Page 45 Halmos Béla wandering trophy. The violin of the late Halmos Béla (1946–2013) has become a ‘wandering prize’. Each year on May 9th – Dance House Movement Celebration Day – Béla’s violin shall be given to a deserving folk musician to use for a year. One year later, the violin will be handed on to the next deserving musician, and so on. The first one to win the use of Béla’s fiddle is musician, folk music teacher and researcher, Lipták Dániel. Announcement by Virágvölgyi Márta. Page 50 Csángó Festival – Jászberény. The first Csángó Festival and conference was held in the summer of 1991. Traditional Csángó dancers, singers and musicians from 11 villages in Moldavia were invited to the first festival. The town of Jászberény is also famous in these circles for its award winning folk dance group the Jászság Ensemble (founded in 1971 by Papp Imre / present director: Szűcs Gábor), and for the folk dance and music camp hosted by the ensemble there each summer. By Péterbencze Anikó. Sue Foy

Page 34 Muharay Elemér Folk Arts Association celebrates 25 years with 3 events. A 3 day workshop was held April 24-26 in Rimóc, Varsány and Hollókő in Hungary’s Nógrád County. A festival for tradition preserving children’s groups was held in Bag, Hungary on May 9th. The Association’s 25th anniversary celebration was on May 16th in Százhalombatta, Hungary. The event included a conference discussing aspects and importance of preserving tradition and it’s meaning today; a celebrational mass, awards ceremonies and gala performances by member dance groups and Masters of Folk Arts. The Muharay Association is an umbrella organization for local tradition preserving groups. The association organizes regular festivals for these groups, meetings and professional consultation on methods and problems of perserving tradition. By Antal László.

Page 42 Tradition and the Hungarian Kitchen – the art of sour soups’. Soup has an important place in the Hungarian diet and it has been this way for some 200 years. Here several kinds of sour soups are described along with various methods of making them sour. The Poles, for example, make a sour soup by letting rye flour and water ferment for a few days at room temperature. The resultant

sour liquid is used to make the soup sour. The Moldavian Csángó people use a similar method. Amongst soup recipes provided here are: żurek, borcs, cibere. By Juhász Katalin.