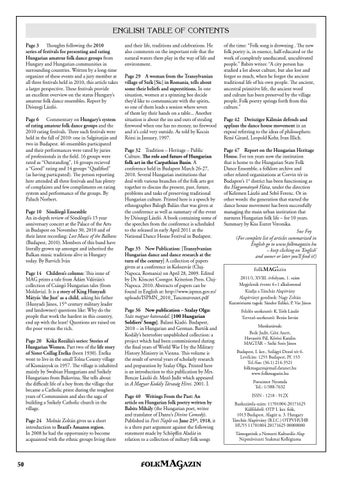 ENGLISH TABLE OF CONTENTS Page 3 Thoughts following the 2010 series of festivals for presenting and rating Hungarian amateur folk dance groups from Hungary and Hungarian communities in surrounding countries. Written by a long-time organizer of these events and a jury member at all three festivals held in 2010, this article takes a larger perspective. These festivals provide an excellent overview on the status Hungary’s amateur folk dance ensembles. Report by Diószegi László. Page 6 Commentary on Hungary’s system of rating amateur folk dance groups and the 2010 rating festivals. Three such festivals were held in the fall of 2010: one in Salgótarján and two in Budapest. 46 ensembles participated and their performances were rated by juries of professionals in the ﬁeld. 16 groups were rated as “Outstanding”, 16 groups recieved a “Good” rating and 14 groups “Qualiﬁed” (as having particpated). The person reporting here attended all three festivals and has plenty of complaints and few compliments on rating system and performance of the groups. By Paluch Norbert. Page 10 Söndörgő Ensemble An in-depth review of Söndörgő’s 15 year anniversary concert at the Palace of the Arts in Budapest on November 30, 2010 and of their latest recording: Lost Music of the Balkans (Budapest, 2010). Members of this band have literally grown up amongst and inherited the Balkan music traditions alive in Hungary today. By Barvich Iván Page 14 Children’s column: This issue of MAG prints a tale from Ádám Valérián’s collection of Csángó Hungarian tales (from Moldavia). It is a story of King Hunyadi Mátyás ’the Just’ as a child, asking his father (Hunyadi János, 15th century military leader and landowner) questions like: Why do the people that work the hardest in this country, end up with the least? Questions are raised on the poor versus the rich. Page 20 Kóka Rozália’s series: Stories of Hungarian Women. Part two of the life story of Sister Csillag Etelka (born 1930). Etelka went to live in the small Tolna County village of Kismányok in 1957. The village is inhabited mainly by Swabian Hungarians and Székely Hungarians from Bukovina. She tells about the diﬃcult life of a boy from the village that became a Catholic priest during the toughest years of Communism and also the saga of building a Székely Catholic church in the village. Page 24 Molnár Zoltán gives us a short introduction to Brazil’s Amazon region. In 2008 he had the opportunity to become acquainted with the ethnic groups living there

and their life, traditions and celebrations. He also comments on the important role that the natural waters there play in the way of life and environment. Page 29 A woman from the Transylvanian village of Szék [Sic] in Romania, tells about some their beliefs and superstitions. In one situation, women at a spinning bee decide they’d like to communicate with the spirits, so one of them leads a session where seven of them lay their hands on a table... Another situation is about the ins and outs of stealing ﬁrewood when one has no money, no ﬁrewood and it’s cold very outside. As told by Kocsis Rózsi in January, 1997. Page 32 Tradition – Heritage – Public Culture. The role and future of Hungarian folk art in the Carpathian Basin. A conference held in Budapest March 26-27, 2010. Several Hungarian institutions that deal with various branches of the folk arts got together to discuss the present, past, future, problems and tasks of preserving traditional Hungarian culture. Printed here is a speech by ethnographer Balogh Balázs that was given at the conference as well as summary of the event by Diószegi László. A book containing some of the speeches from the conference is scheduled to the released in early April 2011 at the National Dance House Festival in Budapest. Page 35 New Publication: [Transylvanian Hungarian dance and dance research at the turn of the century] A collection of papers given at a conference in Kolozsvár (ClujNapoca, Romania) on April 28, 2009. Edited by Dr. Könczei Csongor. Kriterion Press. ClujNapoca. 2010. Abstracts of papers can be found in English at: http://www.ispmn.gov.ro/ uploads/ISPMN_2010_Tancmuveszet.pdf Page 36 New publication – Szalay Olga: Száz magyar katonadal. [100 Hungarian Soldiers’ Songs]. Balassi Kiadó. Budapest, 2010 – in Hungarian and German. Bartók and Kodály’s heretofore unpublished collection: a project which had been commissioned during the ﬁnal years of World War I by the Military History Ministry in Vienna. This volume is the result of several years of scholarly research and preparation by Szalay Olga. Printed here is an introduction to this publication by Mrs. Bencze László dr. Mező Judit which appeared in A Magyar Kodály Társaság Hírei. 2001. I. Page 40 Writings From the Past: An article on Hungarian folk poetry written by Babits Mihály (the Hungarian poet, writer and translator of Dante’s Divine Comedy). Published in Pesti Napló on June 25th, 1918, it is a three part argument against the following statement made by Schöpﬂin Aladár in relation to a collection of miltary folk songs

of the time: “Folk song is drowning . The new folk poetry is, in essence, half-educated or the work of completely uneducated, uncultivated people.” Babits writes: “A city person has studied a lot about culture, but also lost and forgot so much, when he forgot the ancient traditional life of his own people. The ancient, ancestral primitive life, the ancient word and culture has been preserved by the village people. Folk poetry springs forth from this culture.” Page 42 Dreisziger Kálmán defends and applaus the dance house movement in an exposé referring to the ideas of philosophers: René Girard, Leopold Kohr, Ivan Illich. Page 47 Report on the Hungarian Heritage House. For ten years now the institution that is home to the Hungarian State Folk Dance Ensemble, a folklore archive and other related organizations at Corvin tér in Budapest’s 1st district has been functioning as the Hagyományok Háza, under the direction of Kelemen László and Sebő Ferenc. Or in other words: the generation that started the dance house movement has been successfully managing the main urban institution that nurtures Hungarian folk life – for 10 years. Summary by Kiss Eszter Veronika. Sue Foy (For complete list of articles summarized in English go to www.folkmagazin.hu – keep clicking on ’English’ and sooner or later you’ll ﬁnd it!)