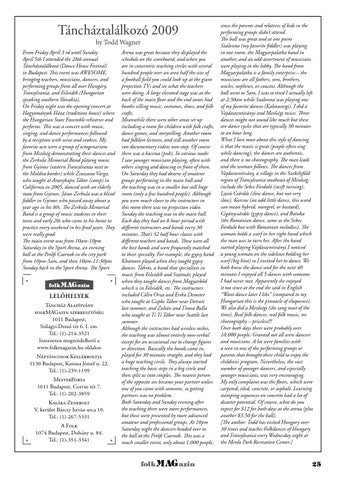 Táncháztalálkozó 2009 by Todd Wagner From Friday April 3 rd until Sunday April 5th I attended the 28th annual Táncháztalálkozó (Dance House Festival) in Budapest. This event was AWESOME, bringing teachers, musicians, dancers, and performing groups from all over Hungary, Transylvania, and Felvidék (Hungarian speaking southern Slovakia). On Friday night was the opening concert at Hagyományok Háza (traditions house) where the Hungarian State Ensemble rehearses and performs. This was a concert with music, singing, and dance performances followed by a reception with wine and cookies. My favorite acts were a group of octogenarians from Mezőség demonstrating their dances and the Zerkula Memorial Band playing music from Gyimes (eastern Transylvania next to the Moldva border) while Zsuzsana Varga, who taught at Aranykapu Tábor (camp) in California in 2005, danced with an elderly man from Gyimes. János Zerkula was a blind ﬁddler in Gyimes who passed away about a year ago in his 80s. The Zerkula Memorial Band is a group of music students in their teens and early 20s who came to his home to practice every weekend in his ﬁnal years. They were really good. The main event was from 10am-10pm Saturday in the Sport Arena, an evening ball at the Petőﬁ Csarnok in the city park from 10pm-5am, and then 10am-11:30pm Sunday back in the Sport Arena. The Sport

Arena was great because they displayed the schedule on the scoreboard, and when you are in concentric teaching circles with several hundred people over an area half the size of a football ﬁeld you could look up at the giant projection TVs and see what the teachers were doing. A large elevated stage was at the back of the main ﬂoor and the end zones had booths selling music, costumes, shoes, and folk crafts. Meanwhile there were other areas set up including a room for children with folk crafts, dance games, and storytelling. Another room had folklore lectures, and still another room ran documentary videos non-stop. Of course there was a kocsma (pub). In various nooks I saw younger musicians playing, often with others singing and dancing in front of them. On Saturday they had dozens of amateur groups performing in the main hall and the teaching was in a smaller but still huge room (only a few hundred people). Although you were much closer to the instructors in this room there was no projection video. Sunday the teaching was in the main hall. Each day they had an 8 hour period with diﬀerent instructors and bands every 30 minutes. That’s 32 half hour classes with diﬀerent teachers and bands. These were all the best bands and were frequently matched to their specialty. For example, the gypsy band Khamoro played when they taught gypsy dances. Tükrös, a band that specializes in music from Felvidék and Szatmár, played when they taught dances from Magyarbőd which is in Felvidék, etc. The instructors included Câlin Orza and Erika Demeter who taught at Csipke Tábor near Detroit last summer, and Zoltán and Tímea Balla who taught at Ti Ti Tábor near Seattle last summer. Although the instructors had wireless mikes, the teaching was almost entirely non-verbal except for an occasional cue to change ﬁgures or direction. Basically the bands came in, played for 30 minutes straight, and they had a huge teaching circle. They always started teaching the basic steps in a big circle and then split us into couples. The nearest person of the opposite sex became your partner unless one of you came with someone, so getting partners was no problem. Both Saturday and Sunday evening after the teaching there were more performances, but these were presented by more advanced amateur and professional groups. At 10pm Saturday night the dancers headed over to the ball at the Petőﬁ Csarnok. This was a much smaller event, only about 1,000 people,

since the parents and relatives of kids in the performing groups didn’t attend. The ball was great and at one point Szalonna (my favorite ﬁddler) was playing in one room, the Magyarpalatka band in another, and an odd assortment of musicians were playing in the lobby. The band from Magyarpalatka is a family enterprise – the musicians are all fathers, sons, brothers, uncles, nephews, or cousins. Although the ball went to 5am, I was so tired I actually left at 2:30am while Szalonna was playing one of my favorite dances (Kalotaszegi). I did a Vajdaszentiványi and Mesőségi twice. Three dances might not sound like much but these are dance cycles that are typically 30 minutes to an hour long. What I love most about this style of dancing is that the music is great (people often sing while dancing), the dances are authentic, and there is no choreography. The man leads and the woman follows. The dances from Vajdaszentivány, a village in the Szekélyföld region of Transylvania southeast of Mezőség, include the Sebes Forduló (swift turning), Lassú Csárdás (slow dance, but not very slow), Korcsos (an odd little dance, this word can mean hybrid, mongrel, or bastard), Cigánycsárdás (gypsy dance), and Batuka (the Romanian dance, same as the Sebes Forduló but with Romanian melodies). The woman holds a scarf in her right hand which the man uses to turn her. After the band started playing Vajdaszentiványi I noticed a young woman on the sidelines holding her scarf (big hint) so I invited her to dance. We both knew the dance and for the next 40 minutes I enjoyed all 5 dances with someone I had never met. Apparently she enjoyed it too since at the end she said in English “Want dance later I like” (compared to my Hungarian this is the pinnacle of eloquence). We also did a Mezőségi (she sang most of the time). Real folk dances, real folk music, no choreography – priceless!!! Over both days there were probably over 10,000 people. Granted not all were dancers and musicians. A lot were families with a teen in one of the performing groups or parents that brought their child to enjoy the children’s program. Nevertheless, the vast number of younger dancers, and especially younger musicians, was very encouraging. My only complaint was the ﬂoors, which were carpeted, tiled, concrete, or asphalt. Learning stamping sequences on concrete had a lot of disaster potential. Of course, what do you expect for $12 for both days at the arena (plus another $3.50 for the ball). [The author: Todd has visited Hungary over 30 times and teaches Folkdances of Hungary and Transylvania every Wednesday night at the Menlo Park Recreation Center.]