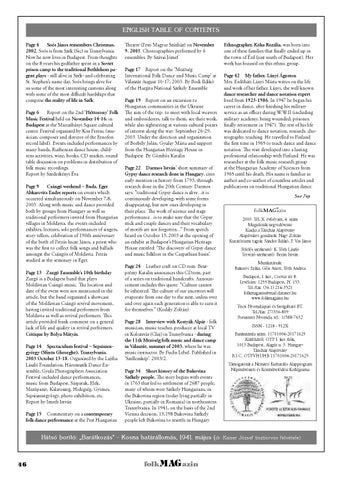 ENGLISH TABLE OF CONTENTS Page 4 Soós János remembers Christmas, 2002. Soós is from Szék (Sic) in Transylvania. Now he now lives in Budapest. From thoughts on the 8 years his godfather spent in a Soviet prison camp to the traditional Bethlehem pagent plays - still alive in Szék- and celebrating St. Stephen’s name day, Soós brings alive for us some of the most interesting customs along with some of the most difficult hardships that comprise the reality of life in Szék. Page 6 Report on the 2nd ’Héttorony’ Folk Music Festival held on November 14-16, in Budapest at the Marczibányi Square cultural center. Festival organized by Kiss Ferenc (musician, composer and director of the Etnofon record label). Events included performances by many bands, Ruthenian dance house, childrens activities, wine, books, CD market, round table discussion on problems in distribution of folk music recordings. Report by Szederkényi Éva Page 9 Csángó weekend – Buda, Eger Abkarovits Endre reports on events which occurred simultaneously on November 7,8, 2003. Along with music and dance provided both by groups from Hungary as well as traditional performers invited from Hungarian villages in Moldavia, the events included exhibits, lectures, solo performances of singers, story tellers, celebration of 190th anniversary of the birth of Petrás Incze János, a priest who was the first to collect folk songs and ballads amongst the Csángós of Moldavia. Petrás studied at the seminary in Eger. Page 13 Zurgó Ensemble’s 10th birthday Zurgó is a Budapest band that plays Moldávian Csángó music. e location and date of the event were not mentioned in the article, but the band organized a showcase of the Moldavian Csángó revival movement, having invited traditional performers from Moldavia as well as revival performers. is article provided frank comment on a general lack of life and quality in revival performers. Critique by Bolya Mátyás. Page 14 Spectaculum festival – Sepsiszengyörgy (Sfintu Gheorghe), Transylvania. 2003 October 13-18. Organized by the Lajtha László Foundation, Háromszék Dance Ensemble, Gyula Photographers Association Festival included dance performances, music from Budapest, Sárpatak, Elek, Mezõpanit, Kalatoszeg, Hidegség, Gyimes, Sepsiszentgyörgy, photo exhibition, etc. Report by Imreh István Page 15 Commentary on a contemporary folk dance performance at the Pest Hungarian

eatre (Pesti Magyar Színház) on November 9, 2003. Choreographies performed by 6 ensembles. By Szávai József Page 17 Report on the ’Mezõség International Folk Dance and Music Camp’ at Válaszút August 10-17, 2003. By Bodi Ildikó of the Hargita National Székely Ensemble Page 19 Report on an excursion to Hungarian communities in the Ukraine e aim of the trip: to meet with local weavers and embroiderers, talk to them, see their work, while also sightseeing at various cultural points of interest along the way. September 26-29, 2003. Under the direction and organization of Borbély Jolán, Gyulay Mária and support from the Hungarian Heritage House in Budapest. By Gömbös Katalin Page 22 Darmos István’ short summary of Gypsy dance research done in Hungary, cites early mention in history from 1793, through research done in the 20th Century. Darmos says: “traditional Gypsy dance is alive...it is continuously developing, with some forms disappearing, but new ones developing in their place. e work of science and stage performance...is to make sure that the Gypsy stick and couple dances and their vocabulary of motifs are not forgotten...” From speech heard on October 13, 2003 at the opening of an exhibit at Budapest’s Hungarian Heritage House entitled: ’e discovery of Gypsy dance and music folklore in the Carpathian basin’. Page 24 Leather craft on CD rom. Beszprémy Katalin announces this CDrom, part of a series on traditional handcrafts. Announcement includes this quote: “Culture cannot be inherited. e culture of our ancestors will evaporate from one day to the next, unless over and over again each generation is able to earn it for themselves.” (Kodály Zoltán) Page 28 Interview with Kostyák Alpár - folk musician, music teacher, producer at local TV in Kolozsvár (Cluj) in Transylvania - during the 11th Mezõség folk music and dance camp in Válaszút, summer of 2003, where he was music instructor. By Fuchs Lehel. Published in ’Szellemkép’. 2003/2. Page 34 Short history of the Bukovina Székely people. e story begins with events in 1763 that led to settlement of 2687 people, many of whom were Székely Hungarians, in the Bukovina region (today lying partially in Ukraine, partially in Romania) in northeastern Transylvania. In 1941, on the basis of the 2nd Vienna decision, 13,198 Bukovina Székely people left Bukovina to resettle in Hungary.

Ethnographer, Kóka Rozália, was born into one of these families that finally ended up in the town of Érd (just south of Budapest). Her work has focused on this ethnic group. Page 42 My father, Lányi Ágoston Mrs. Erdõháti Lányi Mária writes on the life and work of her father. Lányi, the well known dance researcher and dance notation expert lived from 1923-1986. In 1947 he began his career in dance, after finishing his military service as an officer during W.W.II (including military academy, being wounded, prisoner, finally retirement in 1947). e rest of his life was dedicated to dance notation, research, choreography, teaching. He travelled to Finland the first time in 1965 to teach dance and dance notation. e visit developed into a lasting professional relationship with Finland. He was researcher at the folk music research group at the Hungarian Academy of Sciences from 1965 until his death. His name is familiar as author and co-author of countless articles and publications on traditional Hungarian dance. Sue Foy