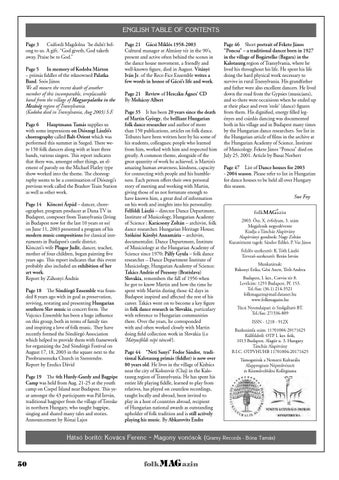 ENGLISH TABLE OF CONTENTS Page 3 Csáfordi Magdolna ’he didn’t belong to us. A gift. “God giveth, God taketh away, Praise be to God.” Page 5 In memory of Kodoba Márton – prímás ﬁddler of the reknowned Palatka Band. Soós János We all mourn the recent death of another member of this incomparable, irreplaceable band from the village of Magyarpalatka in the Mezõség region of Transylvania. (Kodoba died in Transylvania, Aug 2003) S.F. Page 6 Hauptmann Tamás supplies us with some impressions on Diószegi László’s choreography called Balt-Orient which was performed this summer in Szeged. There were 150 folk dancers along with at least three bands, various singers. This report indicates that there was, amongst other things, an element of parody on the Michael Flatley type show worked into the theme. The choreography seems to be a continuation of Diószegi’s previous work called the Brashov Train Station as well as other work. Page 14 Könczei Árpád – dancer, choreographer, program producer at Duna TV in Budapest, composer from Transylvania (living in Budapest now for the last 10 years or so) on June 11, 2003 presented a program of his modern music compositions for classical instruments in Budapest’s castle district. Könczei’s wife Plugor Judit, dancer, teacher, mother of four children, began painting ﬁve years ago. This report indicates that this event probably also included an exhibition of her art work. Report by Záhonyi Ándrás Page 18 The Söndörgõ Ensemble was founded 8 years ago with its goal as preservation, reviving, restating and presenting Hungarian southern Slav music in concert form. The Vujcsics Ensemble has been a huge inﬂuence on this group, both in terms of family ties and inspiring a love of folk music. They have recently formed the Söndörgõ Association which helped to provide them with framework for organizing the 2nd Söndörgõ Festival on August 17, 18, 2003 in the square next to the Preobrazsenszka Church in Szentendre. Report by Eredics Dávid Page 19 The 4th Hurdy-Gurdy and Bagpipe Camp was held from Aug. 21-25 at the youth camp on Csepel Island near Budapest. This year amongst the 43 participants was Pál István, traditional bagpiper from the village of Tereske in northern Hungary, who taught bagpipe, singing and shared many tales and stories. Announcement by Rónai Lajos

Page 21 Gácsi Miklós 1958-2003 Cultural manager at Almássy tér in the 90’s, present and active often behind the scenes in the dance house movement, a friendly and well-known ﬁgure, died in August. Vitányi Iván Jr. of the Rece-Fice Ensemble writes a few words in honor of Gácsi’s life and work. Page 21 Review of Herczku Ágnes’ CD By Mohácsy Albert Page 35 It has been 20 years since the death of Martin György, the brilliant Hungarian folk dance researcher and author of more than 150 publications, articles on folk dance. Tributes have been written here by his some of his students, colleagues; people who learned from him, worked with him and respected him greatly. A common theme, alongside of the great quantity of work he achieved, is Martin’s amazing human awareness, kindness, capacity for connecting with people and his humbleness. Each person oﬀers their own personal story of meeting and working with Martin, giving those of us not fortunate enough to have known him, a great deal of information on his work and insights into his personality. Felföldi László – director Dance Department, Institute of Musicology, Hungarian Academy of Science ; Karácsony Zoltán – archivist, folk dance researcher. Hungarian Heritage House; Szõkéné Károlyi Annamária – archivist, documentalist. Dance Department, Institute of Musiciology at the Hungarian Academy of Science since 1970; Pálfy Gyula – folk dance researcher – Dance Department Institute of Musiciology, Hungarian Academy of Science; Takács András of Pozsony (Bratislava) Slovakia, remembers the fall of 1956 when he got to know Martin and how the time he spent with Martin during those 42 days in Budapest inspired and aﬀected the rest of his career. Takács went on to become a key ﬁgure in folk dance research in Slovakia, particulary with reference to Hungarian communities there. Over the years, he corresponded with and often worked closely with Martin doing ﬁeld collection work in Slovakia (i.e ’Mátyusföldi népi táncok’). Page 44 “Neti Sanyi” Fodor Sándor, traditional Kalotaszeg prímás (ﬁddler) is now over 80 years old. He lives in the village of Kisbács near the city of Kolozsvár (Cluj) in the Kalotaszeg region of Transylvania. He has spent his entire life playing ﬁddle, learned to play from relatives, has played on countless recordings, taught locally and abroad, been invited to play in a host of countries abroad, recipient of Hungarian national awards as outstanding upholder of folk tradition and is still actively playing his music. By Abkarovits Endre

Page 46 Short portrait of Fekete János “Poncsa” – a traditional dancer born in 1927 in the village of Bogártelke (Bagara) in the Kalotaszeg region of Transylvania, where he lived his throughout his life. He spent his life doing the hard physical work necessary to survive in rural Transylvania. His grandfather and father were also excellent dancers. He lived down the road from the Gypsies (musicians), and so there were occaisions when he ended up at their place and even ’stole’ (dance) ﬁgures from them. His digniﬁed, energy ﬁlled legényes and csárdás dancing was documented both in his village and in Budapest many times by the Hungarian dance researchers. See list in the Hungarian article of ﬁlms in the archive at the Hungarian Academy of Science, Institute of Musicology. Fekete János “Poncsa” died on July 25, 2001. Article by Busai Norbert Page 47 List of Dance houses for 2003 - 2004 season. Please refer to list in Hungarian for dance houses to be held all over Hungary this season. Sue Foy