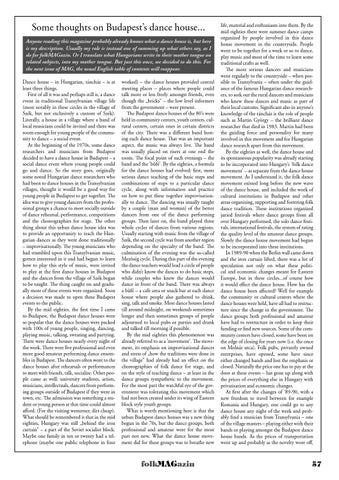 Some thoughts on Budapest’s dance house... Anyone reading this magazine probably already knows what a dance house is, but here is my description. Usually my role is instead one of summing up what others say, as I do for folkMAGazin. Or I translate what Hungarians write in their mother tongue on related subjects, into my mother tongue. But just this once, we decided to do this. For the next issue of MAG, the usual English table of contents will reappear. Dance house – in Hungarian, táncház – is at least three things. First of all it was and perhaps still is, a dance event in traditional Transylvanian village life (most notably in these circles in the village of Szék, but not exclusively a custom of Szék). Literally, a house in a village where a band of local musicians could be invited and there was room enough for young people of the community to dance – a social event. At the beginning of the 1970s, some dance researchers and musicians from Budapest decided to have a dance house in Budapest – a social dance event where young people could go and dance. So the story goes, originally some noted Hungarian dance researchers who had been to dance houses in the Transylvanian villages, thought it would be a good way for young people in Budapest to get together. The idea was to give young dancers from the professional groups a chance to meet socially outside of dance rehearsal, performance, competitions and the choreographies for stage. The other thing about this urban dance house idea was to provide an opportunity to teach the Hungarian dances as they were done traditionally – improvisationally. The young musicians who had stumbled upon this Transylvanian music, gotten interested in it and had begun to learn how to play this style of music, were invited to play at the ﬁrst dance houses in Budapest and the dances from the village of Szék began to be taught. The thing caught on and gradually more of these events were organized. Soon a decision was made to open these Budapest events to the public. By the mid eighties, the ﬁrst time I came to Budapest, the Budapest dance houses were so popular that the dance houses were packed with 100s of young people, singing, dancing, playing music, talking, sweating and partying. There were dance houses nearly every night of the week. There were ﬁve professional and even more good amateur performing dance ensembles in Budapest. The dancers often went to the dance houses after rehearsals or performances to meet with friends, talk, socialize. Other people came as well: university students, artists, musicians, intellectuals, dancers from performing groups outside of Budapest if they were in town, etc. The admission was something a student or young person at that time could almost aﬀord. (For the visiting westerner, dirt cheap). What should be remembered is that in the mid eighties, Hungary was still „behind the iron curtain” – a part of the Soviet socialist block. Maybe one family in ten or twenty had a telephone (maybe one public telephone in four

worked) – the dance houses provided central meeting places – places where people could talk more or less freely amongst friends, even though the „bricks” – the low level informers from the government – were present. The Budapest dance houses of the 80’s were held in community centers, youth centers, cultural centers, certain ones in certain districts of the city. There was a diﬀerent band hosting each dance house. That was an important aspect, the music was always live. The band was usually placed on risers at one end the room. The focal point of such evenings – the band and the ’büfé’. By the eighties, a formula for the dance houses had evolved: ﬁrst, more serious dance teaching of the basic steps and combinations of steps to a particular dance cycle, along with information and practice on how to put these together improvisationally to dance. The dancing was usually taught by a couple (man and woman) of the better dancers from one of the dance performing groups. Then later on, the band played three whole cycles of dances from various regions. Usually starting with music from the village of Szék, the second cycle was from another region depending on the specialty of the band. The culmination of the evening was the so-called Mezõség cycle. During this part of the evening the dance teachers would lead a circle of people who didn’t know the dances to do basic steps, while couples who knew the dances would dance in front of the band. There was always a büfé – a cafe area or snack bar at each dance house where people also gathered to drink, sing, talk and smoke. Most dance houses lasted till around midnight, on weekends sometimes longer and then sometimes groups of people adjourned to local pubs or parties and drank and talked till morning if possible. By the mid eighties this phenomenon was already referred to as a ’movement’. The movement, its emphasis on improvisational dances and stress of „how the traditions were done in the village” had already had an eﬀect on the choreographies of folk dance for stage, and on the style of teaching dance – at least in the dance groups sympathetic to the movement. For the most part the watchful eye of the government was tolerating this movement which had not been created under its wing of Eastern block style youth groups. What is worth mentioning here is that the urban Budapest dance houses was a new thing begun in the 70s, but the dance groups, both professional and amateur were for the most part not new. What the dance house movement did for these groups was to breathe new

life, material and enthusiasm into them. By the mid eighties there were summer dance camps organized by people involved in this dance house movement in the countryside. People went to be together for a week or so to dance, play music and most of the time to learn some traditional crafts as well. The more serious dancers and musicians went regularly to the countryside – when possible to Transylvania – often under the guidance of the famous Hungarian dance researchers, to seek out the rural dancers and musicians who knew these dances and music as part of their local customs. Signiﬁcant also in anyone’s knowledge of the táncház is the role of people such as Martin György – the brilliant dance researcher that died in 1983. Martin had been the guiding force and personality for many involved in this movement and for Hungarian dance research apart from this movement. By the eighties as well, the dance house and its spontaneous popularity was already starting to be incorporated into Hungary’s ’folk dance movement’ – as separate from the dance house movement. As I understand it, the folk dance movement existed long before the new wave of the dance house, and included the work of cultural institutions in Budapest and other areas organizing, supporting and fostering folk dance tradition. These institutions organized juried festivals where dance groups from all over Hungary performed, the solo dance festivals, international festivals, the system of rating the quality level of the amateur dance groups. Slowly the dance house movement had begun to be incorporated into these institutions. In 1989-90 when the Berlin wall came down and the iron curtain lifted, there was a lot of speculation not only on what these political and economic changes meant for Eastern Europe, but in these circles...of course how it would eﬀect the dance house. How has the dance house been aﬀected? Well for example the community or cultural centers where the dance houses were held, have all had to restructure since the change in the government. The dance groups both professional and amateur have had to restructure in order to keep their funding or ﬁnd new sources. Some of the community centers have closed, some have been on the edge of closing for years now (i.e. the once on Molnár utca). Folk pubs, privately owned enterprises, have opened, some have since either changed hands and lost the emphasis or closed. Naturally the price one has to pay at the door at these events – has gone up along with the prices of everything else in Hungary with privatisation and economic changes. At ﬁrst after the changes of ’89-90, with a new freedom to travel between for example Romania and Hungary, one could go to any dance house any night of the week and probably ﬁnd a musician from Transylvania – one of the village masters – playing either with their bands or playing amongst the Budapest dance house bands. As the prices of transportation went up and probably as the novelty wore oﬀ,