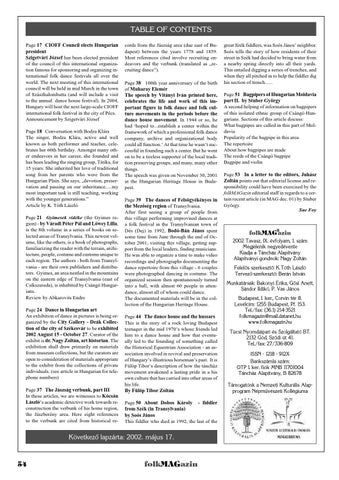 TABLE OF CONTENTS Page 17 CIOFF Council elects Hungarian president Szigetvári József has been elected president of the council of this international organization famous for sponsoring and organizing international folk dance festivals all over the world. The next meeting of this international council will be held in mid March in the town of Szászhalombatta (and will include a visit to the annual dance house festival). In 2004, Hungary will host the next large-scale CIOFF international folk festival in the city of Pécs. Announcement by Szigetvári József Page 18 Conversation with Bodza Klára The singer, Bodza Klára, active and well known as both performer and teacher, celebrates her 60th birthday. Amongst many other endeavors in her career, she founded and has been leading the singing group, Tátika, for 15 years. She inherited her love of traditional song from her parents who were from the Hungarian Plain. She says, „devotion, preservation and passing on our inheritance.....my most important task is still teaching, working with the younger generations.” Article by K. Tóth László Page 21 Gyimesek vidéke (the Gyimes region) - by Váradi Péter Pál and Lőwey Lilla, is the 8th volume in a series of books on selected areas of Transylvania. This newest volume, like the others, is a book of photographs, familiarizing the reader with the terrain, architecture, people, costume and customs unique to each region. The authors - both from Transylvania - are their own publishers and distributors. Gyimes, an area nestled in the mountains on the eastern edge of Transylvania (east of Csíkszereda), is inhabited by Csángó Hungarians. Review by Abkarovits Endre Page 24 Dance in Hungarian art An exhibition of dance in pictures is being organized by the City Gallery - Deák Collection of the city of Székesvár to be exhibited 2002 August 15 - October 27. Curator of the exhibit is dr. Nagy Zoltán, art historian. The exhibition shall draw primarily on materials from museum collections, but the curators are open to consideration of materials appropriate to the exhibit from the collections of private individuals. (see article in Hungarian for telephone numbers) Page 37 The Jászság verbunk, part III In these articles, we are witnesses to Kócsán László’s academic detective work towards reconstruction the verbunk of his home region, the Jászberény area. Here eight references to the verbunk are cited from historical re-

cords from the Jászság area (due east of Budapest) between the years 1778 and 1859. Most references cited involve recruiting endeavors and the verbunk (translated as „recruiting dance”). Page 38 100th year anniversary of the birth of Muharay Elemér The speech by Vitányi Iván printed here, celebrates the life and work of this important figure in folk dance and folk culture movements in the periods before the dance house movement. In 1944 or so, he had ‘hoped to...establish a center within the framework of which a professional folk dance company, archive and organizational body could all function.’ At that time he wasn’t successful in founding such a center. But he went on to be a tireless supporter of the local tradition preserving groups, and many, many other things. The speech was given on November 30, 2001 at the Hungarian Heritage House in Budapest. Page 39 The dances of Felsőgyékényes in the Mezőség region of Transylvania. After first seeing a group of people from this village performing improvised dances at a folk festival in the Transylvanian town of Dés (Dej) in 1992, Bodó-Bán János spent some time from June through the end of October 2001, visiting this village, getting support from the local leaders, finding musicians. He was able to organize a time to make video recordings and photographs documenting the dance repertoire from this village - 6 couples were photographed dancing in costume. The organized session then spontaneously turned into a ball, with almost 60 people in attendance, almost all of whom could dance. The documented materials will be in the collection of the Hungarian Heritage House. Page 44 The dance house and the hussars This is the story of a rock loving Budapest teenager in the mid 1970’s whose friends led him to a dance house and how that eventually led to the founding of something called the Historical Equestrian Association - an association involved in revival and preservation of Hungary’s illustrious horseman’s past. It is Fülöp Tibor’s description of how the táncház movement awakened a lasting pride in a his own culture that has carried into other areas of his life. By Fülöp Tibor Zoltán Page 50 About Dobos Károly - fiddler from Szék (in Transylvania) by Soós János This fiddler who died in 1992, the last of the

great Szék fiddlers, was Soós János’ neighbor. Soós tells the story of how residents of their street in Szék had decided to bring water from a nearby spring directly into all their yards. This entailed digging a series of trenches, and when they all pitched in to help the fiddler dig his section of trench...... Page 51 Bagpipers of Hungarian Moldavia part II. by Stuber György A second helping of information on bagpipers of this isolated ethnic group of Csángó Hungarians. Sections of this article discuss: What bagpipes are called in this part of Moldavia Popularity of the bagpipe in this area The repertoire About how bagpipes are made The reeds of the Csángó bagpipe Bagpipe and violin Page 53 In a letter to the editors, Juhász Zoltán points out that editorial license and responsibility could have been exercised by the folkMAGazin editorial staff in regards to a certain recent article (in MAG dec. 01) by Stuber György. Sue Foy