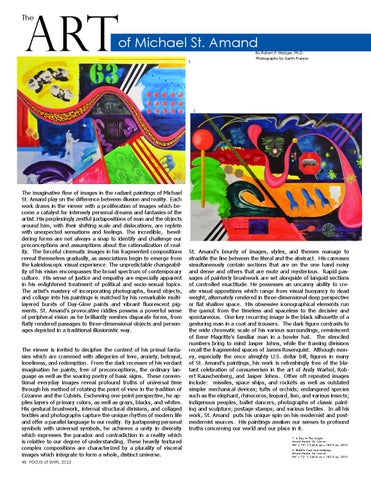 The imaginative flow of images in the radiant paintings of Michael St. Amand play on the difference between illusion and reality. Each work draws in the viewer with a proliferation of images which become a catalyst for intensely personal dreams and fantasies of the artist. His perplexingly zestful juxtapositions of man and the objects around him, with their shifting scale and dislocations, are replete with unexpected sensations and feelings. The incredible, bewildering forms are not always a snap to identify and challenge our preconceptions and assumptions about the rationalization of reality. The forceful cinematic images in his fragmented compositions reveal themselves gradually, as associations begin to emerge from the kaleidoscopic visual experience. The unpredictable changeability of his vision encompasses the broad spectrum of contemporary culture. His sense of justice and empathy are especially apparent in his enlightened treatment of political and socio-sexual topics. The artist's mastery of incorporating photographs, found objects, and collage into his paintings is matched by his remarkable multilayered bursts of Day-Glow paints and vibrant fluorescent pigments. St. Amand's provocative riddles possess a powerful sense of peripheral vision as he brilliantly meshes disparate forms, from flatly rendered passages to three-dimensional objects and personages depicted in a traditional illusionistic way. The viewer is invited to decipher the content of his primal fantasies which are crammed with allegories of love, anxiety, betrayal, loneliness, and redemption. From the dark recesses of his verdant imagination he paints, free of preconceptions, the ordinary language as well as the soaring poetry of basic signs. These conventional everyday images reveal profound truths of universal time through his method of rotating the point of view in the tradition of Cezanne and the Cubists. Eschewing one-point perspective, he applies layers of primary colors, as well as grays, blacks, and whites. His gestural brushwork, internal structural divisions, and collaged textiles and photographs capture the unique rhythm of modern life and offer a parallel language to our reality. By juxtaposing personal symbols with universal symbols, he achieves a unity in diversity which expresses the paradox and contradiction in a reality which is relative to our degree of understanding. These heavily textured complex compositions are characterized by a plurality of visceral images which integrate to form a whole, distinct universe. 48 FOCUS of SWFL 2013

St. Amand's bounty of images, styles, and themes manage to straddle the line between the literal and the abstract. His canvases simultaneously contain sections that are on the one hand noisy and dense and others that are mute and mysterious. Rapid passages of painterly brushwork are set alongside of languid sections of controlled exactitude. He possesses an uncanny ability to create visual oppositions which range from visual buoyancy to dead weight, alternately rendered in three-dimensional deep perspective or flat shallow space. His obsessive iconographical elements run the gamut from the timeless and spaceless to the decisive and spontaneous. One key recurring image is the black silhouette of a gesturing man in a coat and trousers. The dark figure contrasts to the wide chromatic scale of his various surroundings, reminiscent of Rene Magritte's familiar man in a bowler hat. The stenciled numbers bring to mind Jasper Johns, while the framing divisions recall the fragmented spaces of James Rosenquist. Although money, especially the once almighty U.S. dollar bill, figures in many of St. Amand's paintings, his work is refreshingly free of the blatant celebration of consumerism in the art of Andy Warhol, Robert Rauschenberg, and Jasper Johns. Other oft repeated images include: missiles, space ships, and rockets as well as outdated simpler mechanical devices; tufts of orchids; endangered species such as the elephant, rhinoceros, leopard, lion, and various insects; indigenous peoples, ballet dancers, photographs of classic painting and sculpture; postage stamps; and various textiles. In all his work, St. Amand puts his unique spin on his modernist and postmodernist sources. His paintings awaken our senses to profound truths concerning our world and our place in it. 1. A Day In The Jungle Mixed Media On Canvas 96” x 72” | 243.8 cm x 182.9 cm, 2013 2. Bubble Gum and Lollipops Mixed Media On Canvas 96” x 72” | 243.8 cm x 182.9 cm, 2013 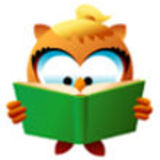 Focus of SWFL - Getting Creative

A muse of everything inspired and unexpected, this issue is about the many ways people show the world their inspirational intellect. A visua...

Focus of SWFL - Getting Creative

A muse of everything inspired and unexpected, this issue is about the many ways people show the world their inspirational intellect. A visua...