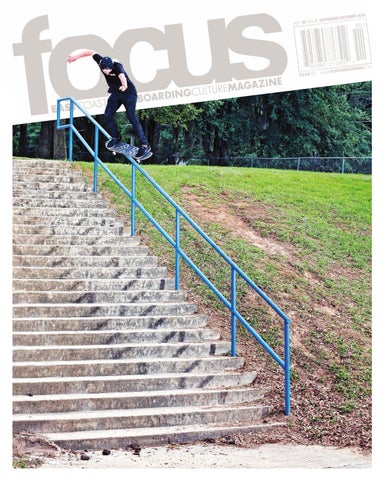 behind the lens liaM aNNiS

hammertime TRiCK OF THE MONTH

Send submissions to info@focusskatemag.com or via snail mail to the address above

Anthony Biggs keeps his creative juices flowing without too much frustration while he performs this beautiful front shuv to fakie.

The Frustratingly Beautiful World of Skateboarding WORDS :: Mazur I often have a really hard time writing these intros for every issue of Focus. Maybe it’s ‘cause I wait ‘til last minute to do them and the stress of just getting it done hinders my ability to write anything. Just like when learning a new trick, I often times type up a million different opening paragraphs before feeling I finally nailed it. This is actually the first attempt at this one, so let’s see where we end up.

Running a skateboarding magazine is no easy task! From an outsiders perspective it seems like it would probably be pretty easy, and quite fun… But there are just so many moving parts to it, that often times, things slip through the cracks no matter how much you try and pay attention to detail. I swear there are more moving parts to running and distributing a magazine than the NASA spaceship has. But, it is incredible how some of the most difficult tasks just fall into place so easily, while other things you’d peg as easy seem to always be the toughest. I guess you could sort of relate it to how some people can do frontside flips easily, but have a harder time with backside flips, and vice versa.

Over the years I have learned that the actual art of skateboarding will lead you to live a more full and interesting life. You have experiences that can’t even be explained to someone outside of the skateboarding world. You’ll travel all over and see all sorts of different cultures, even if just local ones, and have more of an appreciation for life. It keeps the creative juices of your mind flowing. Even if you can’t skate some monster

rail or natural skate obstacle, you’ll still have dreams and visions of tricks that would look good on them. I know I’ll definitely be some 65-year-old man one day pretending my hands are a board doing a trick as I walk down a set of stairs. And because I am that old I won’t have to explain why I look so goofy. Skateboarding is forever young! But the business side of skateboarding will just eat away at your soul. It has to be one of the hardest businesses to survive in. I mean, in my opinion, if you can make a business survive in skateboarding—and I mean ANY business, whether it be a shop, park, magazine, board company, etc.—then you can pretty much accomplish anything else life can throw at you. One thing about the skateboarding business is almost anyone can get involved in it. As skateboarders, we are all pretty independent people and often times have to learn through our own mistakes on how to do something right. This is the gift that the actual process of skateboarding bestows upon you. You’re not afraid to make a few mistakes in order to learn how to do things right. It’s a frustratingly beautiful thing… If that makes sense. Sometimes things just come easy and other times things take a lot of work and multiple tries to figure out. Like this intro for instance… As I said before, usually it takes many attempts to get something solid down, but this time I think I nailed it first try. And, I believe this is probably the first time in the nine years of publishing Focus I did this, too.

Slave To the Board WORDS :: Nico Magellan

Take a couple seconds and try to visualize the most incredible ‘thing’ in your world. It could be absolutely anything really, but let it be the most meaningful and most liberating thing. Something you would never turn your back on in a billion years. Now visualize a missile coming down and vaporizing that thing into a fiery hell storm of nothingness. Every remnant of a hope or dream vanishes in a flash as you crumble downward, crippled by the pain. On March 15, 2013, fate’s heavy hammer came down on me similar to how Earth might accept a meteor. I planted my foot wrong coming off a large hubba with a gap at the bottom, my knee crumbled and I made a noise that was probably heard by the Yeti’s on Uranus. Soon after, I found out that my ACL had snapped like a rubber band and I wasn’t going to be rolling again for a long time. In our world, two days without skateboarding is a long time. So, to have someone tell you it will be at least 6-8 months before you can roll again was devastating. It’s pretty much the ultimate slam for any growing skateboarder on the road to freedom, but it’s an experience that’s survivable. There is a light at the end of the tunnel, although faint, it is real. For most of us, skateboarding is our ‘thing’ because it gives us the motivation to power through and overcome gnarly challenges, and injuries are part of that. There’s a lot to learn from this particular injury and recovery, but there’s a few key things that got me all the way through to a full recovery. Be grateful all the time. Not just for good things but for bad things too. They will guide you in the right direction. Every experience has played a part in leading you to where you are right now and they will continue leading you. Be grateful for family and friends and the time you spend with them. Be with them. Put down the phone and take advantage of their company because they are all you really have in this lifetime. Be grateful you can walk around. Be grateful you can take a shit, or piss on your own. These things become impossible when you’re laid up in bed after getting your leg cut open and your knee swapped out with some dead guy’s piece.

Respect more. Not only your elders, or others you may know nothing about, but also yourself. The body is the real temple on this planet. It allows you to do anything you want if you take care of it. It can heal itself in almost any circumstance if you offer it the proper time and energy, and it’s really good at moving around so use it. Try to practice yoga and meditate, get sunlight, drink clean water, and eat healthy food - do it because your body is a fun place to live. I learned quickly that there are few things more miserable than feeling like you’re in a useless body.

The final, most important thing to take away from all of this is the grand realization that, as skateboarders, we are masters of our own realities. We get to see our thoughts and intentions translate immediately into the physical world. If you carry doubt and worry you will most likely beef it, on a board or in life. Almost everyone starts out with that fear, but it’s the cleansing of it that matters. When your absolute confidence is perfectly in tune with your ability, you can do anything. I could have let all the fear of not skating anymore drown myself the day my knee blew out, but I didn’t and I won’t because skateboarding, at the very least, teaches you to stand by your convictions and forge forward. The late, great, Robin Williams put it perfectly. “You’re only given a little spark of madness. You mustn’t lose it.” Not in a billion years. Cheers.

No ACLs were snapped during the making of this gap to crook.

SEE MORE OF KEVIN AT ZOOYORK.COM

the mission is simple, if you’d like to see your handy work featured in Focus as part of our, “Insta-Faves,” you better start following us (@FocusSkateMag) and use the hashtags: #FocusSkateMag and #EastCoastExcellence on your rad photos. We’re always browsing and reposting finds from our hashtags, and in addition to that, we’re also picking 9 each issue to put in the mag. here’s your chance for 15 minutes of internet fame to be solidified in print for a lifetime.