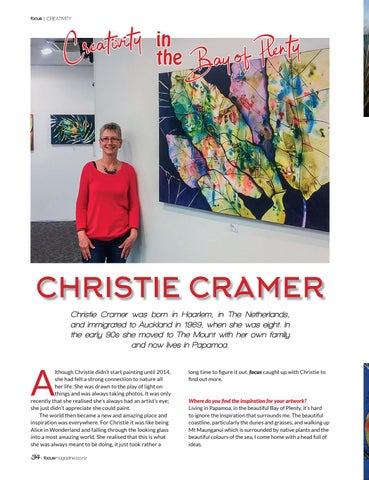 CHRISTIE CRAMER Christie Cramer was born in Haarlem, in The Netherlands, and immigrated to Auckland in 1969, when she was eight. In the early 90s she moved to The Mount with her own family and now lives in Papamoa.

lthough Christie didn’t start painting until 2014, she had felt a strong connection to nature all her life. She was drawn to the play of light on things and was always taking photos. It was only recently that she realised she’s always had an artist’s eye; she just didn’t appreciate she could paint. The world then became a new and amazing place and inspiration was everywhere. For Christie it was like being Alice in Wonderland and falling through the looking glass into a most amazing world. She realised that this is what she was always meant to be doing, it just took rather a

long time to figure it out. focus caught up with Christie to find out more. 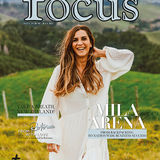