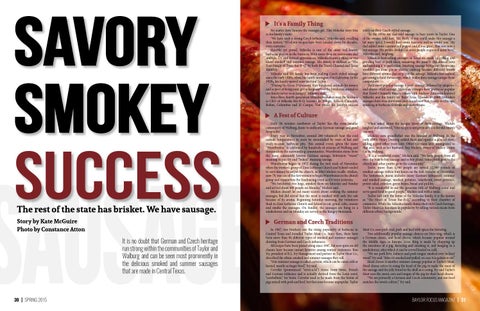 sausage The rest of the state has brisket. We have sausage. Story by Kate McGuire Photo by Constance Atton

It is no doubt that German and Czech heritage run strong within the communities of Taylor and Walburg and can be seen most prominently in the delicious smoked and summer sausages that are made in Central Texas.

It's a Family Thing No matter how famous the sausages get, Tim Mikeska stays true to his family’s roots. “We have such a strong Czech influence,” Mikeska said, recalling their history. “All of our recipes have been handed down for decades, even centuries.” Humble yet proud, Mikeska is one of the most well-known barbecue players in the business. With more than six restaurants and multiple TV and festival appearances, Mikeska knows a thing or two about smoked and summer sausage. His family is dubbed as “The First Family of Texas Bar-B-Q” by both the Travel Channel and Texas Monthly. Mikeska said his family has been making Czech styled sausage since the early 1880s, when his family immigrated to Galveston. In the 1920s, his family moved towards rural Taylor. “During the Great Depression, they butchered animals for money and as part of being paid, got to keep parts of the butchered animal so our family never went hungry,” Mikeska said. Since then, fourth-generation Mikeska has taken over the business as CEO of Mikeska Bar-B-Q. Located in Temple, Killeen, Cameron, Belton, Columbus and El Campo, Tim prizes his family’s success

solely on their Czech-styled sausage. “In the 1950s my dad sold sausage to beer joints in Taylor. One of the owners told him, ‘Mr. Rudy, if you could make this sausage a bit more spicy, I would have more business and so would you.’ My dad added more cayenne red pepper and it was great. This was now a hot sausage. His profits doubled as more people requested more beer,” Mikeska said, laughing. Mikeska’s best-selling sausages in Texas are made by cutting and grinding beef or pork meat, seasoning the meat to the desired taste and smoking it to perfection. Smoking sausage brings out flavors one wouldn’t get from gas or electric cooking because different woods have different aromas that seep into the sausage. Mikeska uses natural gut casing to hold the sausage, which makes their sausage unique from competitors. Their most popular sausage is pork sausage, followed by jalapeñoand-cheese-filled sausage. Mikeska’s sausages have grown so popular that Travel Channel’s Bizarre Foods with Andrew Zimmern featured Mikeska and his family on their Texas Episode in 2008. Mikeska’s sausages have won numerous awards and now Tim travels to Chicago, speaking at barbecue festivals and conventions.

A Fest of Culture Only 30 minutes northwest of Taylor lies the even smaller community of Walburg, home to authentic German sausage and good hospitality. Every year in November, around 200 volunteers bear the cool outside temperatures to soon be surrounded by rows of hot and ready-to-cook barbecue pits. This annual event, given the name “Wurstbraten,” is celebrated by hundreds of citizens of Walburg and thousands in the surrounding communities. Wurstbraten stems from the more commonly known German sausage, brätwurst; “wurst” meaning to pan fry and “bräten” meaning sausage. Wurstbraten began in 1972 during the first week of November when the women’s group of Zion Lutheran Church and School needed to earn money to carpet the church, as Ethel Micken recalls. Micken, now 79, was one of the first women to begin Wurstbraten in the church group and remembers the fundraising event as if it were yesterday. “We butchered two hogs, smoked them on Saturday and Sunday and served about 400 people on Monday,” Micken said. Micken doesn’t let out many secrets about cooking the summer sausages, but did reveal that the meat is smoked with only live oak because of its aroma. Beginning Saturday morning, the volunteers flock to Zion Lutheran Church and School to cut, grind, cube, season and smoke the sausages. On Sunday, the sausages are hung in a smokehouse and on Monday are served to the hungry thousands.

When asked about the unique flavor of their sausage, Micken laughed and answered, “Our recipe is not given out; it is for old-timer’s use only.” Micken’s own grandfather was the founder of Walburg. In the early 1880s Henry Doering settled there and opened a general store, adding a post office years later. Other Germans later immigrated to that area, such as her husband, Ray Micken, owner of Micken Motor Co. in Walburg. “It is a wonderful event,” Micken said. “We have people from all over the state to buy sausage and to buy plates. Some profit goes to the church and other profits go to the community.” Today, more than 4,500 people are served 12,500 pounds of smoked sausage within four hours on the first Monday of November. The homemade menu includes many German influences: summer and smoked sausage, mashed potatoes, sauerkraut, sweet potatoes, potato salad, coleslaw, green beans, bread and pickles. “It is wonderful to see the generous folk of Walburg come and serve good food to good people,” Micken said with a smile. Taylor isn’t only the home of the Mikeska family, it is the known as “The Heart of Texan Bar-B-Q,” according to their chamber of commerce. While the Mikeska family shares their rich Czech heritage, Taylor Meat Co. has risen in popularity by selling various meats from different ethnic backgrounds.

German and Czech Traditions In 1947, two brothers saw the rising popularity of barbecue in Central Texas and founded Taylor Meat Co. Since then, there have been more than 84 different types of smoked and summer sausages drawing from German and Czech influences. All recipes have been passed along since 1947, but new spins on old classics have become instant favorites among routine customers. Ron Ivy, president of R.L. Ivy Management and partner in Taylor Meat Co., described the ethnic smoked and summer sausages they sell. “Our summer sausage is called cervelat, which can be eaten cold or heated, mostly as finger food,” Ivy said. Cervelat (pronounced “serve-a-la”) stems from Swiss, French and German influence and is actually derived from the Latin word, “cerebellum,” for brain. Cervelat used to be made from the brains of pigs mixed with pork and beef, but that soon became unpopular. Taylor

Meat Co. uses pork rind, pork and beef with spices for flavoring. Two additionally popular sausage choices are liver ring, which is a German classic, and head cheese, which became popular around the Middle Ages in Europe. Liver Ring is made by chopping up the intestines of a pig, flavoring and smoking it, and hanging in a smokehouse, after which it can be served heated or cold. “We use pork liver, kidneys and pork tongue smoked over hickory wood,” Ivy said. “After it’s smoked and pulled, we case it in gelatin to set.” Head cheese is another summer sausage popular at Taylor’s Meat. Head cheese refers to using the head of the pig to make the meat of the sausage and the jelly found in the skull as a casing. Ivy said Taylor’s Meat uses the snout, ears and tongue of the pig for their head cheese. “We are primarily a German and Czech community, and our food matches the town’s culture,” Ivy said.