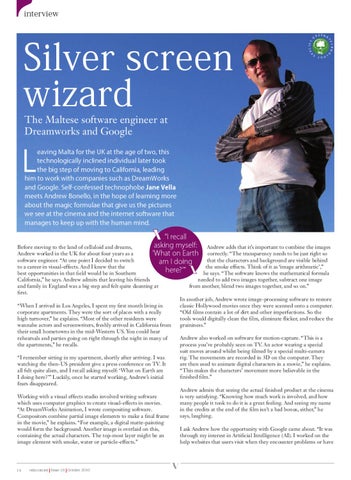 The Maltese software engineer at Dreamworks and Google

eaving Malta for the UK at the age of two, this technologically inclined individual later took the big step of moving to California, leading him to work with companies such as DreamWorks and Google. Self-confessed technophobe Jane Vella meets Andrew Bonello, in the hope of learning more about the magic formulae that give us the pictures we see at the cinema and the internet software that manages to keep up with the human mind.

“I recall asking myself: ‘What on Earth am I doing here?’”

Before moving to the land of celluloid and dreams, Andrew worked in the UK for about four years as a software engineer. “At one point I decided to switch to a career in visual-effects. And I knew that the best opportunities in that field would be in Southern California,” he says. Andrew admits that leaving his friends and family in England was a big step and felt quite daunting at first.

“When I arrived in Los Angeles, I spent my first month living in corporate apartments. They were the sort of places with a really high turnover,” he explains. “Most of the other residents were wannabe actors and screenwriters, freshly arrived in California from their small hometowns in the mid-Western US. You could hear rehearsals and parties going on right through the night in many of the apartments,” he recalls. “I remember sitting in my apartment, shortly after arriving. I was watching the then-US president give a press conference on TV. It all felt quite alien, and I recall asking myself: ‘What on Earth am I doing here?’” Luckily, once he started working, Andrew’s initial fears disappeared. Working with a visual effects studio involved writing software which uses computer graphics to create visual-effects in movies. “At DreamWorks Animation, I wrote compositing software. Compositors combine partial image elements to make a final frame in the movie,” he explains. “For example, a digital matte-painting would form the background. Another image is overlaid on this, containing the actual characters. The top-most layer might be an image element with smoke, water or particle-effects.”

Andrew adds that it’s important to combine the images correctly. “The transparency needs to be just right so that the characters and background are visible behind the smoke effects. Think of it as ‘image arithmetic’,” he says. “The software knows the mathematical formula needed to add two images together, subtract one image from another, blend two images together, and so on.”

In another job, Andrew wrote image-processing software to restore classic Hollywood movies once they were scanned onto a computer. “Old films contain a lot of dirt and other imperfections. So the tools would digitally clean the film, eliminate flicker, and reduce the graininess.” Andrew also worked on software for motion-capture. “This is a process you’ve probably seen on TV. An actor wearing a special suit moves around whilst being filmed by a special multi-camera rig. The movements are recorded in 3D on the computer. They are then used to animate digital characters in a movie,” he explains. “This makes the characters’ movement more believable in the finished film.” Andrew admits that seeing the actual finished product at the cinema is very satisfying. “Knowing how much work is involved, and how many people it took to do it is a great feeling. And seeing my name in the credits at the end of the film isn’t a bad bonus, either,” he says, laughing. I ask Andrew how the opportunity with Google came about. “It was through my interest in Artificial Intelligence (AI). I worked on the help websites that users visit when they encounter problems or have