From Our Chairman, Valerie Miles The Friends last met on 12 March; the following week our world of meetings, excursions, cinemas etc began to end. The ‘lockdown’ was beginning. I’d certainly heard this word before March 2020. I associated it with prison riots and temporary emergencies – not with my own quiet life. As Museum Friends we’re all interested in the past, and our time in lockdown will (soon, with any luck) become the past. It would be good to put together an account of how we’ve occupied our time since March. As a group, we’ve been kept together by John Turkington’s Zoom talks, but how have we coped as individuals? What has kept you going during these months? Do contact me, and help compile a piece of local history.

Mike Millward’s Silver Lining In 2016 I read glowing reviews of a book by Christopher de Hamel. I had met him at Sotheby’s years ago when we successfully bid for a medieval lectionary for the collection. He is now Librarian at Corpus Christi College, Cambridge. “Meetings with Remarkable Manuscripts” looked my sort of book but at £30, expensive. When lockdown struck, looking for something to read, I found a secondhand hardback copy on the wonderful “World of Books” website for £11, which turned out to be in brand new condition. It is brilliant with accessible, entertaining and beautifully illustrated descriptions of twelve medieval manuscripts beginning with the Gospel Book brought to England by St Augustine of Canterbury in 597 and now in the author’s care in Cambridge. Without lockdown I would still be putting off my purchase.

Talking through Lockdown I have been giving a talk every week ever since the virus hit us, cutting us off from the Museum. The talks are broadcast over the now ubiquitous Zoom with participants from different Friends groups as well as our own over the North West, even stretching to the Scottish Highlands. Numbers watching vary, as many as 65, but usually 25-40. There were some difficulties at first with a couple of talks being postponed through what I like to call technical problems rather than my ignorance but all is going well at the moment and I intend to keep going as long as anyone is there to listen or until the plague passes from us.

I am full of admiration for Mike Waters who produces the posters for me, often with very sketchy information. They are full of wit ,brio and invention. I don’t know how he keeps it up week in week out.

The Spanish ‘Flu 1918 In 2008 I spent a day reading the Blackburn Times newspapers from a 100 years before. I can remember being shaken by the experience. One hundred years later, it was frightening; at the time, it must have been terrifying. Reading the school logbooks from the time was sobering. On one page, a school noted a visit by an ex-pupil, then training to be a teacher. On the following page, it recorded her death a week later. Today young people are largely immune to the worst effects; in 1918, they were the virus’ main target. Tragically, many soldiers returned home, having survived the war, only to die of the ‘flu. In Darwen, the Coop Manager lost both his young daughters within minutes of each other. Another family was all but wiped out – mother, father and son were all buried together while their daughter fought the illness at home.

Lockdown has meant more Ì me computer bound, keeping up with the news and iPlayer. However, I can now Zoom to join in with group discussions. The highlight, of course, became John Turkington’s weekly fascinaÌ ng talk, but why doesn’t my microphone unmute at the end? Isn’t technology wonderful? I haven’t been able to visit my mother’s care home since March. I discovered that I can Skype her, but she can only hear me if the carer puts the iPad to her ear. Isn’t technology wonderful? When iniÌ al travel restricÌ ons were eased, I could return to the gardening group at Turton Tower for exercise. We’ve done a lot this year. The gardens, woodland paths and new kiosk for snacks have been extra busy, but you can always find a quiet spot. Isn’t nature the best? R.A.H. Robin is a Friend of Turton Tower

Today it is older people, those with underlying health problems who are vulnerable; in 1918 people who were ill were also vulnerable, and the workhouse and hospitals were closed to visitors. By early 1919, the people had endured three waves of the virus, each worse than the last, and they spoke fearfully about the ‘next wave’ but it never came. Viruses mutate and it is to their advantage if they become less lethal; a virus that has killed off all its potential hosts is a doomed virus, and so that strain of the virus became less dangerous. We can only hope. Steve Irwin (Museum staff) 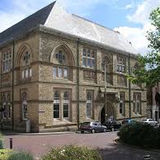