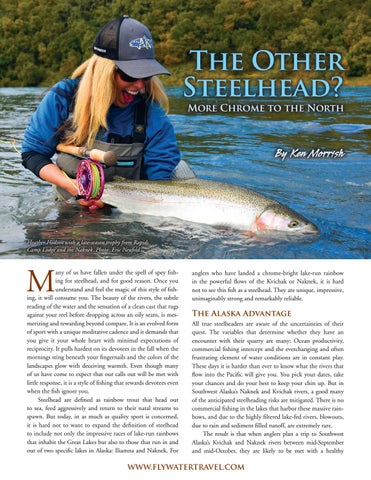 Heather Hodson with a late-season trophy from Rapids Camp Lodge and the Naknek. Photo: Eric Neufeld

any of us have fallen under the spell of spey fishing for steelhead, and for good reason. Once you understand and feel the magic of this style of fishing, it will consume you. The beauty of the rivers, the subtle reading of the water and the sensation of a clean cast that tugs against your reel before dropping across an oily seam, is mesmerizing and rewarding beyond compare. It is an evolved form of sport with a unique meditative cadence and it demands that you give it your whole heart with minimal expectations of reciprocity. It pulls hardest on its devotees in the fall when the mornings sting beneath your fingernails and the colors of the landscapes glow with deceiving warmth. Even though many of us have come to expect that our calls out will be met with little response, it is a style of fishing that rewards devotees even when the fish ignore you. Steelhead are defined as rainbow trout that head out to sea, feed aggressively and return to their natal streams to spawn. But today, in as much as quality sport is concerned, it is hard not to want to expand the definition of steelhead to include not only the impressive races of lake-run rainbows that inhabit the Great Lakes but also to those that run in and out of two specific lakes in Alaska: Iliamna and Naknek. For

anglers who have landed a chrome-bright lake-run rainbow in the powerful flows of the Kvichak or Naknek, it is hard not to see this fish as a steelhead. They are unique, impressive, unimaginably strong and remarkably reliable.

The Alaska Advantage All true steelheaders are aware of the uncertainties of their quest. The variables that determine whether they have an encounter with their quarry are many: Ocean productivity, commercial fishing intercept and the everchanging and often frustrating element of water conditions are in constant play. These days it is harder than ever to know what the rivers that flow into the Pacific will give you. You pick your dates, take your chances and do your best to keep your chin up. But in Southwest Alaskaâ&#x20AC;&#x2122;s Naknek and Kvichak rivers, a good many of the anticipated steelheading risks are mitigated. There is no commercial fishing in the lakes that harbor these massive rainbows, and due to the highly filtered lake-fed rivers, blowouts, due to rain and sediment filled runoff, are extremely rare. The result is that when anglers plan a trip to Southwest Alaskaâ&#x20AC;&#x2122;s Kvichak and Naknek rivers between mid-September and mid-October, they are likely to be met with a healthy

THE OTHER STEELHEAD population of super-charged, chrome-bright fish that desperately want to eat large flies before winter sets in. Moreover, these fish, which typically run between 24 and 34 inches, are widely considered stronger inch per inch than the average steelhead, and almost invariably run deep into the backing. Additionally, jetboat run times to the targeted waters are short, and guests that prefer not to wade have ample opportunities to fish form the boat. On a typical day, anglers will have roughly a half a dozen opportunities, and when you bring one of these trophies to hand you would be hard pressed to not see it as one of the most beautiful steelhead you have ever seen. Is it a steelhead? Well not exactly, but then again does it really matter if it is big, bright, strong and anadromous in its own way? While there are several great operations from which you can target these remarkable fall fish, we have selected two standouts. Additionally, we have worked with them to set up special high-value packages, exclusively for Fly Water Travel’s guests, that will put you on the best waters, without getting in an aircraft, irrespective of the weather.

Rapids Camp Lodge Situated on the banks of the Naknek River, Rapids Camp Lodge is a popular full-service fly-out lodge that has created a special late-season program for anglers intent on targeting the biggest and brightest lake-run fish during the late season. This program will focus exclusively on their world-famous home waters and

enable eight dedicated swing anglers to target some of the state’s largest fish without incurring the cost of a full fly-out program. The lodge features eight comfortable double-occupancy rooms with private baths, a large friendly bar, a gourmet chef, a workout room and all the needed waders and tackle their guests require. When it comes to creature comforts, a high value and a chance to tangle with some of the world’s largest and hottest rainbows, this is an opportunity like no other. Dates: Sept. 20-27, Sept. 27-Oct. 4, Oct. 4-11 Rate: $9,495 per person for a 7 night/6 day package

Igiugig Lodge With 30 years of guiding experience in the region, Brad Waitman has created one of the most unique and intimate operations in the state. Catering to only six guests per week, Brad’s program focuses on their trophy home waters, the Kvichak, in additiom to two fly-outs. One of the single greatest stretches of swing water in the state is a short walk from the lodge’s front door where Lake Iliamna necks down and becomes the Kvichak. This intimate no-frills lodge is a Fly Water Travel favorite, and with Brad’s vast experience and drive, this special late-season jetboat program will deliver astonishing rainbows to all that visit. This is not only one of the greatest values in Alaska, but also a shining example of what a hands-on owner-operated lodge can be. Dates: Sept. 28-Oct 5, Oct. 5-12 Rate: $6,800 per person for a 7 night/6 day package

Many of us have fallen under the spell of spey fishing for steelhead, and for good reason. Once you understand and feel the magic of this st...

Many of us have fallen under the spell of spey fishing for steelhead, and for good reason. Once you understand and feel the magic of this st...