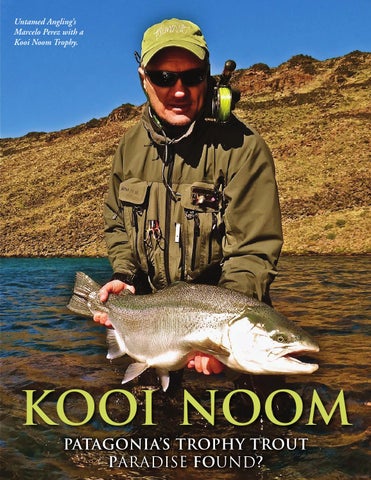 lex and Nico Trochine had been whispering word of this place to us for some time. There were no lake, river or estancia names attached; there were no GPS coordinates, there was only hushed excitement, promise and potential. The deal was not sealed, the rights to the sprawling stream and lake-studded landscape were not secured and accordingly mum was the word. It was too important to blab about. It was an opportunity of

magnitude for the Argentine “Twins,” one that they wanted and one that we felt they deserved and could clearly handle. Both Brian and I had fished with the twins independently starting when they were about 18 years old on the Rio Grande. And while we fish with (and sometimes forget) a lot of guides, these two were always etched in our minds as exemplary… young, skilled, articulate, passionate, and adventuresome. Others saw the same in them and they were hired to guide in

“...there was only hushed excitement, promise and potential.”

KOOI NOOM Iceland, and later to manage a remote and technical sea trout program known as Far End Rivers. They have guided throughout Argentina as well as outfitting their own exploratory wilderness float trips in some of Bolivia’s most remote regions. In a nutshell they are studs, but modest ones. But back to this place: Kooi Noom. It is special to say the least. At its core the operation is a sprawling estancia high in the western Patagonian Steppe. It is blessed with three scud rich lakes, two rugged interconnected freestone rivers, and numerous intimate tributary streams all of which hold large fish. Moreover these fat fast growing wild rainbows are free to move about between the lakes and rivers and streams at will, making this one of the most remarkable moving water trophy fisheries we have seen. Here we anticipate 70% of an angler’s time to spent fishing moving water, some of which is really rough and tumble big river pocket water complimented by smaller meandering spring creek like tributaries that feed into the two main lakes.

Additionally, the majority of your fishing time will be spent sight fishing to very significant fish. How significant? Well let’s just say that there are lots between five and ten pounds, a good number that will go 15 and few that top 20. With the introduction of trout to this complex being in the near past, we have no idea how big these fish might get but we do know that to date, the average size has been on an exceedingly steep growth curve from year to year.

The Program 2014 will mark the first season for Kooi Noom. We are excited by the potential and the fact that the Trochines have partnered with Untamed Angling (owners of Tsimane Lodge and La Zona). Alex and Nico will be the on-site managers and the experts at Untamed Angling will help them with marketing, logistics and fine tuning the fishing program. At the understated estancia anglers enjoy double occupancy rooms with private baths, thoughtfully prepared meals and cozy common area for drinks. This

“we have no idea how big these fish might get but we do know that to date, the average size has been on an exceedingly steep growth curve from year to year.”

not a fancy place but it is practical and comfortable. Each day guest head by vehicle to their allotted beats and at times employ boats to reach some of the more remote tributaries feeding into the lakes. Typically a split day schedule with lunch at the lodge enables anglers to fish during

2014 will be Kooi Noom’s opening season. Guides, Owners, and Managers Alex and Nico have their sights set on showing guests a trip of a lifetime.

the most productive times of day and enjoy a siesta mid day after a big meal. Anglers will rotate through the various beats throughout the course of their stay and see a wonderful variety of water. Additionally, all of the waters fished are at the exclusive disposal of Kooi Noom guests.

How to Get There To get to Kooi Noom you will need to make travel arrangements to Buenos Aires, Argentina and then on to Calafate. You will be met by members of the Kooi Noon staff in Calafate and driven to the lodge, approximately four hours away.