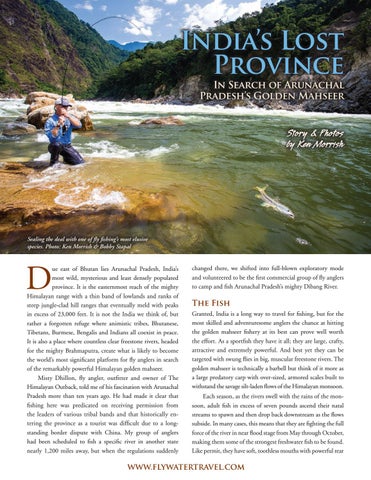 Sealing the deal with one of fly fishing’s most elusive species. Photo: Ken Morrish & Bobby Stapal

ue east of Bhutan lies Arunachal Pradesh, India’s most wild, mysterious and least densely populated province. It is the easternmost reach of the mighty Himalayan range with a thin band of lowlands and ranks of steep jungle-clad hill ranges that eventually meld with peaks in excess of 23,000 feet. It is not the India we think of, but rather a forgotten refuge where animistic tribes, Bhutanese, Tibetans, Burmese, Bengalis and Indians all coexist in peace. It is also a place where countless clear freestone rivers, headed for the mighty Brahmaputra, create what is likely to become the world’s most significant platform for fly anglers in search of the remarkably powerful Himalayan golden mahseer. Misty Dhillon, fly angler, outfitter and owner of The Himalayan Outback, told me of his fascination with Arunachal Pradesh more than ten years ago. He had made it clear that fishing here was predicated on receiving permission from the leaders of various tribal bands and that historically entering the province as a tourist was difficult due to a longstanding border dispute with China. My group of anglers had been scheduled to fish a specific river in another state nearly 1,200 miles away, but when the regulations suddenly

changed there, we shifted into full-blown exploratory mode and volunteered to be the first commercial group of fly anglers to camp and fish Arunachal Pradesh’s mighty Dibang River.

The Fish Granted, India is a long way to travel for fishing, but for the most skilled and adventuresome anglers the chance at hitting the golden mahseer fishery at its best can prove well worth the effort. As a sportfish they have it all; they are large, crafty, attractive and extremely powerful. And best yet they can be targeted with swung flies in big, muscular freestone rivers. The golden mahseer is technically a barbell but think of it more as a large predatory carp with over-sized, armored scales built to withstand the savage silt-laden flows of the Himalayan monsoon. Each season, as the rivers swell with the rains of the monsoon, adult fish in excess of seven pounds ascend their natal streams to spawn and then drop back downstream as the flows subside. In many cases, this means that they are fighting the full force of the river in near flood stage from May through October, making them some of the strongest freshwater fish to be found. Like permit, they have soft, toothless mouths with powerful rear

INDIA’S LOST PROVINCE crushers. They also have exceedingly well-developed lateral lines, making them rather unforgiving of sloppy approaches or presentations, and they have remarkable suction-striking abilities that enable them to suck in prey from some distance away. I think of them as embodying the challenge of permit, the appeal of steelhead and the strength/size appeal of king salmon. As fly anglers, we view a fish of over 10 pounds as a good fish and a fish over 20 pounds as a big fish. Bait anglers consider fish over 30 pounds as large, and a good many have been landed in excess of 60 and even 70 pounds.

had special senses in relation to these fish. Over time, Bobby became Misty’s head guide and today he is the world’s foremost authority on catching mahseer on a fly. Bobby has likely caught more mahseer on a fly than anyone else as well as the three largest mahseer ever caught on a fly, all of which were over 50 pounds! Guiding is not a game for Bobby, it is serious business. He rigs gear like a seasoned tarpon guide, he stalks fish like a true hunter and he invariably fishes his guests into pitch darkness. Together he and Misty have amassed an excellent team, all of whom speak excellent English.

Misty Dhillon is the father of fly fishing for mahseer in India. His is an appealing, articulate, enthusiastic and regal, princelike character. He learned everything he knows about mahseer fly fishing the hard way, through trial and error as well as from coaching and observing his many western clients. Ten years ago, Misty had the good sense to hire Bobby Stapal, an eager 18-year old that grew up on the banks of a mahseer river. There was always something special about Bobby, it was as though he

The Himalayan Outback builds one heck of a camp. While they finished clearing and setting up our exploratory camp mere hours before we arrived, none of us were the wiser. Embarrassing as it may be, there were 14 staff members for our party of six, a fair number of whom we never saw. We had comfortable, well-ventilated tents with heavy-duty cots, mattresses, quality pillows and cotton comforters. There were three outhouse tents for the six of us and one shower tent with

“There was always something special about Bobby, it was as though he had special senses in relation to these fish. Over time, Bobby became Misty’s head guide and today he is the world’s foremost authority on catching mahseer on a fly.”

provided towels. There was a rod rack fashioned from the rods with 300-grain sinking heads and weighted flies as well as jungle, an open-walled dining tent with great canvas and leather with 7 and 8-weight spey rods with heavy tips and streamers. folding chairs, a myriad of kerosene lanterns and a wonderful Things being as they were, we were slightly ahead of the mahfire circle with a little bar and beer cooler close seer’s peak downstream migration and the quality sight fishing at hand. Meals were beyond compare. Misty that Bobby had experienced the season before. On our has had the same head chef for ten years and last day we floated out of the foothills into the what he can pull off without electricity, conventional flatlands and were pleased with our catch refrigeration or plumbing is truly amazing. Each dinner rate, the water type and the discernably had five different Indian dishes (spiced appropriately for a westless challenging terrain. Likely this float ern audience) and the level of cleanliness was the will become a staple moving forward. best I have ever seen in a remote location. None of Additionally, there is a good chance that B r a s s Tu b e us had so much as a stomach rumble. Breakfasts they will set up smaller spike camps further up the Sculpin were equally impressive with porridge, toast, eggs Dibang. Misty and his crew have the resources and to order, bacon and assorted sides like potatoes and pancakes. wherewithal to remain flexible, and guests who can do the same are prime candidates for this trip. Fishing Program Masheer are a noble and challenging fish. Those who dismiss them as a common carp, not worthy of a pilgrimage During our week at the Dibang Base Camp we typically headed to India, likely have no real experience with them. They are out in groups of two or three anglers with at least two guides. mysterious, challenging and one can travel a great distance One guide might be a senior guide and another, less experiand not be rewarded with landing one. Yet it is equally true enced, was there to help as needed. We did a lot of walk and that the resource is vibrant and that the rivers of Arunachal wade fishing, most often in very challenging terrain that conPradesh are big, burly and wild and that, when all the factors sisted of large and, at times, unstable rock. We did a lot of rock align, a good week here, or even a few fish of significance, can hopping, wet wading between perches and climbing around on make this trip a true angling adventure of a lifetime. steep embankments. We fished with both single hand 8-weight

Travel: Guests fly from New Delhi to Assam (3 hours) and then take a 5-hour drive to a lodge near the camp. The following day guests drive 3.5 hours into camp. Season: October through April with prime windows of November/December and February 15th through April 30th Capacity: Six anglers Essential Tackle: A 13-foot 8-weight spey rod with a Skagit head and a 9-foot 8-weight rod with a 300-grain integrated shooting head Top Flies: Heavy tube flies that resemble sculpin and baitfish Rates: $4,800-$5,400 per person for a 9 night/6 day package

Top: Local girl in tea plantation, rafting the lower Dibang, dinner in Dibang base camp. Middle: Nils Rinaldi spey casting on the mighty DiBang. Bottom: Images from the Dibang and the Himalayan Outback staff with Misty Dhillon and Bobby Stapal on the right. Photos: Ken Morrish 1-800 -552-2729

Due east of Bhutan lies Arunachal Pradesh, India’s most wild, mysterious and least densely populated province. It is the easternmost reach o...

Due east of Bhutan lies Arunachal Pradesh, India’s most wild, mysterious and least densely populated province. It is the easternmost reach o...