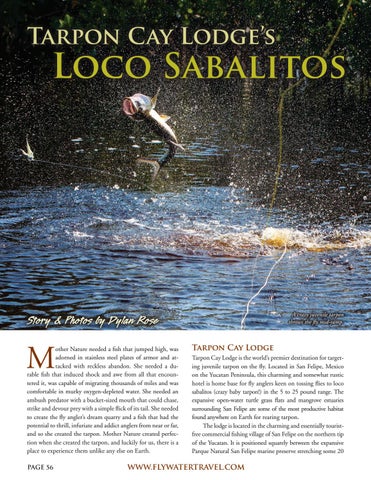 other Nature needed a fish that jumped high, was adorned in stainless steel plates of armor and attacked with reckless abandon. She needed a durable fish that induced shock and awe from all that encountered it, was capable of migrating thousands of miles and was comfortable in murky oxygen-depleted water. She needed an ambush predator with a bucket-sized mouth that could chase, strike and devour prey with a simple flick of its tail. She needed to create the fly angler’s dream quarry and a fish that had the potential to thrill, infuriate and addict anglers from near or far, and so she created the tarpon. Mother Nature created perfection when she created the tarpon, and luckily for us, there is a place to experience them unlike any else on Earth. PAGE 56

Tarpon Cay Lodge Tarpon Cay Lodge is the world’s premier destination for targeting juvenile tarpon on the fly. Located in San Felipe, Mexico on the Yucatan Peninsula, this charming and somewhat rustic hotel is home base for fly anglers keen on tossing flies to loco sabalitos (crazy baby tarpon!) in the 5 to 25 pound range. The expansive open-water turtle grass flats and mangrove estuaries surrounding San Felipe are some of the most productive habitat found anywhere on Earth for rearing tarpon. The lodge is located in the charming and essentially touristfree commercial fishing village of San Felipe on the northern tip of the Yucatan. It is positioned squarely between the expansive Parque Natural San Felipe marine preserve stretching some 20

TARPON CAY LODGEâ&#x20AC;&#x2122;S LOCO SABALITOS miles to the west and the Rio Lagartos preserve stretching 30 miles to the east. Cumulatively, these conservation corridors ensure that miles upon miles of prime tarpon rearing grounds are protected in their entirety. Tarpon Cay Lodge is actually a small hotel called the Hotel San Felipe. Rooms at the hotel are not over-the-top in terms of luxury but instead offer simple surroundings with clean, comfortable and air-conditioned rooms and common areas. Rooms feature private bathrooms, ocean views and plenty of hot water. Adding to the charm of Tarpon Cay is on-site manager Beto, who remains one of the most popular hosts we have ever come across. His pleasant and good-natured humor, attention to detail and unfailing desire to help you have a great time keeps anglers coming back year after year.

The Silver King Tarpon are fascinating and prehistoric creatures that are capable of breathing air in low oxygenated water. Scientists continue to research and study all that they can in an attempt to un-

derstand these incredible fish. The majority of baby tarpon grow and begin to mature in the estuarine ecosystems of the Gulf of Mexico, where many juveniles take refuge in the vast mangrove-lined coastlines of the Yucatan. These babies develop along these abundant mangrove shorelines for the first seven or eight years of their life, typically growing to an average size of about 30 to 35 pounds during this time. Males generally stay smaller than females. As they continue to mature, grow in size and build confidence they begin seeking larger prey offshore. Typically fish above 30 pound become migratory in nature and less apt to inhabit the nearshore mangrove edges of the Yucatan. The main portion of the migration is thought to begin somewhere near Panama (or even further south) and extends north through Guatemala, Belize, Mexico and the Gulf of Mexico to the Florida Keys. Females are thought to spawn in deeper open water environments where they may produce millions of minute larvae that eventually are washed back towards the mangroves where the cycle repeats.

The author with a perfect TCL tarpon.

Few things will make you happier as a traveling angler then the split shift fishing program at Tarpon Cay Lodge. Each The fishing program at Tarpon Cay allows two anglers to fish morning the fishing day begins around 6am and extends to per boat with a single guide. The guide team is a seasoned crew about 11am. After the morning session, anglers have an opporof experienced tarpon hunters, deeply familiar with their local tunity take in a fabulous home-cooked Mexican lunch back at waters. All of them were born and raised right in San Felipe. the lodge, have a siesta, tie flies and prep tackle for the evening They are a highly skilled and savvy team with expert knowlsession which kicks off by about 3pm. Anglers have the opporedge of the area and the specific needs of fly fishing clientele. tunity to fish through the evening sunset Tarpon Cay is a small operation that only places three and typically arrive back at the lodge boats on the water each day, keeping the around 7pm for cocktails and dinner. fishery fresh and unpressured all season It’s easy for anglers to assume that long. Anglers are able to fish the entire because they are targeting “babies,” the catchexpanse of available terrain without worry ing will be easy. Sometimes, this is absolutely of other operations infringing on their fishing zone, Tequila Popper the truth, but more realistically juvenile tarpon which is a huge benefit and rare in the scope of availcan be very challenging. Even though they may be smaller able saltwater fishing destinations. then their adult migrating counterparts they are still tarpon, Anglers are typically outfitted with fast-action 8 and and at times can become very sensitive to their changing envi9-weight rods, high-quality saltwater reels and floating fly lines. ronment. Whether it’s due to increased rain, the moon, wind, The black golden hue of a tarpon’s back blends perfectly with a changing barometer, or other unknown factors the fish can at the color of the bottom in this area, making it nearly impossible times become quite finicky. At other times, a well-presented fly to see them through the water. The guides are instrumental for falling anywhere within a 30-foot radius will be greedily inhaled reading the surface of the water for telltale signs of fish moving and instantly attacked. Every day and every trip is different with underneath. At times, schools of moving fish from a half dozen tarpon, further adding to the joy of targeting these fish. to more than 200 can be spotted. At other times you may cast to a single rolling fish, only to find that you spooked a school of The Launch Factor 40 fish ten feet from the boat. Sometimes blind casts or explorExcellent fly casters will excel in this fishery, and owner Marco atory casts are made in likely areas to find fish, especially if they Ruz is fond of letting those anglers keen on visiting the lodge do not seem to be rolling. Depending on the tides fish can be know that this is a “caster’s game.” The better your accuracy, found cruising open-water flats or at the mouths of dozens of speed and distance, the better your chances are of hooking mangrove-lined creeks that drain the area. multitudes of fish. It’s more a factor of how fast one can deliver Tarpon Cay’s 18-foot pangas are specifically designed with the fly then it is extreme distance. An angler that can reach fly fishing in mind and are extremely stable fishing platforms. 70 feet in three or less false casts with a powerful double-haul Smaller size 2-2/0 tarpon flies in natural colors that are dewill have the best access to traveling fish cruising the flats. signed to imitate baitfish or shrimp work best. Fishing surface Tarpon are highly sensitive, so at times the guides will attempt and waking patterns can be incredibly exciting and addicting to keep the boat quiet by keeping their distance from the fish. while other times a subsurface baitfish imitation might do the This means that the angler may be asked to reach great lengths trick. Neutrally buoyant fly patterns tied with spun deer hair quickly and thus good casters will be rewarded with higher or bits of foam smoothly glide over the vegetation without catch rates. hanging up, and whether you’re fishing on top or below the Tarpon have brutally hard mouths and can repel even the surface, a well-positioned cast to feeding fish almost always highest quality and sharpest hooks with amazing proficiency. draws attention.

“The expansive open-water turtle grass flats and mangrove estuaries surrounding San Felipe are some of the most productive habitat found anywhere on Earth for rearing tarpon.” PAGE 58

“The black golden hue of a tarpon’s back blends perfectly with the color of the bottom in this area, making it nearly impossible to see them through the water. At times, schools of moving fish from a half dozen to more than 200 can be spotted. At other times you may cast to a single rolling fish, only to find that you spooked a school of 40 fish ten feet from the boat.”

Often, anglers need to remain patient as they learn the insand-outs of properly strip striking on a thrashing 20-pound tarpon. There is a sharp learning curve that comes with developing the skill of how to set the hook, and it can take a couple of days of missed opportunities to get the hang of it. “Bowing to the king”, or the “prince” in this case, is the practice of giving line to a jumping and thrashing fish in an effort to avoid the leader being cut by the tarpon’s sharp mouth and gill plates. Patience to get it right is required!

When to Go? Baby tarpon are available at Tarpon Cay year-round; however, late spring through summer offers the best opportunity for stable weather, lighter winds and the most consistent action. As the mercury rises and calm winds settle in by late May, the season kicks in to high gear. Throughout the summer, warm and regular rainfall keeps winds calm and the tarpon actively feeding. As the temperatures rise and oxygen content on the flats goes down, the tarpon stay comfortable by rolling and Tarpon Cay breathing air, which gives us great chances to spot them, particularly in the cooler morning and evening hours. As fall approaches, opportunities for larger migratory fish can sometimes yield truly out-of-this-world tarpon angling. Long runs from the lodge to the migratory fishing grounds are possible in late August and September for those

interested in trying to find migrating fish of 100 pounds or larger. Finding targetable numbers of migrating adults is always a bit of crapshoot, but it’s certainly nice to have the option during the fall months and all it takes is one fish to have a truly memorable encounter. As the winter months settle in, chances increase for cold weather from the North, which can greatly inhibit fishing and so the season typically winds down with the arrival of October.

The Final Bow The northern Yucatan’s beauty will steal your breath away and the bountiful opportunities to chase the Silver Prince at Tarpon Cay are a fly angler’s dream. The casual atmosphere, friendly staff, great local food, skilled guides and insanely productive tarpon fishery make Tarpon Cay Lodge our favorite spot in the world to chase baby tarpon. The entire tarpon life cycle can be encountered in a single trip to San Felipe, from 6-inch babies hiding in the mangrove roots to full-fledged 100-pound migrating adults (in season). This Lodge Special fact alone makes Tarpon Cay unique in the landscape of the world’s tarpon destinations. Coupled with fantastic guides, one of the best onsite hosts we’ve ever seen, and the heart-pounding thrill of a leaping tarpon on the end of your line and it’s impossible to see how a trip to Tarpon Cay shouldn’t be the very next destination on your saltwater hit list.

Top: A loco sabalito, sunset from the lodge. Middle: Heading out. Bottom: A simple bright room at TCL, an awesome group of guys.

Mother Nature needed a fish that jumped high, was adorned in stainless steel plates of armor and attacked with reckless abandon. She needed...

Mother Nature needed a fish that jumped high, was adorned in stainless steel plates of armor and attacked with reckless abandon. She needed...