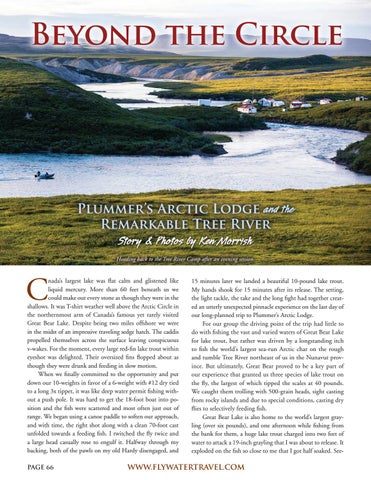 Plummer’s Arctic Lodge and the Remarkable Tree River Story & Photos by Ken Morrish Heading back to the Tree River Camp after an evening session.

nada’s largest lake was flat calm and glistened like liquid mercury. More than 60 feet beneath us we could make out every stone as though they were in the shallows. It was T-shirt weather well above the Arctic Circle in the northernmost arm of Canada’s famous yet rarely visited Great Bear Lake. Despite being two miles offshore we were in the midst of an impressive traveling sedge hatch. The caddis propelled themselves across the surface leaving conspicuous v-wakes. For the moment, every large red-fin lake trout within eyeshot was delighted. Their oversized fins flopped about as though they were drunk and feeding in slow motion.  When we finally committed to the opportunity and put down our 10-weights in favor of a 6-weight with #12 dry tied to a long 3x tippet, it was like deep water permit fishing without a push pole. It was hard to get the 18-foot boat into position and the fish were scattered and most often just out of range. We began using a canoe paddle to soften our approach, and with time, the right shot along with a clean 70-foot cast unfolded towards a feeding fish. I twitched the fly twice and a large head casually rose to engulf it. Halfway through my backing, both of the pawls on my old Hardy disengaged, and PAGE 66

15 minutes later we landed a beautiful 10-pound lake trout. My hands shook for 15 minutes after its release. The setting, the light tackle, the take and the long fight had together created an utterly unexpected pinnacle experience on the last day of our long-planned trip to Plummer’s Arctic Lodge. For our group the driving point of the trip had little to do with fishing the vast and varied waters of Great Bear Lake for lake trout, but rather was driven by a longstanding itch to fish the world’s largest sea-run Arctic char on the rough and tumble Tree River northeast of us in the Nunavut province. But ultimately, Great Bear proved to be a key part of our experience that granted us three species of lake trout on the fly, the largest of which tipped the scales at 40 pounds. We caught them trolling with 500-grain heads, sight casting from rocky islands and due to special conditions, casting dry flies to selectively feeding fish. Great Bear Lake is also home to the world’s largest grayling (over six pounds), and one afternoon while fishing from the bank for them, a huge lake trout charged into two feet of water to attack a 19-inch grayling that I was about to release. It exploded on the fish so close to me that I got half soaked. See-

BEYOND THE CIRCLE ing this as an opportunity, I spent the next hour on the bank with my 10-weight and a big fly and got five respectable shots at the 30-pound beast as it cruised its beat back and forth along the steep drop off. While I never closed the deal, it was one more experience that converted me from a lake trout fly fishing skeptic to an outright enthusiast and served as another reminder for me to take what travels brings with an open and appreciative mind.

The Plummer’s Program If you want to fish the Tree River, there is one and only one way to get there. That is through Plummer’s Arctic Lodge, arguably the oldest and most established lodge in the Northwest Territories. Less than 300 anglers fish the prolific trophy waters of Great Bear Lake each season. Their largest lake trout to date tipped the scale at over 72 pounds. The vast majority of Plummer’s clients are conventional anglers who happily troll banana-sized flat fish and massive spoons from the quiet comfort of 18-foot Lunds. Guests can fish out of the lodge all week or splurge and fly out in one of two turbine Otters to more distant reaches of the lake that rarely if ever see a fly or lure. Catch rates tend to be high and the fish tend to be large, and among the lake trout guide community Plummer’s is considered the absolute end of the rainbow. Long after their best guides officially “move on,” many come back for cameo work weeks because Great Bear is one of those places that deep

down inside they wish they never had to leave. While the lodge can take as many as 45 guests per week, they typically run with 35 anglers, some of which take advantage of flying out to the Tree River for a short visit. For parties of six serious fly anglers we make special arrangements for them to spend as many as three nights at the Tree River camp, giving them a legitimate and focused crack at this impressive river and its massive char. At the end of the season, there is also a trip that offers guests the chance to spend five days at the Tree River Camp without visiting Plummer’s main lodge.

The Tree River Camp To reach the Tree River, anglers fly nearly two hours northeast of Great Bear Lake across a vast pond-splattered wilderness to where the Tree meets the Arctic Ocean. Plummer’s tent camp is located roughly five miles inland from the sea where the frothing rapids of the upper river meet the broad slow-flowing reaches of the lower river. The camp, with its inviting red metal roofs, consists of four large guest tents, a shower building, a main kitchen/dining building overlooking the river, guide tents and several outhouses scattered about. For those who don’t need anything fancy its setting and simplicity make it darn near perfect. The Tree flows clear and hard. After draining a large lake it necks down and thunders over an impassible 70-foot falls. For its huge migratory char, some of which exceed 30 pounds,

“If you want to fish the Tree River there is one and only one way to get there. That is through Plummer’s Arctic Lodge, arguably the oldest and most established lodge in the Northwest Territories.”

this is the end of the road. Char enter the river beginning in late June with their numbers increasing through August. The majority of these fish spawn in August and September and then overwinter in the river. As with most anadromous gamefish, the early fish are bright and grabby and the more time they spend in freshwater, the more colored and fickle they become. Deciding when to visit is a tossup for most anglers. Come in July and the catch rates might be rather high with anglers hooking or landing multiple fish in excess of ten pounds per day. Come in August and you might sight fish and catch the world’s most beautifully colored gamefish.

Fishing Program While fly fishing is not the mainstay at Plummer’s, they have a good many guides who are into it and they are most often assigned to the anglers wanting to spend multiple days on the Tree. Typically fly anglers head upstream on foot each morning with their guide. Most often they will cross the river by boat and hike up the main trail on the opposite side or alternatively remain on the more rugged camp side of the river. While spey anglers who can cast a long line enjoy fishing some of the larger pools immediately above and beneath camp, the vast majority of the fly fishing focuses on the mile and a half of fast water above camp that terminates at the upper falls. Taking fish from these fast and furious waters is interdisciplinary to say the least. Pocket water skills, sight fishing skills and the ability to cast and strip heavily weighted streamers all come into play. While there are a few places

on the upper river where spey rods are handy, a solid single hand 8-weight rod is the most practical all-around tool for the Tree. There are lots of spots where anglers cast from rocks on the bank, as well specific situations where anglers will need to sneak up on specific holding lies and make their first cast count. Due to the clarity of the water, these fish spook easily. Additionally these char tend to be chasers, so stripping streamers and keeping them active works well in many of the key pools and pockets. Last but not least, having sturdy walking legs and good balance is a big bonus for those wanting to get the most out of the Tree. Once hooked, these fish can be very hard to handle. More often than not they will bolt for the fast water, which is always near at hand. If they reach it you will see a lot of backing in a hurry. If you are fast and agile you might get even with your fish and land it but more often than not, it will win. The best strategy is to use heavy tippet and do everything within your power to keep your fish within the pool or pocket once hooked. All said and done, a trip to Plummer’s is a must for anglers that want to experience some of the more extreme and unique elements that our sport has to offer. Great Bear with its enormous size, incredible clarity, and huge lakers is for many worth the trip all on its own. When you add in the Tree River with its incredibly scenic wilderness setting, aggressive pocket water, and its challenging and unspeakably gorgeous sea run char, you will be happy that you made the effort to reach the riches that lie beyond the Arctic Circle.

Travel: Anglers will fly to Yellowknife, Northwest Territories and overnight before taking a charter jet flight to Plummer’s Lodge. Anglers heading on to the Tree River will fly in turbine Otter northeast to Coronation Bay. Season: July through August Capacity: 35 anglers at the main lodge with 6 to 12 anglers at the Tree Camp Essential Tackle: A 10-weight with 500-grain sinking line and an 8-weight with floating line Top Flies: Dolly Llamas in assorted colors, Clouser minnows in assorted colors 2017 Rates: $5,245-$6,790 depending on package

Top: Fishing aggressive pocket water on the upper Tree River, a bright char fresh from the sea. Middle: Paul Imperia with a beautiful red fin lake trout from Great Bear Lake. In the right conditions these fish can be caught on dry flies. Bottom: Plummerâ&#x20AC;&#x2122;s Lodge on Great Bear Lake, fishing beneath upper falls on the Tree.

Beyond the Circle - Plummer's Arctic Lodge and the Remarkable Tree River

If you want to fish the Tree River, there is one and only one way to get there. That is through Plummer’s Arctic Lodge, arguably the oldest...

Beyond the Circle - Plummer's Arctic Lodge and the Remarkable Tree River

If you want to fish the Tree River, there is one and only one way to get there. That is through Plummer’s Arctic Lodge, arguably the oldest...