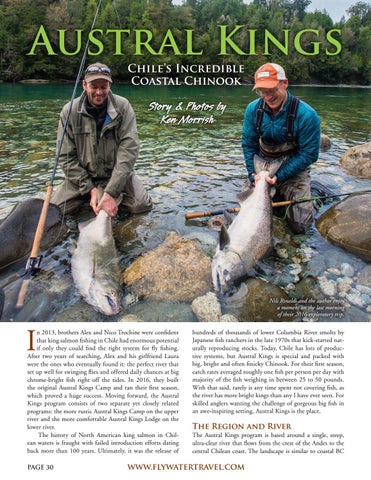 Nils Rinaldi and the author enjoy a moment on the last morning of their 2016 exploratory trip.

n 2013, brothers Alex and Nico Trochine were confident that king salmon fishing in Chile had enormous potential if only they could find the right system for fly fishing. After two years of searching, Alex and his girlfriend Laura were the ones who eventually found it: the perfect river that set up well for swinging flies and offered daily chances at big chrome-bright fish right off the tides. In 2016, they built the original Austral Kings Camp and ran their first season, which proved a huge success. Moving forward, the Austral Kings program consists of two separate yet closely related programs: the more rustic Austral Kings Camp on the upper river and the more comfortable Austral Kings Lodge on the lower river. The history of North American king salmon in Chilean waters is fraught with failed introduction efforts dating back more than 100 years. Ultimately, it was the release of PAGE 30

hundreds of thousands of lower Columbia River smolts by Japanese fish ranchers in the late 1970s that kick-started naturally reproducing stocks. Today, Chile has lots of productive systems, but Austral Kings is special and packed with big, bright and often finicky Chinook. For their first season, catch rates averaged roughly one fish per person per day with majority of the fish weighing in between 25 to 50 pounds. With that said, rarely is any time spent not covering fish, as the river has more bright kings than any I have ever seen. For skilled anglers wanting the challenge of gorgeous big fish in an awe-inspiring setting, Austral Kings is the place.

The Region and River The Austral Kings program is based around a single, steep, ultra-clear river that flows from the crest of the Andes to the central Chilean coast. The landscape is similar to coastal BC

AUSTRAL KINGS and the Lower Dean, and the headwaters are pristine and protected. The fishing is focused on the lower eight miles of the river where it slows somewhat, creating a series of interesting pools and runs. With tides that average 20 feet, there are lots of dynamic tidewater opportunities on runs that appear and then disappear as well as a large lower estuary where it is common to see fish rolling as you arrive in the region by boat. The upper river is turquoise-colored and runs through a lush green valley surrounded by glacier-capped granite mountains and has a variety of fishy structure, including gravel beaches, big boulders, classic tail-outs and deep runs. The region is very much a rainforest, with weather to match, but it can also be very warm during the summer months when anglers visit. While the river can rise quickly, it also drops quickly, making it a perfect place to target kings.

Fishing Program Anglers fish two per guide, most often using an assortment of smaller motorized boats to access prime water. Fishing will be done mostly from the bank, swinging flies, but there are a number of productive runs that are fished from the boat. Anglers at both operations will rotate through the upper river and lower river beats, meaning that some days you will fish relatively close to your accommodations and other days you will transfer to a more distant point to begin your day’s fishing. While the distances are not great, the roads are slow and often indirect so transfers can take upwards of 30 minutes.

Austral Kings Camp: Despite the remote location, this wilderness camp is Chilean “glamping” at its finest. Guests stay in two spacious double occupancy safari style canvas tents equipped with comfortable beds, chairs and storage. There is a bathhouse with two bathrooms, each with a hot shower, sink and flush toilet. All meals are prepared in the fixed camp kitchen and served in a large dining/lounge tent. While it would not be fair to call this camp luxurious, it has been thoughtfully constructed and is very comfortable. It is located in the middle of the upper river’s most productive reach in a spectacular setting near the river. Austral Kings Lodge: The lodge, which overlooks the fjord into which the river empties, is the most comfortable of the accommodation options. Here, all four guests enjoy single occupancy rooms with attached shower and bath as well as easy access to power and potentially cell service beginning in 2017. The lodge is built in Chile’s classic rustic style featuring lots of local hardwoods and natural edges. There is a wood-burning stove, a common sitting area and relatively easy access to the lower tidal reaches of the river and estuary. Season: January through March 2017 Rate: Austral Kings Lodge – $5,975 per person for a 7 night/6 day package, Austral Kings Camp – $5,225 per person for a 7 night/6 day package

In 2013, brothers Alex and Nico Trochine were confident that king salmon fishing in Chile had enormous potential if only they could find the...

In 2013, brothers Alex and Nico Trochine were confident that king salmon fishing in Chile had enormous potential if only they could find the...